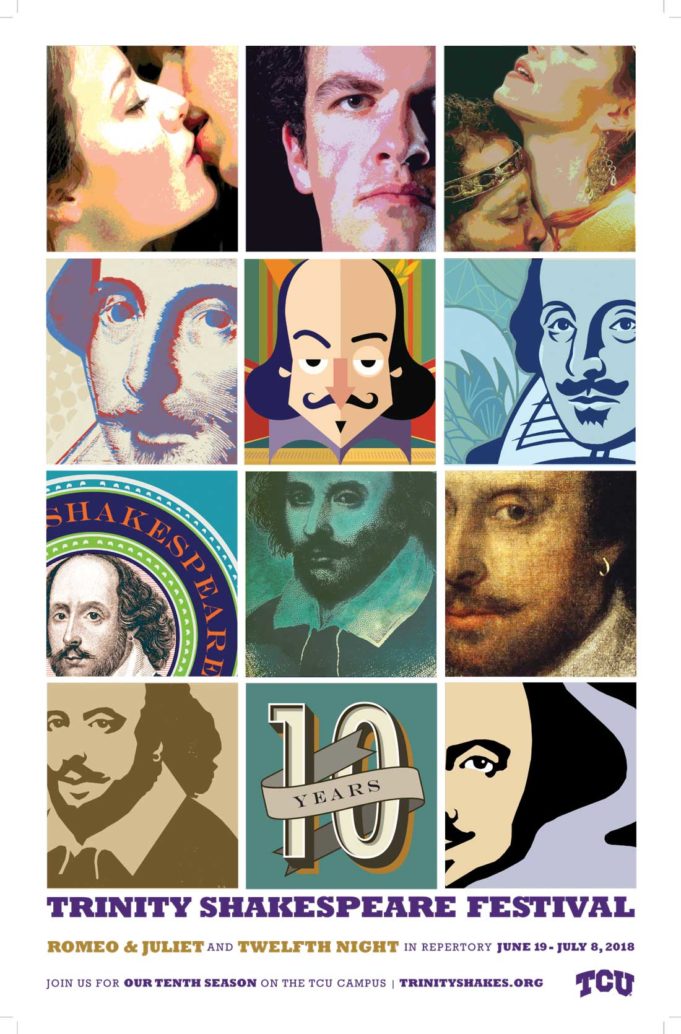 A vital sign of the health of a city’s arts culture is an annual summer Shakespeare festival of any variety: traditional or adapted, indoors or out. Fort Worthians, being of a more sensible taste than our neighbors to the east, prefer to watch old Billy Shakes’ iambs iterated in an air-conditioned venue, such as TCU’s Marlene and Spencer Hayes Theater, where the 10th season of the Trinity Shakespeare Festival is currently underway. This season’s tragedy, Romeo and Juliet, is a plotline most people in the English-speaking world can unpack in three sentences or fewer, but the comedy du saison, Twelfth Night, is a less popular yet more pleasant tale of gender-bending love triangulation than the Capulets and Montagues can offer.

In a staggering twist no one would have written, the Twelfth Night troupe was almost crushed by an injury that lead actress Jessica Turner sustained while in rehearsal. Turner, who was cast in the role of Countess Olivia, fell faint after rupturing an Achilles tendon in front of her co-stars. With little time left to search for the next leading lady, director Blake Hackler stepped up and stepped in to fill Turner’s corset.

Twelfth Night takes place on a mythical island called Illyria, where another leading lady, Viola (Kelsey Milbourn), has been torn apart from her twin brother, Sebastian (Branden Loera) in a catastrophic shipwreck. Washed ashore on foreign beaches, Viola assumes her brother to be dead, and to protect herself she masquerades around in men’s clothing and joins the ranks of service for Duke Orsino (Garret Storms) as “Cesario.” Unbeknownst to her, she’ll soon be lusting after her commander, who pines instead for the lovely Countess Olivia. Olivia adds her own angle to this triangolo de amore in her pursuit of Cesario. All the while, Sebastian is forming alliances on a nearby island to find his way back to his sister, eventually making him the harbinger of reality for one and all.

The subplot is the spring upon which most of the comedic relief takes off and in which our fool in fancy robes is Malvolio (Thomas Ward). Sir Toby Belch (J. Brent Alford), Sir Andrew (Richard Haratine), and a couple other supporting characters trick him into thinking the countess is holding her heart for him. Yet Malvolio’s pursuit of Olivia could fray the lustiest of lovers’ nerves, and our jester Feste foretells everyone’s fortunes in his songs.

Two of the most familiar faces on Fort Worth stages, Milbourn and Storms, delighted the audience with great consistency of character. Storms’ signature brand of tortured pining after an unrequited love played well as a counterweight to Milbourn’s innocent ingenue approach to the role of Cesario. Milbourn’s blocking in a swordfight gone awry called attention to her gender portrayal as betrayal in all the wittiest of ways. The men’s ensemble was an especially strong element of this production, pouncing on, around, and offstage with all the virility of a pack of puppies learning to growl through fence slats at passersby. That is to say, this entourage of young gentlemen kept the comedy as light as they were on their feet, moving and blocking with playful perfection. The women’s ensemble was over-the-top in terms of girlish giggling, which amplified their own giddy jabs at Milbourn.

To some of the crowd’s surprise, Haratine was the greatest standout character because he was also something of a standup comedian for this stage. His depiction of an overly confident, cowardly, drunken knight led other actors to engage more with the audience, mimicking his movements as he sat in the audience, kicked his boots up onstage, and danced a little too close to one lady in the front row. Then, of course, was Hackler, whose feminine charm as our madonna with the throaty voice could have been much more effeminate but instead was well-tempered to be subtly droll.

Although the new Marlene and Spencer Hayes Theatre is nothing like Shakespeare’s globe, the three-sided thrust stage rounded out the experience, especially as onlookers watched actors run down and behind the seating areas. Stationary flats were used to create the facade of a stately Georgian home that stood in firm contrast to the black metal of two spiral staircases flanking the estate. Double doors on a lower-level entrance were enveloped by white marble columns, white window frames, and a second set of French doors on the upper-level balcony. An eye-catching black-and-white linoleum pattern faux-tiled the floors with the shapes of chalices framed by a diamond pattern. If we’ve learned anything over the last 10 years, it’s that one of the most fantastical elements of any Trinity Shakes production is the masterful lighting work, designed by Tristan Decker this year. As seen in the gobo lights that gave scintillating morning and evening effects to the backdrop or the crisp white lightening strike that commenced the production, Decker knows how to enhance a set. Worth noting, too, that in the lightning strike and in a ring of light that was cast down on an imprisoned Malvolio, the bright white used to amplify these scenes is a powerful effect we would have never seen four centuries ago. These modern additions reinterpret the original intentions of our legendary playwright in oblique ways. Take also, for example, the anachronistic use of Georgian architectural elements or the phonograph, which suggest that a scenic designer isn’t afraid to plant unconventional details for the attentive theatregoer’s contemplation.

Cross-dressing and classically trained, this year’s Twelfth Night actors make for the ultimate collective of caricature personalities — just as Shakespeare would have wanted. The postscript on this play is that our expectations of gender were decided a long time ago, in a faraway land, where men wore wigs and acted as women onstage. In other words, our gendered reality is an arbitrarily predetermined set of decisions that society has since taken too seriously. It’s a shame we don’t see more dedicated thespians like Hackler stepping fearlessly into opposite sex roles. Those brave enough to do so might see more applause since, as Malvolio says, “Daylight and champaign discovers not more.”

Twelfth Night, or What You Will