GP: In compiling this list, I have endeavored to select goals that are not just examples of great skill, or execution, or teamwork, but goals of consequence. As a result, there are some very fine goals which have not made the list simply because there was an equally fine goal in the same match that was of greater consequence. Examples of goals that miss out as a result of the “consequential quotient” include Takashi Inui’s piledriver for Japan versus Belgium, Ola Toivonen’s sublime takedown and lob for Sweden versus Germany, and two Spain goals from the same game versus Portugal – the dizzying dribble and low long-range finish from Diego Costa and the amazing outside-of-the-boot knifing diagonal net-buster from Nacho. All that said, here is the list in order of my preference.

10) Philippe Coutinho (Brazil) vs. Switzerland
The little magician waves his wand-like right foot, bringing the ball under his spell and curls an unstoppable shot from outside the left side of the penalty area into the right upper 90.
https://youtu.be/k1QBdg5hiV4

9) Toni Kroos (Germany) vs. Sweden
Right-hand side of the penalty area, at an acute angle, in injury time. The game is tied when Kroos unleashes a curling, dipping shot that evades a packed six-yard area. Germany wins and keeps alive its World Cup, for now.
https://youtu.be/JDGR1ER-9Sc

8) Benjamin Pavard (France) vs. Argentina
The eventual World Champions trail Argentina in the second half of their last 16 match up when France full back, Pavard hits an absolute screamer high and handsome from right to left, arrowing the ball in from around 30 yards out.

7) Cristiano Ronaldo (Portugal) vs. Spain
It may have been the second day of the tournament but Ronaldo staked an early claim for goal of World Cup 2018. In injury time Portugal is trailing and their star man faces a Spanish wall, the ball placed atop the “D” of the penalty area. With his trademark technique Ronaldo produces a swooping, driving ball only he can summon and the goalkeeper knows there is no point in moving as the ball ripples the net up high to tie the game.
https://youtu.be/UxUxEC_Ruzc

6) Lionel Messi (Argentina) vs. Nigeria
The best player I have seen in my lifetime cuts an unfamiliar figure in the stripes of Argentina, often absent for long periods of play and appearing to lack the joie de vivre he plays with for Barcelona. A flash of the “real” Messi was displayed when his team most needed it, in the last group game with Argentina needing a win to be sure of making the last 16. Taking a looping through ball in stride, Messi mesmerizes both ball and defender before lashing his shot across goal past the valiant dive of Nigeria’s goalkeeper, Francis Uzoho. Argentina goes on to escape from the group, winning the match 2–1.
https://youtu.be/AL3CQ-UDe80

5) Edinson Cavani (Uruguay) vs. Portugal
Cavani had already netted a perfect header before he was set up by Uruguay teammate, Nahitan Nández. At full speed, Cavani meets the ball, contorting his body and opening up his right instep. As he curls the ball beyond the goalkeeper to burst the net into life low behind the far post, Cavani is almost at once dynamic, yet able to stop time itself.

4) Luka Modrić (Croatia) vs. Argentina
While this goal came in the middle of the group stage, it is consequential both for its beauty and as a perfect example of the gifts at the disposal of the winner of the tournament’s MVP award, the Golden Ball. From 30 yards out Modric twists left then right before opening up his body to the right to charm the ball from outside the frame of the goal clean into the back of the net. Sublime.
https://youtu.be/gK0-42ESoEo

3) Mario Fernandes (Russia) vs. Croatia
An unexpected entry from an unexpected Russian as Brazilian-born Fernandes was granted citizenship by Vladimir Putin in July 2016. This goal is not as spectacular as many on this list, but the glancing header technique is vastly underrated, and Fernandes shows it off to perfection as he redirects a curling free kick cross to the roof of the net, tying the game for the host nation deep in extra time. While Croatia would progress on penalties, Fernandes had all of Russia believing a place in their World Cup semifinals was possible.
]https://youtu.be/emQHXD1Xs8k

2) Nacer Chadli (Belgium) vs. Japan
Having come back from a two-goal deficit you could have forgiven Belgium for hanging on for extra time in this last 16 epic. Goalkeeper Thibaut Courtois had other ideas as he gathered the ball from a Japan corner to launch a late, late counter attack. Belgium cut through Japan with a couple perfectly timed and weighted passes the last of which is dummied by Romelu Lukaku to allow Chadli opportunity to steam in at the back post with a “calm as you like” low finish. A true “leaping from the couch” moment as Belgium wins with the last kick of the game to advance to the quarterfinals.

1) Kylian Mbappé (France) vs. Croatia
A star was born in Russia this summer as greased lightning Mbappé, a 19-year-old French phenom, shone every time he got the soccer ball at his feet. His tournament was topped off with a hard and low strike from 30 yards that befuddled the excellent Danijel Subasšić in the Croatia goal, landing France the Jules Rimet trophy and title of “World Champions.” Expect to see Mbappé in a Real Madrid shirt next season to replace the Juventus-bound Ronaldo.
https://youtu.be/eeYZ5y9AmOM

KL: Right, let’s get to my picks now. I particularly like the goals by Cavani, Ronaldo, and Coutinho, but I’m different from you, G.P., because I judge more on aesthetic grounds, though I’ll use importance in the game as a tiebreaker if need be. Here we go.

10) Denis Cheryshev (Russia) vs. Croatia
He scored a similar one against Saudi Arabia, too, and the highly touted prospect who seemed like a bust for Real Madrid emerged as one of the tournament’s newly minted stars.
https://www.youtube.com/watch?v=YmRMIsBz134

9) Dries Mertens (Belgium) vs. Panama
Look at the beautiful rainbow that this first-time volley makes on its way into the far side of the net.
https://youtu.be/bXQhLp0hl_o

8) Angel di María (Argentina) vs. France
The Paris St.-Germain attacker may or may not be past it, but he can still make moments of magic like this goal out of nothing.
https://youtu.be/CLuHGuKCFpM

7) Ivan Perišić (Croatia) vs. France
This one’s a team effort: the free kick delivery by Ivan Rakitić, the cross by Šime Vrsaljko, the little touch by Domagoj Vida back to Perišić, who juggles the ball onto his (slightly) weaker left foot to lash it into the net.
https://youtu.be/SLjsZtZ607o

6) Ricardo Quaresma (Portugal) vs. Iran
He’s like Arjen Robben, a one-trick pony whose trick always works. This Quaresma special called a “trivela” with the outside of his right foot put his team in front.
https://youtu.be/tTtVI5xoaiA

5) Mohamed Salah (Egypt) vs. Saudi Arabia
Boys and girls, this is how to execute a lob. Pretty good for a half-injured player, albeit a world-beater when he’s healthy.
https://youtu.be/lVMbpTnkenQ

4) Juan Cuadrado (Colombia) vs. Poland
The finish is good, but this goal makes the list because of the pass from James Rodríguez. Well might Los Cafeteros break out the dance routine after that.

3) Hirving Lozano (Mexico) vs. Germany
Part of this is for the skillful buildup play by Chicharito, but Chucky’s touch inside past the defender (Mesut Özil, really) and the cool finish past Manuel Neuer’s near post are something to behold.
https://youtu.be/mFUYIKgwgPY

2) Ahmed Musa (Nigeria) vs. Iceland
He flicks the cross straight up to himself and then volleys home. What control! You could argue for his second one against Iceland, too.
https://youtu.be/p9LxxjCiP_c

1) Benjamin Pavard (France) vs. Argentina
This one should be the dictionary definition of “thunderbastard.”
https://youtu.be/wjPP928yGU8 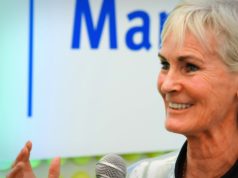