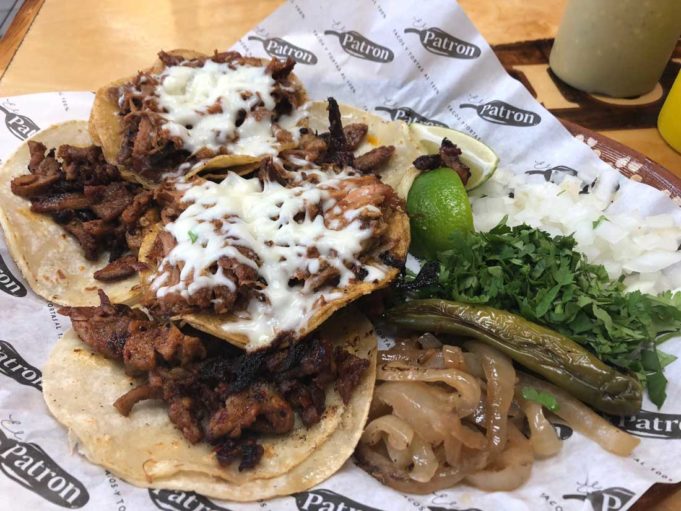 I have a friend who stops at garage sales every time he comes across one. It’s the biggest reason I stopped meeting him for lunch on weekends – he’d show up half an hour late with stories about how he talked down some young couple $4 for used scuba gear, a porcelain frog, or a 20-year-old 4-iron.

I feel that same moth-to-flame obsession with gas-station taco joints. I know I write about them a ton (about every two or three months, lately), but I try and only share news of the good ones. Also, I had a great piece on Kokitos (6708 Camp Bowie Blvd, 817-732-2820) already in the bag when, to my horror, I was scooped by Malcolm Mayhew of Fort Worth magazine, who dropped his piece on the decadent dessert/fruity drink purveyors last week. (Am I going to have to start paying attention to FWTX? I’ve never really had competition on the obscure Mexican food beat.)

But if there’s one walk of which I’m cock, it’s the gas-station/convenient-store taco. (Back off, Malcolm.) For my latest discovery, I didn’t exactly dredge the depths of the North Side.

The last time I checked in on the restaurant space conjoined to the Shell station on North University Drive, the occupant was Redneck Tacos, a decent enough but Anglo-fied version of the real stuff. There’s nothing inauthentic about the space’s new inhabitants, El Patron 2 (1050 N University Dr, 817-624-3744), the second of the tiny Dallas-based taqueria chain’s three outposts.

El Patron’s windows are covered in blown-up pictures of the kitchen’s fare –– and these weren’t exactly staged by a food stylist. There are a few picnic tables outside on the cheery-considering-the-setting patio, with a view of the pumps and the logjam traffic on Jacksboro Highway.

Inside, the place is well decorated with clay pots, attractive serving platters, and various other bric-a-brac hanging on the walls and positioned attractively on shelves. A TV blaring a Spanish-language courtroom drama was the only ambience, save for the chatter of the other folks in the half-full dining room of about eight sturdy wooden tables.

Behind the walk-up counter, there’s a television displaying a slideshow of about a dozen pictures of menu items. These guys really like to take terrible photos of food.

On the day of my visit, it was dollar taco day but only for trompo (not to be confused with Trumpo, who would just wall off the place *rim shot*), which is almost exactly like al pastor, down to the rotating-spit preparation. Patron’s version is infused with pineapple and sans the normally chalky red spices of pastor. The tender meat is charred on the edges and served on double-ply corn tortillas, with the customary cilantro, onion, and lime accompaniments. Just a warning: The habanero sauce is criminally spicy, so go easy. It took me a full glass of water to regain my sense of taste.

I felt guilty about spending only $3, so I sprung for two piratitas ($1.89), a tostada-like morsel with melted cheese and, on my version, well-seasoned hunks of carnitas.

The one big downside to this gas-station taco place is its lack of a bathroom – you’ll want to wash your hands after interacting with all of that delicious grease. I wandered into the Shell station next door, which is a story unto itself. Inside, there’s a cell phone provider, a gift shop that sells knives, lighters, and trucker hats, an electricity company, and 40-liners everywhere. And that’s before you even get to the 14,000 drink varieties.

But the bathroom is for only their customers, and I didn’t feel like laying down a fiver for an “I’m with Stupid” hat that would just ultimately end up in a future garage sale.