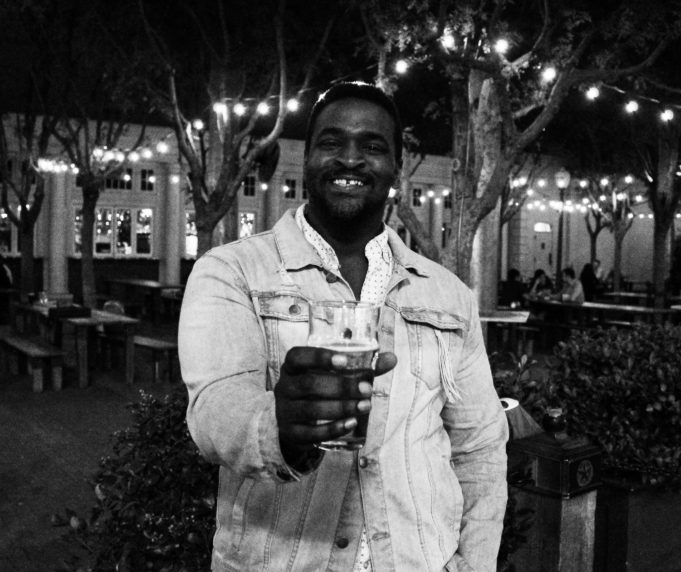 Near Southside stalwart Tony Green recently won the readers’ choice for Best Male Celebrity in the Weekly’s annual Best Ofs. The tall, charismatic Pied Piper always pulls a crowd. We recently sat down at Flying Saucer Fort Worth to chat about politics, Fort Worth culture, and craft beer.

Green is keen on craft suds.  He has extensive service industry experience, most recently at Kent & Co. Wines and La Zona.

“I get to influence the choices we put on tap” at Kent & Co, he said. “We have a lot of Oktoberfest stuff coming out right now. It’s not my personal favorite, but I think Rahr is doing a lot of great stuff. I like Collective’s sours.”

I asked about the recent incident where Green and his compadres stumbled upon a large group of alt-right chauvinists (“Proud Boys Crash Local Pub” September 12) at Ye Olde Bull and Bush. Green briefly spoke to a Latino male in the group, querying into the man’s choice to join a far right group.

“He was a person of color,” Green said. “I thought, ‘Let me try to figure out where this guy is coming from.’ ”

Looking back, Green sees the Proud Boys’ incorporation of women and minorities as a veiled attempt to appear inclusive. He has a genuine curiosity about movements that cultivate divisions along arbitrary lines such as gender and race. Green’s childhood informs his worldview. He was adopted by his white mother and black father when he was very young. Growing up with black and white siblings taught Green that love is colorblind.

I quipped that Green is our city’s “happiness ambassador.” Apparently, I tapped into something that Green has spent a lot of time contemplating.

“Happiness is an effort, and I often choose it,” he said. “It’s a choice. It’s not like being gay. It’s an actual choice. I don’t always have happy days. I’m happy 78 percent of the time. That’s a real number.”

Staying in the happy space requires time alone to recharge and reflect on life, he continued. His best advice for finding happiness is to “surround oneself with good people.”

“I have an amazing group of creatives who surround me and encourage me to do what makes me happy,” he said. “That’s very fulfilling.”

Another thing Green is happy about is senatorial candidate Beto O’Rourke.

“I’m going to volunteer at one of the call centers,” Green said. “As a country, it does feel divided. That is disheartening. It makes me want to have conversations [with those on the right] and then work from there.”

This year’s BeerFeast is a long-awaited homecoming for Flying Saucer Fort Worth. Marc Castaldo, the iconic brewpub chain’s general manager, reminded me that the outdoor beer festival used to be held in the parking lot behind its old location (now Bird Cafe). This Saturday, the marquee event returns to its old stomping grounds via Sundance Square Plaza. There will be 120 carefully curated beers on tap

“Bobby Jones and I do our best to pick the best,” Castaldo said. “We chose what we feel is a broad spectrum of styles. It’s not all big, giant beers. There will be some sessions, Europeans styles, saisons, IPAs — kind of a bit of everything. We like to make these events open and inviting to novices as well as beer nerds. It will be a great Saturday afternoon for people to try beers they normally wouldn’t try.”