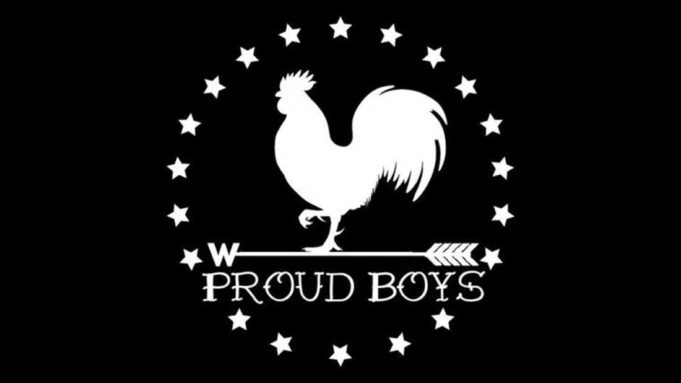 An alleged “pro-Western fraternal organization for men who refuse to apologize for creating the modern world,” the Proud Boys were founded in 2016 by conservative media personality Gavin McInnes, who, once upon a time, cofounded Vice magazine.

McInnes’ Proud Boys, whose uniform includes black Fred Perry polos with yellow stripes, are generally thought of as an alt-right group, though McInnes, in an effort to distance them from alt-right’s racist connotations, prefers the term “alt-lite.” On Saturday night at Ye Olde Bull and Bush near the Cultural District, a few of my friends ran into about 20 of these jagoffs, and my friends said that while the group members were vague about their beliefs, they were explicit in trying to be intimidating by the sheer number of their bodies. Katreeva Phillips, a local playwright and musical theater composer, arrived at the bar to meet some friends, one of whom was surrounded by a group of men dressed “in these really lame uniforms, black-and-yellow shirts and Doc Martens.”

Phillips asked her friend what was going on. “And then I was immediately surrounded,” she said. “They started talking to me. … It was maybe 10, 15 minutes before I could even get to the bar to get a drink, because they wouldn’t stop. Any time I would ask a question, another Boy would come up and engage. … Every word was met with another scare tactic of them surrounding me, but they wouldn’t tell you what their opinions were other than that they believe in restoring Western culture, the way American culture is supposed to be.”

Jay Wilkinson, a local artist who, like Phillips, frequents the Bull and Bush, was at the bar with his friends, bartender Tony Green and carpenter Brandon Pederson. Wilkinson said they ended up thronged by an ever-increasing circle of Proud Boys after Green engaged in conversation with one of their members.

“I looked around and saw all these guys,” Wilkinson said, “and I didn’t know who they were, but there were 11 or 12 of them standing around, and when [Green] started talking to one of them, that’s when they all started to come over.”

Green, who is African-American, remarked on their presence. “I was just saying how crazy it was that the Proud Boys were at the bar, and then this guy turns around to me, this Latin guy, and he was like, ‘Well, what would it mean to you if I was a Proud Boy?’ And I said, ‘Well, we need to talk, because you’re a person of color.’ ”

Wilkinson said two or three guys came over and asked what was going on, and at that point, Pederson told them to leave his friends alone, which prompted even more Proud Boys to join their circle.

“I felt like I was going to change the mind of this person,” Green said. “I was like, ‘You’re brown, you’re a person of color, I’m gonna change your mind, I’m gonna fix this,’ and as more and more people started showing up, I realized that wasn’t a possibility.”

The Proud Boys engaging Green were nonspecific about their beliefs, he said. “It wasn’t racism,” Green said. “It was mostly women-hating. … That’s where I had a big disconnect. … I never felt discriminated against as a black or a gay person, talking to this guy. I was more of the mindset that they’re about oppressing women.”

As for McInnes’s presence, I showed a photo of him to Green, Phillips, and Wilkinson. They all confirmed that he was there, sort of hovering in the back of the sea of black polos. What they were doing in Fort Worth is anyone’s guess.

As the conversation escalated and the crowd of Proud Boys thickened, Wilkinson corralled his friends and left before things heated into a confrontation. “They were standing around like some kind of Ninja Turtles gang,” Wilkinson said, “like a bunch of soccer hooligans.”

When Wilkinson and company reached their car, the bartender came out and apologized for the encounter.