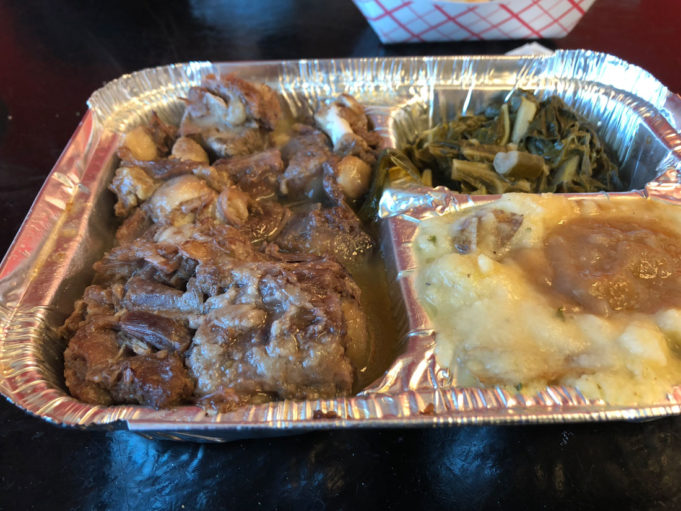 I had to pull over after almost swerving into another car when I read “Italian Soul Fusion” on the façade of the tiny ramshackle yellow and green standalone building on McCart Avenue. I had questions, like, Huh? Who? How?

The concept became clearer after my guest and I walked into the three-table dining room/walk-up counter of Mungie’s Italian Soul Fusion (5612 McCart Av, 817-361-7374). The place isn’t so much an Italian/Soul fusion as it is a tale of two menus. In other words, you can get Italian or soul food, but it’s not like the kitchen cranks out chicken-and-waffle lasagna.

This is just a guess, but I’d bet money that the irresistibly charming ownership team of Anita Hughes and Edwin and Karen Hill are soul food impresarios who took over a space that was already set up for slinging pizzas, and thought they’d broaden their appeal by serving both styles. Despite the apparent lack of fusion in the cuisine, I was still fascinated. I mean, name me the other black-owned Italian restaurant in town.

I knew I’d like Mungie’s when I heard “Feels Good” by Tony! Toni! Toné! blaring overhead – though the tune was a little drowned out by a too-loud television. The vibe is every bit a mom-and-pop, and quirks abound: There’s no bathroom, so you have to go to a nearby gas station if nature calls, plates are served in tin foil to-go containers and doled out as soon as they’re done cooking, and the flatware is all plastic. The staff’s personable charm more than makes up for those mild inconveniences. The decor leans more Italian than soul, with red and white brick walls, old bottles and decanters on shelves that line the ceiling, store-bought art of waiters and chefs, and a few pics of regular diners.

On our recent visit, the daily specials appeared on a dry-erase board near the door, and my brain never got past the ox tail ($14) with two sides. The slow-cooked meat fell off the bone into the glossy-rich broth that coated the tongue with umami. The unique collard greens, whose flavor draws from smoked turkey instead of the customary pork, are a must-try. (The kitchen doesn’t use pork at all, btw –– always turkey.) My “smashed” potatoes, topped with brown gravy, were under-seasoned but still made an excellent dip for the housemade cornbread.

I couldn’t resist trying a slice of the floppy, fold-y New York-style pizza ($2.59), topped with real cheese, pepperoni, and fresh herbs –– but not the bell peppers and onions I had ordered. Still, the dough and sauce were fresh tasting. Also from the Italian side of the menu, my guest’s lasagna ($8.99) was served in a pool of bright, zesty marinara, with ooey, gooey cheese strings hanging from the fork after every bite. Steam rose from the accompanying garlic bread when you tore it open.

One of the owners brought us a sample of the house navy bean soup, whose rich, flavorful broth tasted of what I now understand to be Mungie’s signature flavor: smoked turkey.

The restaurant’s framed mission statement hangs on the wall, and, among the other promises it makes customers, features the mantra “Always fresh, always affordable, always friendly.” Though I’ve only been once, on my visit, the Mungie’s crew held up their end of that bargain.

As my guest and I chitchatted with the staff on our way out the door, one of the women handed me a pizza tray. “We’re not a full-service restaurant,” she said, implying we should bus our own table. “We don’t have waiters.”

Mungie’s may not be fusion, but it’s my kind of place.