For those of us who grew up in the John Hughes era of mall culture, eating in a food court feels as elemental as Grandma’s kitchen table, so when I visited the newly opened Food Hall at Crocket Row (300 Crockett St, 817-810-9076) – about a dozen restaurant concepts under one (16,000-square-foot) roof – it felt like my childhood on steroids. Of course, ’80s-era Ridgmar Mall didn’t have Chefs Victor Villarreal and Joshua Harmon slinging grub.

Having great chefs in small spaces (some as small as 100 square-feet) is, after all, the point of the Hall – to bring the very best fast-casual eateries together in one space, so you’ll be assured quality and variety each time you visit. There’s even a cool-looking cocktail bar serving, among other libations, a pretty darn great Moscow Mule.

On the day of my first Hall experience, the crowd was sparse, and there were a few bored-looking vendors who may have been just as desperate for conversation as business. The first place I had wanted to try since the PR folk announced the Hall was Abe Froman’s of Fort Worth, the brainchild of pop-up darling Villarreal, whose food I was first introduced to when he manned the spatula at the dearly departed Sera Dining & Wine. 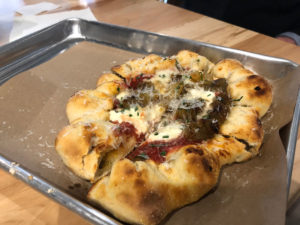 Abe Froman’s purveys decidedly upscale individual pizzas, all with Villarreal’s signature twists. The place’s namesake pie ($14.50) was everything I’d hoped for: pillowy-soft, steaming crust stuffed with spicy sausage, then on top of the pie, fresh-tasting marinara, housemade ricotta, shaved Parmesan, a tasteful dab of pear relish, and more sausage. The spicy-sweet interplay between the relish and the meat was as interesting a flavor as I’ve encountered in a long time.

Perhaps the biggest-name chef to sign on to the Hall is also the most notorious name in the Dallas restaurant scene, John Tesar of Top Chef fame. His concept, Knife Burger & Bar, which occupies a prominent corner spot in the Hall, has been ballyhooed by critics all over the state. The Ozersky ($5.95) wasn’t the largest burger – imagine if a White Castle and a Fred Burger had a lovechild – but the premium-grade meat was cooked a beautiful hue of pink and relinquished its juices upon the first bite. Its minimal accompaniments of melted American cheese and sautéed red onions allowed the beef to steal the show – and what a show it was. The crispy, well-seasoned fries ($2.99) are a must-try.

Always a sucker for a good lobster roll, I headed straight to The Dock on my next visit to the Hall. Unlike my first trip, the place was packed like a bustling nightclub. The Dock is the first outgrowth of a popular food truck and offers a menu that will look familiar to anyone who has spent time on the East Coast. My All-In Knot ($13), a mélange of super-fresh-tasting lobster, crab, and shrimp meat served on a split-top butter roll and drizzled with mayo, was a picture of elegant simplicity. Speaking as a lobster roll snob, this one is worth your time and money.

A barbecue joint that serves non-Texas-style ’cue in Fort Worth could be considered a scandal, but Not Just Q, which adapts techniques from both the Texas and Kansas City schools of barbecue, gives diners the best of both worlds. My Texas brisket sandwich ($11) was slathered in a lighter, more vinegary KC sauce, which didn’t drown out the otherworldly juicy meat, which featured a nice smoke flavor and intense-tasting bark.

I ended on a sweet note from Press Waffle Co., which serves both sweet and savory versions of the delicacy. My Southern Belle ($8) was big enough to feed a 1998 Renault full of stoned teenagers. The airy, sweet confection was topped with lemon curd, the biggest blueberries I’ve seen outside of Willy Wonka movies, and whipped cream.

Maybe I’m biased because of my mall-crazed youth, but the Hall already feels like a comfortable spot for me to gorge with impunity.