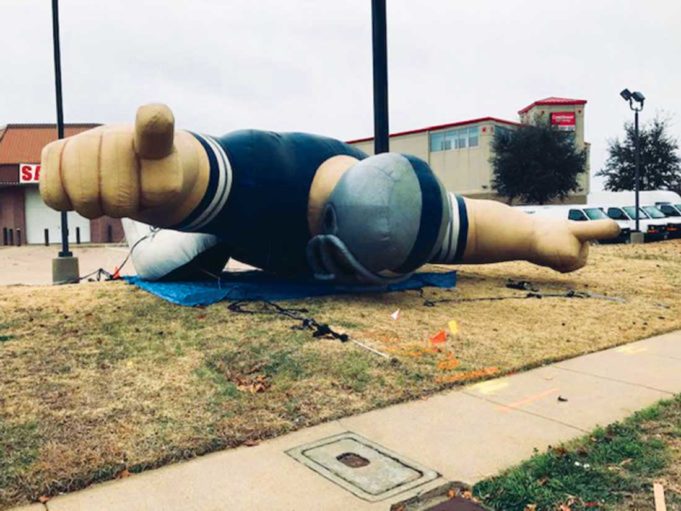 Twenty-three years separate the Dallas Cowboys from their last NFC Championship game. A humbling 30-22 loss to the glitzy Los Angeles Rams in the divisional round on Saturday means the fans will have to wait at least 24 years before they have a chance to watch the Cowboys play in another one. After a gutsy win over the Seahawks in the Wild Card game, the Cowboys found themselves wholly mismatched against the Rams. The silver-and-blue defense managed to force L.A. to punt only once in nine drives, and the Cowboys’ beleaguered offensive woes — problems that they seemed to have put largely behind them — frustratingly resurfaced, inhibiting them from keeping pace. The “run the ball and stop the run” identity that the Cowboys had established over the second half of the season completely fell apart and was indeed the exact weapon used by L.A. to defeat them, like an upjumped knight in Game of Thrones run through by his own sword.

Dallas’ third-ranked run defense was gashed all game long, something that might not be a surprising note in a post-game summary, considering the Rams have a top-five running game led by perhaps the most electric running back in all of football, Todd Gurley, but most of the dominance came from chubby, oft-released backup C.J. Anderson, who wrecking-balled his way for 123 yards and two touchdowns. Gurley got his, too, in limited work, adding 115 yards and a score on just 16 carries. That made this the Cowboys’ worst game against the run all year. In fact, the combined 273 rushing yards are the most allowed by the team in the postseason ever, narrowly topping the 269 yards managed by Eric Dickerson and Co. of these same L.A. Rams way back in 1986. Conversely, reigning rushing champ Ezekiel Elliott managed just 47 yards on 20 carries, getting stuffed repeatedly by the Rams’ big interior defensive linemen. With all of this, the Cowboys demonstrated that they simply aren’t yet ready to compete with the league’s top-tier teams.

Unless it ends with your quarterback hoisting a football-shaped hunk of metal under a shower of confetti, there’s always plenty of heartache when your team has played its last football of the year. The offseason is a long, lonely void, leaving plenty of time for unsatisfied fans to dwell on the hows and whys of their team coming up short. Angry fans will have their pitchforks in hand, ready to storm the Star and demand their vengeance. The most likely targets of silver and blue-bleeder’s ire will be the holy trinity of Cowboy fandom’s favorite scapegoats: quarterback Dak Prescott, head coach Jason Garrett, and offensive coordinator Scott Linehan. The way the once-lost season played out may leave bloodthirsty fans with their gallows decidedly more empty than they might prefer.

Garrett-Bot may be unnerving and maddeningly generic during press conferences, but his teams consistently play hard for him week after week, regardless of record or circumstances. He helped lead a 3-5 team to a divisional playoff game, and he deserves some credit for that. As sick as I am of literally everything about him, the last five seasons (barring those torpedoed by injuries) show he has a decided knack as a leader of men. His team loves him, which counts for a lot in this league. Plus owner/GM/$250 million yacht purchaser Jerry Jones has made no indication that Garrett is due for anything this offseason but an extension.

Over the last several weeks, Prescott reminded football fans that what he lacks in the skill set normally required to play quarterback he more than makes up for with the fire in his belly. The kid might not be able to throw a receiver open, but he’s a winner all the same. His determination is unrivaled. I’ll take my chances with him in a one-possession game in the fourth quarter any day. And like Garrett, Jerruh is committed to him, so he’s not going anywhere but to the bank to cash a $100 million contract.

That leaves Linehan. I’ve been of the opinion that even if the Cowboys had won the Super Bowl this year, Linehan had to go. Nothing demonstrates what a detriment his predictable play-calling is in today’s NFL than seeing the alternative in the team on the other side of the field. The Rams’ head-spinning backfield motion, play action, and patient adjustments at the line of scrimmage had the Cowboys linebackers running in circles and whiffing at ghosts, making one of the better defensive units in the league look pathetic. Rams head coach Sean McVay again demonstrated just why every scoring-hungry GM is looking to clone him and his A Beautiful Mind offensive schemes. He’s the future of the league. The Garrett/Linehan model is as outdated as the T formation.

Linehan will probably be the fall guy and deservedly so. I’d give anything to see the Cowboys offense with a mind like McVay’s calling the plays. Will Jerry pull the trigger, and will Linehan’s ouster be enough to satisfy sanguinary fans? Will it prove to be the missing piece to help the Cowboys take the next step to becoming a team that belongs on the same field as the Rams, Chiefs, and Saints? We now begin the 360-some-odd days wait to find out.

Who Could Have Predicted It? Only Everyone