The basketball roster thinned again this week as the news broke that beloved guard Jaylen Fisher is out for the remainder of the season because of continued injuries related to his multiple knee surgeries. The junior hopes to receive a medical redshirt for this season and transfer to continue his playing career elsewhere. TCU is honoring his scholarship, and the Tennessee native is attending spring classes while receiving treatment to rehab his knee. It is the third consecutive week that a purple player announced his intention to leave the university, though the motivations have varied. It’s disheartening to lose Fisher. He had been the highest-rated recruit in school history and shown flashes of offensive brilliance despite being plagued by injuries throughout his tenure in Frogville.

The deflating departures didn’t stop the team from garnering some feel-good publicity for the program. A video circling the interwebs documents a TCU police officer entering a team meeting looking for TCU sophomore Owen Aschieris with a concerned look. Walk-on guard Aschieris sheepishly walks to the front to confirm his identity to the officer, who hands him a sheet of paper with a scholarship offer for the spring term. Aschieris’ teammates excitedly frog mob their comrade, who had spent the previous season as a scout-team member for the Horned Frog women’s squad. It’s not often a volunteer player is financially rewarded in the world of Division I hoops among literal giants and tiny rosters. Aschieris had appeared in five games this season, seeing time late in the game as the Froggers hosted the West Virginia Mountaineers last Tuesday.

Coach Jamie Dixon needed his squad to scoop a conference win after disappointing losses at Kansas and Oklahoma last week. West Virginia scared the Red Raiders and Cyclones in one-possession losses but remained winless after four conference match-ups. The Neers’ luck did not improve in Funkytown. This game wasn’t close. It wasn’t even close to close. The first 10 minutes of play laid the foundation for a defensive struggle as both teams needed multiple possessions for each successful bucket. Dixon’s boys seemed in control despite scant scoring before the purple tsunami crashed over the hapless West Virginia squad. The good guys scored only 18 points in the first nine minutes before adding 30 more in the remainder of the half to take a comfortable 48-28 lead into the locker room. Nothing changed after halftime. The scoring extravaganza continued for purple nation. At times I felt compassion for WVU coach Bob Huggins and thought the referees should institute a “running-clock” like they do for YMCA and middle school leagues when games get out of hand. TCU picked up its second conference victory of 2019 with a commanding 98-67 dismantling. Six of the eight TCU players finished in double-digits, and Desmond Bane mesmerized with 26. Newly minted scholarship recipient Aschieris had the fewest of the Frogs but padded the stat sheet with two field goals for four points.

It’s possible the Frogs thought they were going to the real Manhattan, got off the plane, and were so disillusioned they lost their will to play basketball. Dixon and company started slowly against the other purple team in the Big 12. The funky ballers fell behind by seven points immediately and could never seem to overcome the slop of playing against a K-State team that thrives on snail-paced games when shooting percentages are low. Senior Alex Robinson brought TCU within one point of the Wildcats midway through the first half but never secured a lead. Our Color Purple out-rebounded the Wildcats and shot a similar percentage from the field. K-State owned the free-throw line, appearing almost twice as often. Frog freshman center Kevin Samuel struggled to defend in the paint and fouled out of the game, allowing opposing forwards to seal the froggy fate down the stretch. The horned hoopers scored only 55 points, losing by 10 –– their worst total of the season and well short of their season average near 80.

Everybody’s Working for the Weekend

The good news is that the entire conference decided to struggle on the road this week. Not a single Big 12 team traveled to victory on Saturday. West Virginia earned its first conference win by one point against seventh-ranked-at-the-time Kansas of all teams. Baylor handed Texas Tech a second straight loss, and Texas gave OU the alright, alright, alright with Matthew McConaughey sitting on the bench. Our boys enjoy a home stand this week, hosting the burnt-orange bovines on Wednesday and the Florida Gators on Saturday in the SEC/Big 12 challenge before heading for the dive-bar of our state to tip-off against the Red Raiders in Lubbock on Monday. There is no clarity of who is controlling the conference with a four-way logjam for first place. The Frogs are 2-3, but a positive week could put them in the mix at the top of the standings. 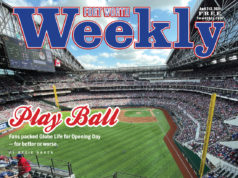 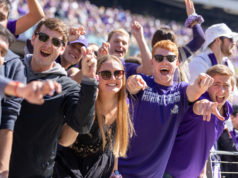 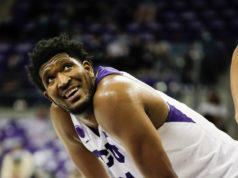