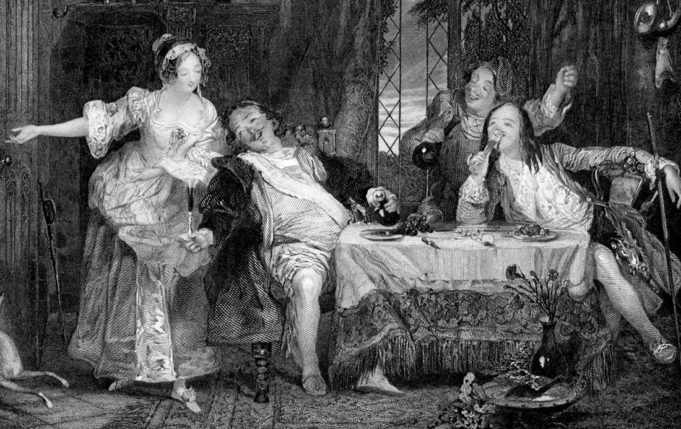 I’m not sure if the group of twentysomethings dining at Wabi House (1229 8th Av, 817-720-3099) a couple of weekends ago got lost on their way to a frat house, but I know pretty much everyone else in the dining room was annoyed by the table’s bizarre, noisy shot-taking ritual, which apparently required everyone to pound their fists repeatedly on the table while chanting, “Oggy, oggy, oggy, oi, oi, oi.”

My guest and I, who were seated at the bar, exchanged incredulous looks and laughs with staff as the pack of four guys and three gals broke every rule of dining out over and over again – not to mention that it put a mild damper on what was an otherwise flawless evening of food, drinks, atmosphere (noisy drunk kids notwithstanding), and service.

There must be something in the air. A few days later, a friend and I were trying to enjoy our weekday lunch at Angelo’s BBQ (2533 White Settlement Rd, 817-332-0357), when we were taken aback by a nearby diner’s obnoxious, loud potty mouth. He was talking shop with a few of his coworkers and dropping more f-bombs than nouns. There weren’t any kids around, and I’m far from a pearl-clutching prude, but a few other folks seated at nearby tables stared daggers at the dude, though he never took notice or stopped.

These experiences got me to thinking: What’s the etiquette on dealing with jackasses at a restaurant? Whose responsibility is it to stop such buffoonery? And why in the world do certain people’s boundaries erode when they’re seated at a restaurant’s table? As a friend’s grandmother used to say, “You ain’t home.” I’ve been on just about every side of these kinds of scenarios, and it gets a little tricky.

For the people working at those restaurants, it’s a lose-lose scenario. Back when I was in the hospitality business, especially when I tended bar, I encountered all sorts of annoying and even aggressive customers. I was always torn between asking the belligerent party to calm the F down and risk losing their tips or seeing if the person or people would quiet themselves down after another drink. I’ve even waited it out in the hopes that someone who wasn’t in a position to lose income (another customer) would handle the situation for me. Other guests would almost never intervene –– they’d just leave. So I’d end up losing more money by not handling the distraction.

On the other hand, I’ve misread that situation before, and it backfired. I once asked a group of women seated at my bar to turn down their volume knob a little, and the entire bar turned on me. I was cut early that night – a pariah at my own job.

A couple of times, and after a bit of liquid courage, I’ve been the guy at the next table who asked the offending a-hole to pipe down. Needless to say, that colored the rest of my night. On one occasion, the blowhard and I exchanged barbs and tense stares the rest of the evening, and he grew intentionally louder with every word. So that was a swing and a miss.

The only responsible answer is this: If you’re feeling annoyed by another customer at a restaurant, ask the manager to jump on that grenade. She or he will either ask the vulgar cretin to STFU, ignore you and let the situation persist, or, as was the case at Wabi House the other night, buy you a round of drinks. For the record, we never complained. I think the staff was either sensing we were annoyed or just grateful we hadn’t left.

Of course, the best practice is not to behave like a jerk at a restaurant in the first place. That’s what bars are for.