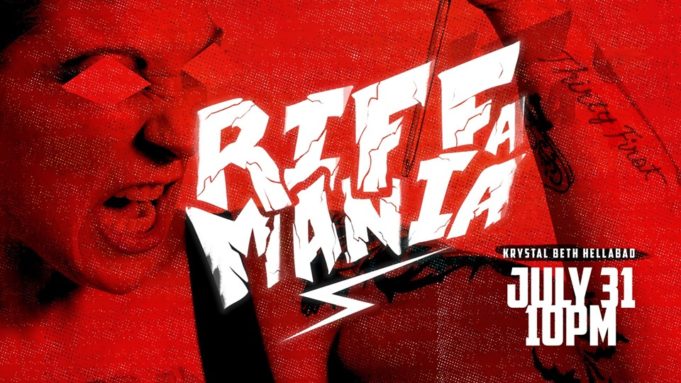 1) Riffamania’s latest episode, entitled Summer Slammadolla (because the audience is encouraged to slam a dollar or otherwise convey a dollar onto the stage to help cover the cost of the show) is on Wednesday night from 10pm to midnight, and the invite verbiage mentions “vivid characters from another dimension,” so maybe that means there’s a sci-fi element to the comedy troupe’s insult comedy combat bits. Either way, Riffamania gets funnier each time, and it’s free, and MASS (1002 S Main) is air conditioned, and it’s a pretty fun way to while away a hot summer night. Show these insult goons your support by showing up and flinging a ball-up single their way, sort of like going to a strip club, except none of the performers will pressure you into a lap dance. Well, maybe Sexecutioner will, but only if you ask him nicely. Riffamania is R-rated, so 21+ only. Free, starts at 10pm. This FW Weekly Toast and Jam bit was recorded for the previous episode:

2) Pennywise plays the Granada Theater November 19, and tickets are $30. Authority Zero opens, and I will be posting about this again four months from now. But anyway, Jacob Furr plays at the Post at River East (2925 Race Street) on Thursday night from 7 to 9pm. The show is all-ages, and parking and cover are free. Jacob Furr got a haircut and beard trim recently, showcased in this video, along with three new songs:

3) Stoner rockers Vorvon are finally giving their new EP The Space a formal release show on Friday night at Lola’s (2736 6th St). Though the 12” record has been available at Doc’s and other local stores since March, I’d say it’s been off the radar for local heavy music fans. I bought it back then, and I’m maybe a little biased (because I used to be in Vorvon), but I can assure you that it is a satisfying slab of sci-fi themed cosmic boogie and fuzzed-out riffage. Hoof and Ox Combine fill the opening slots, making the bill a veritable filling station for your heavy metal fuel tanks. Feel free to top ’em off. Show is all-ages, doors are at 8, show starts at 9, and cover is $10. This Vorvon video is seven years old, shot at a bar that no longer exists, the Moon:

4) Hello, I’m Tony Green films its third episode on Saturday at Shipping and Receiving (201 S Calhoun). It’s called a Midsummer Night’s Green and features a performance by Meach Pango after it wraps. Not sure what the content of this episode will entail, but Tony recently got his very own Doob figure, which, if you’re unfamiliar, is a 3D-printed statuette of oneself. Of course Tony had one of these made, but the show will undoubtedly be a good time. It’s free and starts at 8:30pm. Here’s a teaser trailer about the show:

5) Also on Saturday, there’s a benefit at the Boiled Owl Tavern (909 W Magnolia) for RAICES, the non-profit agency that provides free and low-cost legal services to immigrant children, families, and refugees. You can donate on the Owl’s Facebook page or at the bar the night of, which features DJ sets from WIZARDVIZION vinyl jokesters DJ Son of Stan and DJ David Hellabad. The party gets down around 9. Bring some cash to help out or drop some at the link above. Want to know more about RAICES? Watch this video: