I don’t share many commonalities with famous French physician and astrologer Nostradamus aside from my French-Canadian heritage. His predictions were so obtuse that his followers have credited him with correctly predicting everything from the Great Fire of London to the rise of Hitler. We won’t peer through a telescope or use a star map to prognosticate Horned Frog destiny but combine history, Las Vegas odds, and pure instinct to brew a cauldron of optimistic outcomes. I’m already batting a thousand: Transfer-senior quarterback Alex Delton was named the official starter on Tuesday, as I predicted. Let’s see what else I can intuit about the Frogs’ season.

No one cares about this game nationally unless we lose. A young backup safety will blow coverage at some point and the shutout along with it. Frogs win 49-7

The Boilermakers are middle-tier Big 10 and not to be overlooked, especially considering how they walloped Ohio State last season. Coach Gary Patterson’s veteran secondary helps to eke out a victory amid a hostile environment with a crucial second-half turnover in TCU’s favor. Frogs win 27-21.

Little brother will remain in his proper place. The Mustangs have neither the defense nor the confidence to threaten their rivals. Upsets are always possible, but in Fort Worth, the ponies won’t find a miracle this year. Frogs win 42-14.

The Jayhawks have caused Patterson more trouble than the health department has Yucatan Taco Stand. The loss of former offensive coordinator Doug Meacham to the XFL should help TCU assert themselves against these bottom feeders. Untimely errors keep the score closer than necessary, requiring the purchase of many $7 beers for spectators. Frogs win 24-21.

Cyclones coach Matt Campbell has led his squad into relevance, but Patterson bested him with a decimated team last season. Sophomore quarterback Brock Purdy is the player to watch. A special teams TD from star wideout Jalen Reagor elevates his brethren into a Top 20 ranking. Frogs win 21-17.

Frogs win because Fort Worth is the best city in the conference bar none.

Start painting signs for ESPN’s College GameDay. An undefeated match-up between the Horns and Horned will draw Kirk Herbstreit’s U-Haul full of spray tan to Cowtown. Texas’ imposing defense, along with the running ability of burnt-orange quarterback Sam Ehlinger, will blemish the previously undisturbed eastern portion of the Frogs’ record. Frogs lose 35-31.

The hangover from the previous week’s loss stifles the offense when traveling to Stillwater, a location where hangovers of all types are common. The Frogs surprised the Cowboys last year with the help of third-string senior quarterback Grayson Muehlstein. History fails to repeat as coach Mike Gundy’s always competitive squad overwhelms the TCU secondary. Frogs lose 35-28.

I’d never pick the Bears to win. Coach Matt Rhule has changed the green and gold complexion to defense first with a strong running game. The ghost of disgraced former coach Art Briles still muddies the Brazos, and Baptist prayers fall on deaf ears in the Fort. Frogs win 31-24.

New coach Matt Wells is still explaining to Lubbock-ites what a defense is. Raider fans can throw tortillas or batteries or whatever they’d like. Delton will throw bombs to Reagor. Lots of them. Frogs win 49-31.

Sooner coach Lincoln Riley is essentially a younger version of former Tech coach Kliff Kingsbury with less sex appeal. Their refurbished Alabama quarterback Jalen Hurts has an embarrassment of weapons at his disposal. The Sooners don’t lose to the Frogs often. It does happen but won’t this year. Frogs lose 45-35.

Neal Brown – former head coach of Troy – will be near the end of his first big-boy season and shouldn’t be expected to win more than seven games without (now Carolina Panther quarterback) Will Grier tossing the rock. Avoiding a trip to Morgantown is always a plus. Frogs win 35-14 and cap off their season at home with a 9-3 record, missing out on the Big 12 championship –– a Red River rematch between the Sooners and Longhorns –– but good enough for third place in the conference and yet another trip to the Valero Alamo Bowl. 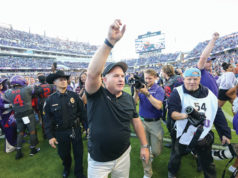