Nearly three years ago, married couple Brandon and Jessica Burnett co-fronted a folk-punk outfit they dubbed the Phantom Sensation, releasing the concept album Blackgrass Express in fall 2016. Over the rollicking stomp of the music, the Burnetts and their bandmates wove a gothic tale of a woman on a quest for revenge, trapped on a train full of lost souls. It was fun and ambitious, but after a couple of years of playing the same songs and dealing with hassles of lineup changes and the have-to’s of adult life, the couple let the Phantom Sensation subside. But even without a vehicle to carry their tunes, they continued to write. Now known simply as Burnett, they’re debuting a new set of songs this Friday, releasing them in a new album, Blood Gold. 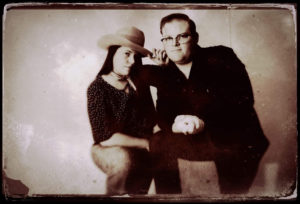 Over some early-evening drinks at a local bar, Brandon and Jessica Burnett chatted excitedly about their new songs, making videos, and their inspirational trips through Terlingua, Marfa, and Texas’ legendary past. “We had a bunch of songs that we took to Cloudland [Recording Studio], the same place we did the Phantom Sensation stuff,” Brandon said. “We’ve been sitting on these songs for a couple years now, and we wanted to do music videos, so we brainstormed, came up with some ideas to take the themes from the songs into music video stories.”

Once they finished their recording, they focused on the visual component of their project. The first of these videos, released last week, is for the song “The Deep Ditch,” recorded and edited entirely on an iPad. It’s a fun little DIY short, framing its tale of double-crossing treachery in some scenic shots.

Visual storytelling has always driven the Burnetts’ songwriting, and while their new album doesn’t follow a singular narrative like Blackgrass Express, it unfolds as a series of vignettes unified by a central theme rooted in Texas’ colorful mythos.

“Its about these characters who are driven by myths of gold in Texas,” Brandon said, explaining that even the Marfa Lights are rooted in that trope.

“The historical marker [at the Lights’ viewing spot] talks about the idea that they’re the ghosts of conquistadors still looking for gold in the hills,” he said. “We didn’t necessarily write about the historical facts in Texas, just the idea of the characters in our songs being driven by myths and fantasies. They want to be immortal in a way, to fill a void with riches and gold and the thrill of the chase.”

Brandon said Blood Gold’s vibe is somewhere between “Gunsmoke and The Twilight Zone.”

Musically, the new tunes are similar to their previous outfit, but after Jessica called an audible shortly before their recording session, she and Brandon revamped all their tunes. “I said, ‘We can’t do these songs like that,’ ” she said, referring to the Phantom Sensation’s full-band approach. “So we re-did all the music, how we played it, and how we sang it, just did it as a duo.”

Blood Gold is just Brandon and Jessica, their vocal interplay harmonizing over his guitar and her banjo, harmonica, and tambourine.

“When we rearranged the songs, Jess pushed me to be more dynamic,” Brandon said.

“He just wanted to yell everything,” Jessica said.

“But playing as a duo, as Burnett, I have to actually sing,” Brandon said, laughing.

Thus Burnett is clearly an evolution of the pair’s songwriting. Phantom Sensation is now a creature of the past, lurking in their musical backstory like a ghost clinging to the ruins of some ancient West Texas town. Yet for all the duo’s fascination with cinematic storytelling and macabre themes, it’s their hearts beating out the rhythm of their songwriting. No matter what rubric they work under, their music will unfold in the form of aural gothic mini-movies.