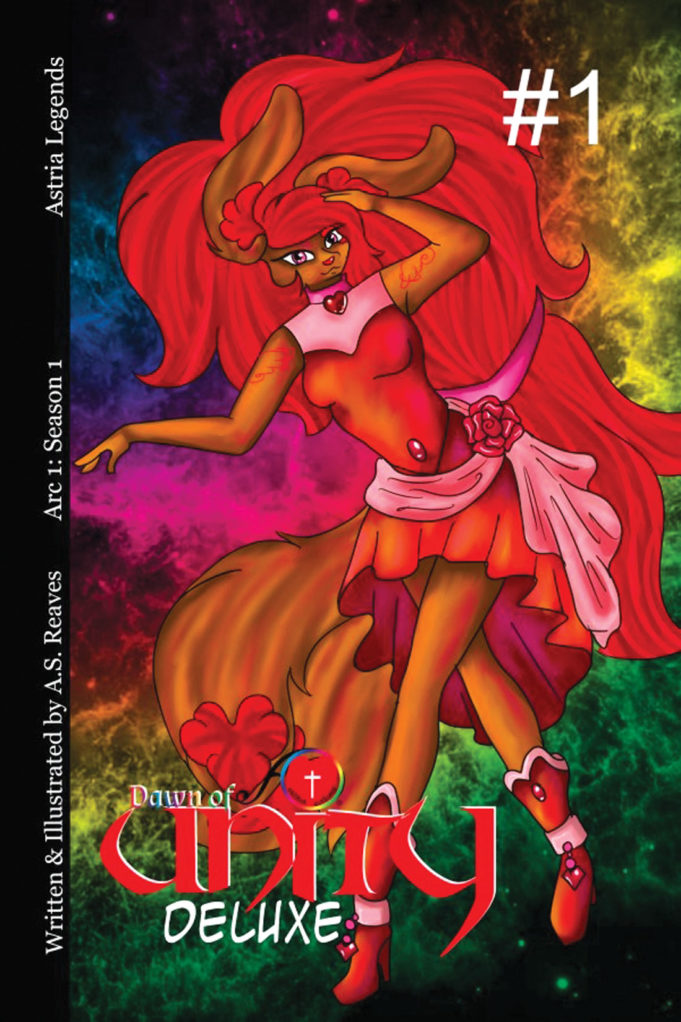 Glued to my phone in a semi-crowded coffee shop the other day, I found myself deeply perplexed and mildly confused and amused by a digital download of the inaugural issue of Dawn of Unity. Imagine a watered-down Inferno that was written and illustrated by Lisa Frank from the mid-1990s. That’s the easiest way to describe Dawn of Unity.

Written and illustrated by Fort Worthian Amanda Reaves, the 40-ish-page comic book shows us a world very much like our own. In this world, good – in this case, unity – and evil – generically referred to as sin – are always butting heads, leading to chaos. The physical embodiment of these concepts, which have been around since the beginning of literally everything, are three races of beings: the Astrians, their sworn enemies the SINs, and a group of beings who died with more evil than good in their hearts known as the Zavi.

Like any good lore, there’s a clearly established hierarchy in Reaves’ epic tome. At the top is the God figure, “The Exalted One,” followed by the appropriately named Empyress Rainbow Unity, who is an almost-8-foot-tall angelic being who, you guessed it, is made up of all the colors of the rainbow. (The rest of the Astrians, SINs, and Zavi are usually just one color on the spectrum, with each hue representing a different moral concept that’s either good or bad).

Unity’s main task is said to be “to restore the balance of the galaxy, whether that means destruction or rebirth,” Reaves writes. Unity is, at this point, like a horrifying mix of the most misguided traits of Thanos and Darth Vader, were she not a clearly established benevolent force. But, hey, Thanos and Vader both did what they set out to do, and, in the end, the greater good prevailed, thanks in part to the bad guys’ actions. Maybe Unity is onto something.

The prologue describes unity as a web spun by the Exalted One with Unity figuratively or literally – it’s a little confusing at this point – at the center. The intricately woven web of unity that the entire universe is a part of is incredibly fragile, and if the center is tampered with, it all falls apart. The web structure makes Unity just as much a protagonist as a plot device. There must be some reason for her to appear. Due to her overpowered resting state of existence, once she depletes the massive amount of energy she requires, and the reason no longer exist, neither does she.

Reaves’ illustrations are what makes it all flow. She told me that she was inspired by Sailor Moon and Rainbow Brite. Her art reflects a lot of her manga inspirations.

Character development, while not lacking, is incredibly quick. At times, it feels like the story is just flying forward without much context. However, the giant humanized critters leap out at you, leaving you wondering who is good and who is bad, and captivate you to keep reading.

The heavy use of color in Reaves’ comic seems like an obvious metaphor for things like everybody getting along and not always being black and white. The characters’ personality traits do a great job of blurring the lines of right and wrong. From the Zavi, who are easy to sympathize with, to Unity herself, the characters are complex and well crafted.

Unity’s task is more of a burden to her and is used to explore the broader social issues that our actual world faces. Questions like “Do humans have any redemptive qualities?” and “Can a truly inclusive universe exist?” are just some of the social justice warrior themes throughout.

This first issue is technically the third installment of the storyline. The series began as two 200-page graphic novels: Genesis, published in 2010 by Infinity Publishing, and Exodus, from 2015 by Upland Avenue Publishing, both of which can be found on Amazon. Reaves recently released the second issue. “I switched to comics because people like it better,” Reaves said. “This is my passion project.”