The best things at the 13th version of the Lone Star Film Festival came during its latter half. This isn’t to be wondered at, as the festival devoted its last day to repeat screenings of its prize winners. The film that won the best documentary prize was Netflix vs. the World, and while I can’t be sure, I think it does appeal to more than just cinephiles like me who think hard about how films are distributed. I think Netflix subscribers everywhere will be interested in this, partly because documentarian Shawn Cauthen interviews numerous people from Blockbuster Video, detailing how the vanquished competitor wanted their share of the DVD delivery market but trusted their web interface to a Houston company called Enron (oops) and then balked at paying $50 million to buy Netflix (bigger oops). Even with this, Blockbuster was making a dent in Netflix’s business with their Total Access program that allowed customers to return DVDs at the Blockbuster stores, but Carl Icahn and his merry band of venture capitalists shut the program down. I wish the filmmakers had included more on whether the company’s algorithm is truly recommending what people want, as well as the aesthetic experience of watching at home versus on a big screen. However, it’s good that somebody says Netflix makes crap like Bright and The Cloverfield Paradox in addition to their Oscar winners.

Just Mercy is old-fashioned Oscar bait starring Michael B. Jordan as Bryan Stevenson, the real-life Harvard-trained lawyer who set up a foundation in Alabama in 1989 to take prisoners off Death Row. In a film starring Jordan and Brie Larson, I wasn’t expecting Jamie Foxx to steal the movie away as the wrongfully convicted killer whom Bryan frees as his first success story. Too often we forget that Foxx is capable of greatness when he’s given the chance, but he does fantastic work as a man whose faith and personality inspire hope not only in the other prisoners but also in his young attorney. I’m a bit concerned that Destin Daniel Cretton’s filmmaking seems to be losing its distinctiveness since his debut Short Term 12 (which, like all of Cretton’s films to date, involved Larson), but his film manages to get its point across without hammering it.

I was less enamored of A Hidden Life, because Terrence Malick plays so precisely to type in telling the story of Franz Jägerstätter (August Diehl), the real-life Austrian conscientious objector executed for refusing to fight for the Nazis. Malick gives us anamorphic lenses, actors filmed heroically from below, heartbreakingly beautiful shots of the Alpine countryside (plus those magnificent rococo churches they have in Austria), and agonized monologues about our purpose on Earth, all at a length of three hours. The movie addresses what a Christian is to do when the government is evil, but Malick’s filmmaking no longer does much for me.

The best thing I saw at the festival was Ladj Ly’s Les Misérables, which is neither an adaptation of the Broadway musical nor one of Victor Hugo’s novel. Rather, it’s a French version of Training Day, as a rookie cop on his first day (Damien Bonnard) goes for a ride-along with two Paris detectives and discovers that his white boss (Alexis Manenti) uses his badge to grope underage girls on the street with impunity. Ironically, his black Muslim boss (Djibril Zonga) is the one who shoots an unarmed black boy point-blank in the face, and the whole thing is filmed by a kid with a drone. The film turns into a tense cop thriller — I like the French term, policier noir — as the three officers try to recover the drone footage before it gets out, while the neighborhood is ready to erupt in violence among blacks, Muslims, and Romani, with the cops becoming everyone’s target. Amazon is distributing this, so you’ll likely have a chance to see it.

I wasn’t able to see nearly as many short films as I wanted to, but I enjoyed Sachin Dheeraj’s documentary The Bubbleman, about Joseph “The Bubbleman” Losoya, an Air Force veteran who dresses like a hippie and shows up on Texas State University’s campus in San Marcos to blow soap bubbles and help the students work out stress. David Velez’ Ladybug is a funny short about a boy who seeks revenge on his older brother for killing his pet insect, and the funniest short I saw was a Spanish import, Camilo Castro and Ricardo San Emeterio’s Grandma’s Pie, a wordless animated film about an old lady in a medieval village who goes about baking an apple pie while a dragon eats and otherwise kills knights in the street. 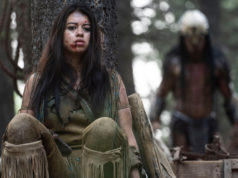 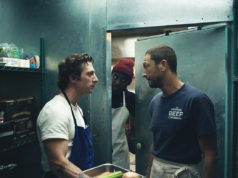