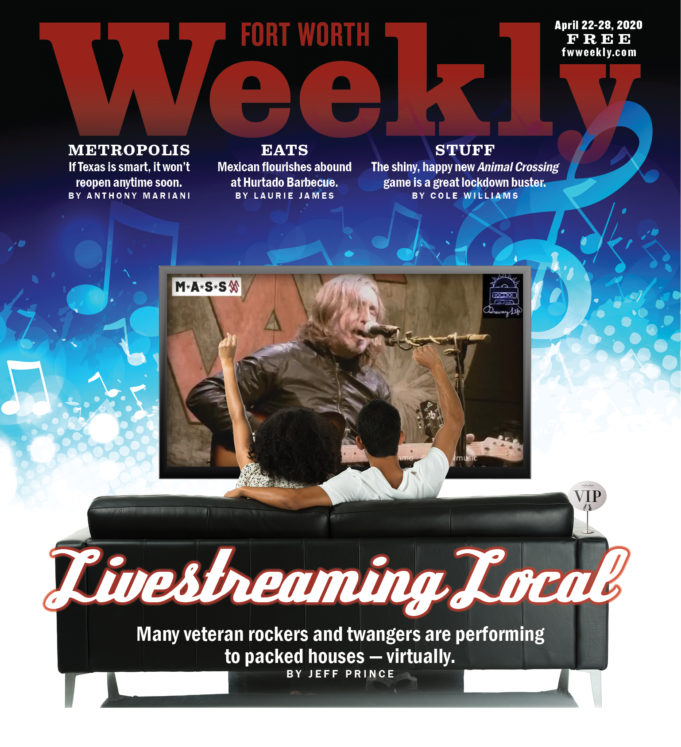 Way back in 2020 B.C. –– Before Coronavirus –– working musicians weren’t prone to livestreaming performances. Live shows in packed clubs were their livelihood. Giving away the goods online made little sense. Artists didn’t want fans sitting at home watching a screen. The entertainers wanted boots on the ground, butts on barstools, and warm bodies on the dance floors applauding, creating a vibe, guzzling drinks, tossing bills in tip jars, and buying CDs and T-shirts.

In March, COVID-19 changed all that. The bars and music venues are shuttered. Events are scrapped. Livestreaming is the best way to reach fans, and musicians are flooding social media with impromptu videos.

“It’s actually been a fun and different way to connect with people,” said Kris Williams of Danni & Kris. “It’s been a great way for people who live in other states to watch us, who normally wouldn’t be able to. The feedback has been positive, and we’re getting more requests, engagement, and merch sales.”

The indiepop duo has livestreamed several shows from home in recent weeks, usually on Wednesday evenings. Tips come in via online payments. The money doesn’t match what the band was earning at club dates, but the duo had few expectations since the pandemic had created financial hardships for so many people. Danni & Kris just want to remain linked to everyone.

“We aren’t sure what the future looks like for live performances, so we’re still planning to livestream even after things are opened back up,” Williams said.

Hearing Brandin Lea play a show in years past meant bellying up to a sticky bar, doing shots with friends, and dripping sweat –– and maybe blood –– by night’s end. You know –– rock ’n’ roll. Lea, a songwriter, producer, and sound engineer, has been one of North Texas’ most celebrated rockers since his former band, Flickerstick, won VH1’s Bands on the Run and was signed by Epic Records almost 20 years ago.

By contrast, Lea’s recent shows are formatted like everyone else’s these days –– sets performed in empty rooms. Viewers don’t touch or breathe the same air but chat with one another in real-time in the comments section and send little red hearts and blue thumbs spiraling across the screen.

“I agreed to play after hearing from so many people on social media that it would provide some relief in the midst of this ongoing catastrophe,” Lea said.

Playing to empty tables and chairs was “bizarre but not necessarily in a bad way,” he said. “It doesn’t in any way, shape, or form replace having a live audience with a pulse, who you feed off of and collectively create a physical live experience. Like everything else, it’s got its pros and cons.”

Among the pros is wider audience appeal. Some local artists are lucky to draw 50 people to a live show. MASS’ livestreams are drawing thousands of viewers. Ending livestreams once the clubs reopen makes little sense now, Lea said.

“Streaming is not brand new, but with the rules being so drastically changed … there will be no choice but to embrace that streaming will be very much a part of the future of live music,” he said.

MASS co-owners Ryan Higgs and Jon Carney already had the technology in place because they are also co-owners of the Fort Worth Vaqueros soccer club. Carney provides commentary for their livestreamed games.

“It was pretty easy for us to do this,” Higgs said. “We saw the writing on the wall that [clubs] were going to be closed.”

“We immediately saw the viability,” he said. “It was kind of astonishing.”

The numbers have fallen in April. Many artists are livestreaming shows from their homes, and Facebook has become saturated with them. MASS cut its webcasts back to Fridays and Saturdays, although Higgs realizes that livestreaming will remain as part of the post-pandemic business model in some manner.

Blake Parish, frontman for the hard rocking Royal Sons, has been livestreaming “quarantine jams” with accompanist Kris Luther and seems to be having as much rowdy fun as he does during bar gigs. The whiskey flows, the guys become animated, and the music rocks –– to a degree.

“I don’t feel quite as satisfied as getting to play a gig in front of people, but getting to scratch the itch and forget about this stuff for a little while is probably the best part,” Parish said. “The money has been pretty decent. All the donations, big and small, mean a great deal to me. People have really gone above and beyond to help us out.”

He sees more livestreams in his future.

“This has opened my eyes to new possibilities,” Parish said. “Maybe virtual tipping is the new way to do things or at least in addition to what we already do. Streaming is a great way for people to feel like they are a part of something even when they can’t make it in person.”

On March 20, James Talambas debuted LOOM (Live Online Open Mic) on his Facebook page. The musician and music producer at New Media Recordings has continued livestreaming the open-mic every evening since.

“We’ve had videos of live performances, but what makes this particular moment special –– and what I try to bring to LOOM –– is a direct personal engagement with an artist, the ability to share in that moment with others in real time, and seeing an artist in a more natural and intimate setting than you could have at a bar or venue,” he said.

Talambas has hosted more than two-dozen shows, with some artists receiving more tips online than they might have received during live shows, he said. Booking guests for a daily webcast is labor intensive, he said, but he plans to continue them post-quarantine.

“Our format enables more access for artists to directly reach a wider audience, have a deeper connection with their audience, and make money immediately and without overhead,” he said.

Keegan McInroe has been livestreaming via Facebook on a daily basis for weeks and doing virtual song swaps on Instagram. He jams with American artists at 7 p.m. on Mondays and European artists at 1 p.m. on Thursdays. Tips are welcome, but McInroe views the events as therapy for himself and his locked-down listeners.

“My intention and hope is to be a calming, positive resource for those who choose to tap in, to love on people, and to provide a small source of virtual community and fellowship on a daily basis,” he said.

The pandemic forced him to cancel all of his live gigs in Texas for the near future, and he nixed an upcoming European tour as well.

“Financially, I have taken a pretty good hit,” he said. “Fortunately from years of professional hobo-ing, I have my overhead down to almost nothing. I am used to living on very little when needed. Despite the drop in income, I have found the online shows rewarding, though I am certainly looking forward to getting back to the in-person experience.”

He will continue livestreaming once he resumes his club dates, although with less frequency. The videos, he said, are another way to stay in touch with friends and fans and [to] market new material.

“I had actually been thinking about doing more online shows before all this started,” McInroe said. “I had already ordered an HD camera for my computer. I would have probably gotten a nicer one had I known it would be getting so much use. And I was thinking of maybe a monthly online thing, so this has been a great learning experience for that.”