The steps of the Tarrant County Courthouse were packed with hundreds of banner-wielding protesters when I arrived around 6 p.m. yesterday. Community organizers took turns rallying the men, women, and children who had gathered on East Weatherford Street that day in solidarity with black victims of police brutality.

“There will not be power to the people until you stand up and vote,” one female speaker said through a megaphone to loud applause.

Standing near the south of the largest protest group yet, a volunteer with event organizer United My Justice yelled, “We’re taking one small loop. This is history.”

The crowd turned southward and began an hour-long march through downtown Fort Worth. Shouted refrains of “black lives matter,” “George Floyd,” “justice now,” and “Donald Trump can eat a dick” reverberated throughout downtown. Several cars honked their horns in solidarity with the protestors.

As the march returned to the steps of the courthouse, event organizers announced tomorrow’s plans: a gathering in the West 7th corridor (specifically, Chuy’s Mexican Restaurant) late afternoon. Around 7:30 p.m. by the courthouse, several event organizers encouraged the protestors to return home ahead of the city’s 8 p.m. curfew. Most did, but around 100 remained.

As the crowds slowly dispersed, I found Kelly Wolffe. The Mid-Cities teacher said many of her public school students are black.

“Being a white woman, I want to show them that I am here for them in solidarity,” she said. “If this is the least that I can do, I will certainly do it. Today was powerful. I loved all the speakers. I’ll probably be here on Thursday.” 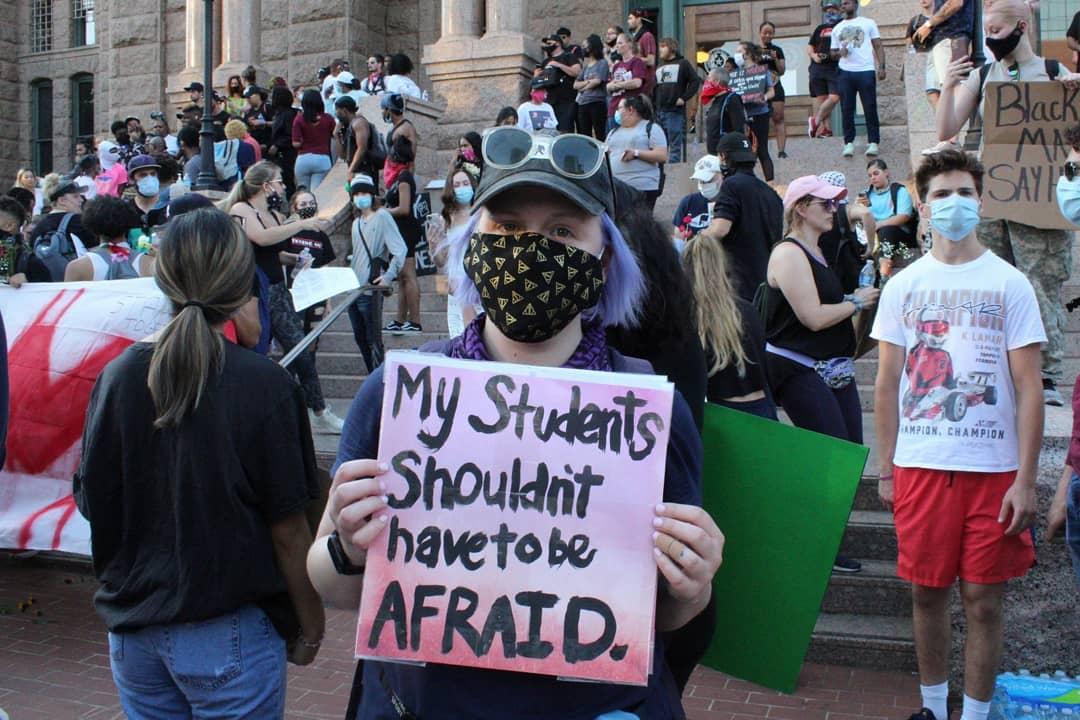 Downtown resident Britanny had a bundle of burning white sage in her hand, something, she said, to “cleanse the air of bad energy.”

Police brutality, she continued, “is getting out of hand. It is time to take a stand. We’ve had enough. No more thoughts and prayers — just straight actions. This is sweeping the nation. Never has it been able to sweep the nation. Too many people are outraged. I think it will continue for a very long time.”

It was clear that a contingent of around 100 was preparing to break the city’s 8 p.m. curfew order.

He paused, and the crowd began to cheer.

“Don’t even get me started on that idiot,” he continued. “Make sure you are at the November polls.”

Chants of “Vote! Vote! Vote!” erupted from the crowds.

Several Fort Worth police bike officers blocked the entrance to Main Street. They made small talk and cracked jokes with nearby protestors. By 8 p.m., around 100 demonstrators remained. A Fort Worth police helicopter made several low passes over the crowd. By 8:15 p.m., the bike patrol backed off, leaving only a few police SUVs visible on the streets leading to and from the courthouse.

The protestors, many of whom appeared to be in their early 20s, were upbeat. They shared stories to remind one another of why they were there. One young man said his relative was shot and killed by a police officer. If riot police came, the group agreed to meet at the nearby campus of Tarrant County College.

Around 9 p.m. the protestors formed a line and took a knee in preparation for what many thought would be a confrontation with police. Many anxiously watched nearby buildings for signs of riot police or the National Guard units that have been called in to crush protests in other large U.S. cities. Around 17,000 National Guard units have been deployed across the country to respond to civil unrest, but none were seen in Fort Worth that evening.

Many decisions that night were spontaneous, the result of collective will rather than singular leadership. The protestors rose without warning and began marching down Main Street. A nearby officer was noticeably surprised and ushered a young black man over to cautiously warn against the decision.

The first destination — Sundance Square Pavilion — ended with a brief rally and shouts of “Peaceful protest.”

The square couldn’t hold the crowd’s newfound excitement. Shouts of “Let’s move!” prefigured a march toward Bass Performance Hall. Swarms of police bike officers did their best to cut off traffic ahead of the spontaneous march. Black police SUVs stayed one block behind the protestors. Later that evening, one officer explained to the protestors that the positioning of police vehicles is intended to protect the marchers from anti-protester vigilantes who may intend to use their car to maim and kill.

Several nearby paddy wagons and a heavy law enforcement presence from the Tarrant County sheriff’s department were a reminder that mass arrests could result at any time, but law enforcement that evening appeared to be under orders to deescalate situations as they arose. At one point that evening, several protestors walked toward a police SUV with their hands up. The three vehicles backed up and left the scene.

Several dozen protestors arrived back at Tarrant County Courthouse around 10 p.m. Various factions among the group argued over whether to stay or to call it a night. At the request of the crowd, three police officers joined the protestors in taking a knee. The officers then began having open conversations with the remaining young men and women.

One black officer said that race absolutely informs how he views his job. He would have marched alongside the protestors that day if he were allowed to.

“How do we make change?” one young black man asked.

By voting, the officer replied. You have city councilmembers, a mayor –– those are the people you need to hold accountable.