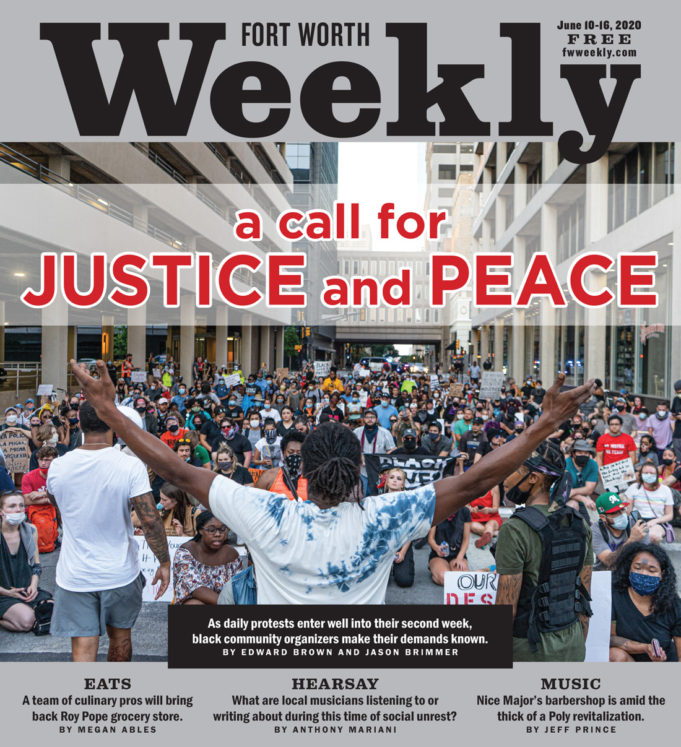 Against a backdrop of several hundred protesters and signs calling for criminal justice reform, one of the protest organizers, Nysse Nelson, addressed the crowd. 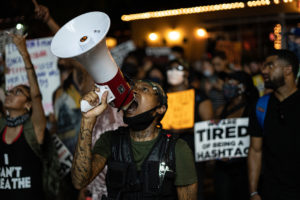 “Hey, listen up,” she said at the intersection of Currie and Crockett streets in the heart of the West 7th corridor during last Friday’s march. “This is their one motherfucking nightmare. They do not want us in the middle of this establishment. But guess what? We here. We gonna be back in this bitch tomorrow and Sunday, Monday, Tuesday, Wednesday, Thursday, Friday, Saturday.” 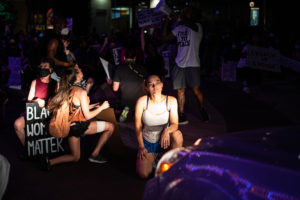 The crowd erupted by chanting the days of the week in turn. 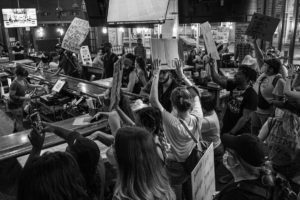 The protests in Fort Worth and across the globe started daily on May 29 in response to the killing of George Floyd, a black man, by a white police officer as three nearby officers looked on. In Fort Worth, the marches have mostly happened downtown and in the West 7th corridor. The West 7th bridge, the scene of tear gas and heavy-handed police arrests on Sunday, May 31, has become a symbolic crossing point where downtown marchers converge with West 7th marchers.

While similar protests have been met with bloodshed elsewhere in the country, Fort Worth’s rallies have been comparatively calmer, largely due to efforts by protest organizers to forbid rioting, looting, and any form of violence. Donald Trump’s response to the national unrest, decried as callous by dozens of former U.S. military generals, has been to call for the forceful crushing of protesters. Trump has threatened to deploy federal troops through the Insurrection Act of 1807. 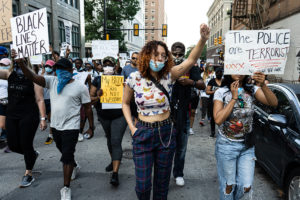 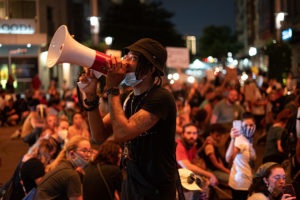 The protesters whom I spoke with understand that movements that seek to more equitably redistribute power and wealth have, historically, been met with violence. Fort Worth police department crossed that line on May 31 when riot police used tear gas, rubber bullets, and pepper balls (that disperse tear gas) after frozen water bottles were thrown at police (something protesters dispute). Dozens of protesters were arrested that night, which has led for calls that all charges be dropped from the night that protesters call “the police riot.” Early the next day, Mayor Betsy Price ordered an 8 p.m. curfew to address the unrest. The order was allowed to expire on Thursday. 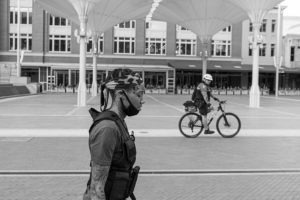 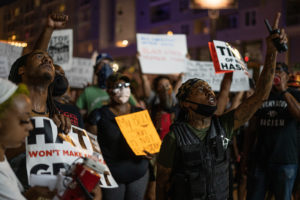 A standoff ensued Monday evening outside of the Tarrant County Courthouse as protesters confronted a wall of Fort Worth police bike officers. A call by protesters for the officers to kneel was honored by the officers in a night that ended with handshakes, hugs, and verbal acknowledgments that “not all police are bad.” 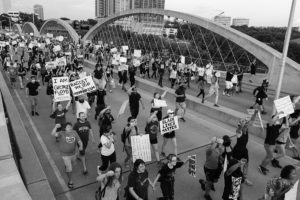 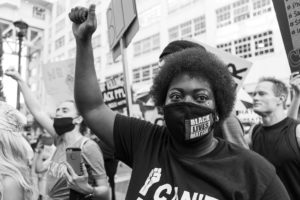 After a massive march through downtown Tuesday evening, around 100 protesters 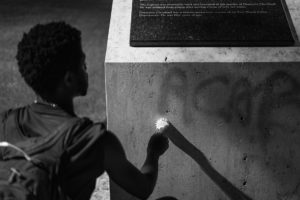 remained out past the 8 p.m. curfew. The gathering began marching spontaneously after dark through Sundance Square. Given the heavy police presence, many in the group were expecting to be arrested. After returning to the Tarrant County Courthouse, protesters and a handful of bike police ended the evening with open discussions on policing policies and practical ways that protesters can gain political power.

“How do we make change?” one young black man asked a black officer.

By voting, the officer replied. “You have city councilmembers, a mayor –– those are the people you need to hold accountable.”

Wednesday’s protests saw the convergence of downtown and West 7th marchers who then rallied near the West 7th bridge. Later that evening, a Black Lives Matters activist who goes by the name of BLACK called for the mayor to meet the protesters outside of City Hall. 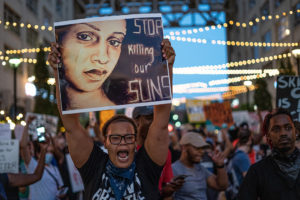 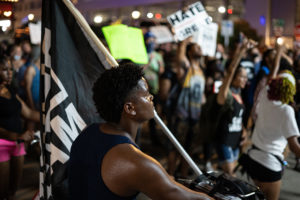 “We’ve been coming to your meetings,” he told the crowd from the steps of the courthouse. “You bring your city council meetings to us, then we will believe that you are for us.” 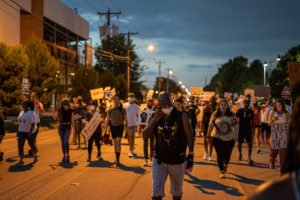 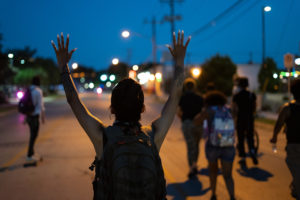 Dozens of protesters spoke at City Hall on Thursday as hundreds of protesters marched between the city council meeting and the courthouse. At a late evening rally outside City Hall, protest organizers described future plans to expand the protests to the Shops at Clearfork, the Stockyards, and other areas of Fort Worth. 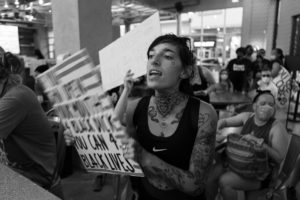 A Friday crowd of several hundred infiltrated Crockett Row with one target in mind: Your Mom’s House. Last February, a white bartender sported an Afro wig and a Colin Kaepernick jersey with the former NFL quarterback’s name on the back partially blacked out to leave only the letters “P-R-I-C-K.” On the front of his jersey hung a sign that read, “Will stand to play.” The protesters had not forgotten the gesture. After several minutes of yelling expletives at the bar staff, the crowd marched on for one final rally at Montgomery Plaza. 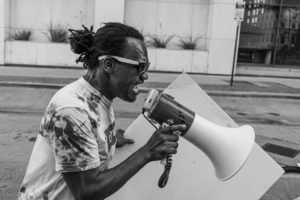 Saturday’s march returned to the West 7th corridor. This time, protesters found time to rally outside a partially boarded-up Varsity Tavern, which has been the target of repeated allegations of using dress codes to keep out black men. The bar was closed, so protesters again headed north to Montgomery Plaza for a late-night march that lasted past 10 p.m. 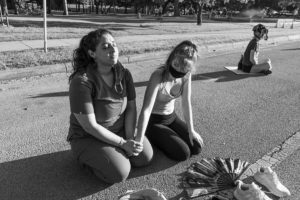 Sunday’s march was a two-hour trek into Fort Worth’s North Side. After marching north on Main Street from the county courthouse, protesters headed south along North University Drive before heading back downtown via North Henderson Drive. Back at the courthouse, protest organizers announced petitions for three goals: funds to build a mental health facility as part of a jail diversion program, the demilitarization of the Fort Worth police department, and the removal of police from Fort Worth and Crowley school districts. Protesters said they were in talks with the Crowley school district for plans to replace on-campus police. 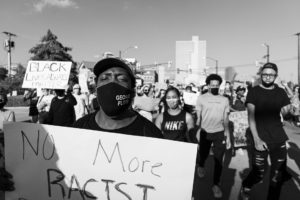 Monday protests entered the Target just north of Montgomery Plaza and two West 7th bars (The Social House and Concrete Cowboy Bar). Donnell Ballard, who leads the prominent protest movement United My Justice, said his group was not a part of that march and that United My Justice does not support the increasingly aggressive protests in the West 7th corridor.

Protesters in Fort Worth and across the United States have called for “defunding the police.” What exactly that means is unknown. Fort Worth police department’s annual budget in 2019 was $334,965,510, according to the city. The budget for police this year is $352,893,268. 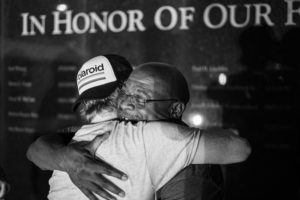 Protest organizers have told me that that city leadership will receive a list of demands in the near future. One of them has already been met. Last Monday, Fort Worth Police Chief Ed Kraus said all charges against protesters who were arrested last week have been dropped. 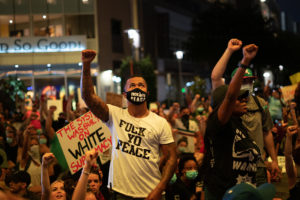 An announcement of all protest demands will “happen very soon,” said an organizer, Lucid Shinobi. “Right now, it’s one step at a time. I want the people to hear it all at once.”