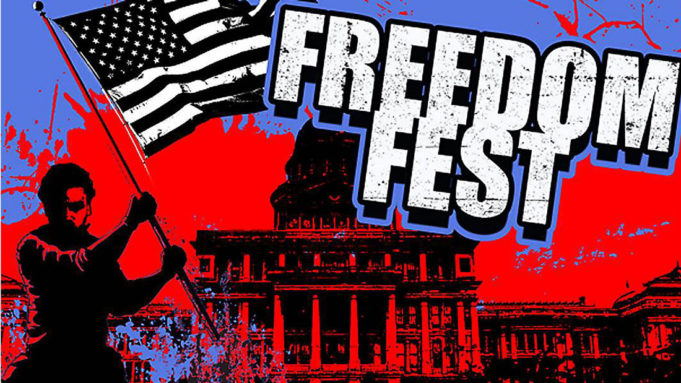 The fight is over why bar/restaurants are allowed to stay open while bar-bars, a category that includes venues, must remain closed. Though Gov. Greg Abbott appears to see himself as above the fray –– only godforsaken heathens listen to the devil’s music and imbibe the devil’s drink in public, apparently –– he may not be able to stay aloof any longer. That’s because about 100 bar/venues across the state are about to hold protest rallies at the same time, 6pm, on Saturday. Freedom Fest is the brainchild of Chris Polone, a co-owner of Rail Club Live who famously held a protest at his Westside club on July 4, appropriately, that attracted dozens of likeminded souls and that may lead to a 30-day shutdown of his venue, according to the Texas Alcoholic Beverage Commission (TABC). Since no alcohol was served and the TABC still shut down the protest, Polone decided to sue the state for violating his First Amendment rights. Proceeds from the $10 cover at Freedom Fest will go toward the charity of each bar’s choosing.

Abbott must think that all bar/venues are just dens of inequity where people swap spit all night long while rubbing blood on their bellies, incanting occultish texts in Latin, and gyrating. While true in some cases, he’s painting with a broad brush. At most bar/venues, people drink beer and talk, and in the case of places like the Rail, people drink beer, talk, and listen to music. Loud music.

Across the country, venues are joining together to seek government assistance to stay afloat. Leading the charge is the recently formed National Independent Venue Association (NIVA). Along with several of the music industry’s largest companies and organizations, NIVA recently sent a letter to Congress asking to support the RESTART Act, a new loan for businesses hit hardest by the shutdown, notably music venues. The world’s three largest music companies — Sony Music Entertainment, Universal Music Group, and Warner Music Group — signed the letter along with Spotify, Amazon Music, and YouTube. Fort Worth NIVA members include the Rail, Lola’s Saloon, MASS, Magnolia Motor Lounge, Shipping & Receiving Bar, and the forthcoming Tulips, all rock clubs. To support NIVA’s Save Our Stages campaign, visit SaveOurStages.com.

Joining the Rail locally on Saturday for Freedom Fest will be The Eight Ball Billiard & Bar (5854 Jacksboro Hwy, 817-626-8849), G. Willickers Pub (310 109th St, Arlington, 817-633-5445), and some breweries that Polone is not at liberty to name yet. None of Fort Worth’s other, popular rock venues will be participating. The 100 across the state poised to protest Saturday started out as about 300. Polone attributes the decrease to a couple of factors, especially his standard operating procedures (SOPs).

“The only way to win this fight is to be tactful and intelligent and be safe about it,” he said. “I didn’t want bar owners putting 200 people in a room for 25, and not all of [the bar owners] were onboard. If they didn’t want to abide by our SOPs, we did lose some to that. A lot of them are stuck in their ways. At the same time, we feel like we don’t feel like we lost anything. We don’t want jackasses doing this.”

Another factor contributing to the decrease, Polone believes, is that the TABC is loosening restrictions on what constitutes a 51% business, possibly allowing bar-bars and venues to serve a minimal amount of food to qualify not as 51% businesses but as restaurants or some heretofore unnamed variation thereof.

“I’m thinking by the end of the week, we’ll have over 100” participating venues, Polone said. “Heck, 10 to me was badass. We hope to make a massive impact.”

Polone has been able to generate interest in Freedom Fest by capitalizing on his fame following the Fourth of July protest. “A lot of it came organically from knowing my name after the media put it out there.”

He was since asked to speak to groups all over Texas and also asked for advice from other club owners. His initial and most accessible mode of correspondence –– Facebook videos –– has been neutered.

“Facebook hit me in the mouth a little,” Polone said, noting that the social network accused him of going against community standards by calling for large groups of people to gather, allegedly putting public health at risk. “I went from posting to 15 groups a day now down to one. That did inhibit me a little as far as getting the word out on Freedom Fest.”

Polone said his Freedom Festers are not trying to “defy” Abbott but that the governor is “literally starving out a population of people.”

In the governor’s mandates, Polone sees a stark double standard. “You can’t drink a beer at my bar, but go across the street and have a burger and drink all you want, or go to a BYOB strip club or go wait in line at Six Flags, the list goes on and on.”

Polone said that more than anything he would love to “start a dialogue” with the governor. Bar/venues, the Rail co-owner added, “pay more in taxes than any commercial business –– they’re still charging us taxes now,” which is true. “It’s literally taxation without representation, and [Abbott] won’t even talk about it.”

Freedom Fest, Polone said, is just the beginning. “This is something we’re organizing and continuing to do as more and more bars jump on as weeks go by. … We’re going to continue going bigger and louder every single time until we get some sort of bailout or we know how to proceed and open.” –– Anthony Mariani