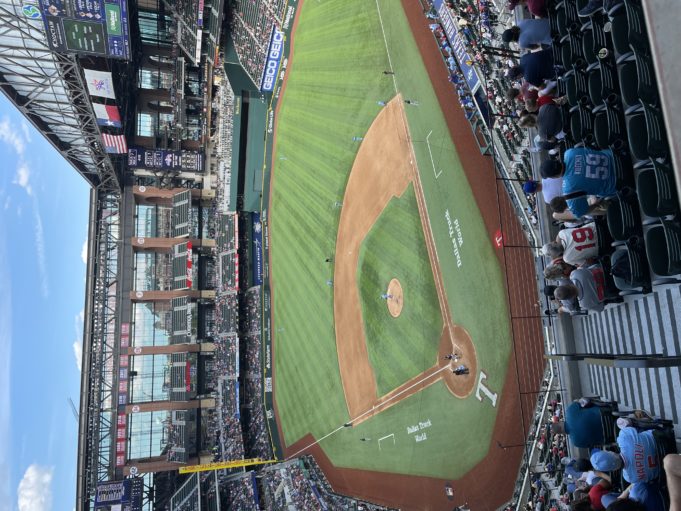 You can bring the curtain down now. The Rangers’ 2021 baseball season came to an end at 5:01 p.m., Oct. 3, when the Rangers’ Andy Ibañez flew out to Cleveland Indians right fielder Barry Zimmer for the 27th out of the 162nd game to bring a disappointing season to an end.

The 28,396 fans who witnessed the Rangers’ last game were 28,396 more than the fans who saw last year’s final game, which had zero paid attendance because of the pandemic.

While the season’s last game does not have the pageantry and pomp and circumstance that an Opening Day game has, it is still a game that many fans, like myself, look forward to attending. It’s a time to reflect on the season, especially its highlights and memorable moments. And there were plenty.

On the final game of the regular season, all games begin at 3 p.m. ET. I got to the game early. I always have mixed emotions to see a baseball season come to an end, although it has been a season that many of us would soon like to forget.

As I’m walking to the media gate I hear, “Welcome home, Rangers fans.” It is Rangers public address announcer Chuck Morgan’s recorded message that has been greeting fans all season long as they enter the ballpark.

I’m surprised to see the long lines of fans waiting for the gates to open. Despite the team’s dismal record and the Cowboys playing down the street, there were many diehard fans eager to see the season’s final game.

Then it dawned on me. This was a historic game. That’s right. It was the last time the Cleveland team played with the name “Indians” on their uniforms. After years of protests from fans and Native American groups, the team decided to change the name they’ve had since 1915 to the Guardians.

The gates opened at 12:30 p.m. for the 2:05 p.m. game, and fans were able to watch the Cowboys game, already in progress, on the stadium’s two jumbo video boards.

It was now game time, and with the outdoor temperature a comfortable 84 degrees, the 5.5-acre, 24 million-pound roof was open.

Prior to the game, there was a moment of silence in honor of John “Zonk” Lanzillo, Jr., one of the Rangers’ most loyal and longtime fans, who passed away recently at the age of 88. Zonk was well known for his drum banging behind the Rangers’ dugout at both Arlington Stadium and Globe Life Park. He would create much excitement with his trademark drum, which many times helped ignite Ranger rallies.

Members of his family, who were in attendance, presented Zonk’s drum, signed by members of the Rangers’ 1996 team that won the Western Division that year, to Morgan. The drum is now showcased in Morgan’s PA booth.

It was now game time, and the Rangers took the field for their 81st home game. Of the starting nine on Sunday, only four were in the Opening Day lineup: Isiah Kiner-Falefa, Nathaniel Lowe, Nick Solak, and Jose Treviño. The Rangers managed to get only four hits as Cleveland blanked them 6-0.

It was the 15th time the Rangers were shut out this season. Two of them were no-hitters. On April 9, San Diego Padres pitcher Joe Musgrove no-hit the Rangers. Then on May 19, New York Yankees hurler Corey Kluber, a former Ranger, no-hit his former team.

Still, fans continued to come averaging more than 26,000 per game. The home-opener sellout against Toronto on April 5 was, at the time, the largest crowd at a sporting event since the coronavirus altered events’ attendance.

The Yankees, as always, were a big draw and more so this year because it marked the return of former Ranger Roughned Odor, who was claimed by the Yankees earlier this year after the Rangers released him prior to the season.

There was a large crowd on hand June 21 as Elvis was back in the building. Elvis Andrus, the popular former Ranger who is now with the Oakland A’s, received a warm welcome by Rangers fans. “I think they still like me,” he said.

A near sellout crowd was on hand Aug. 14 as longtime Rangers public address announcer Chuck Morgan and legendary player Adrian Beltre were inducted in the Texas Rangers Hall of Fame.

The 2021 Rangers season will be remembered for its youth movement as the team used a club record 26 rookies. The Rangers led MLB with club records of 70 home runs and 804 games played by rookies.

One of those rookies was 26-year-old Adolis Garcia, who hit 31 home runs and drove in 90 runs, a club record. He also had more than a dozen outfield assists. Garcia was one of three Rangers named to the 2021 American League All-Star squad and is a strong candidate for the Rookie of the Year Award. The other two Rangers on the All-Star team this year were outfielder Joey Gallo and pitcher Kyle Gibson, who are no longer Rangers. At the trade deadline, Gallo was traded to the Yankees and Gibson was traded to the Phillies.

Watching these young players all season gives Rangers fans hope for the future. Longtime Rangers fan and season ticket holder Jeff Wood called the 2021 season “perplexing.” He said he does not know what is going to become of this, but he remains hopeful.

Others, like Spanish broadcaster Eleno Ornelas, sees the Rangers becoming a playoff team in 2023 and perhaps going to the World Series in 2024.

Meanwhile, Globe Life Field, which may be hosting an All-Star game in the near future, continues to get rave reviews from opposing players. Because the Rangers only played teams in the Western Division in last year’s shortened season, this was the first time for American League teams in the other division to visit Globe Life Field.

It has been interesting watching many of the opposing players walking into Globe Life Field for the first time with their cell phones in hand taking photos of the Rangers’ new home.

Cleveland was the last American League team to come to Globe Life Field, and pitcher Trevor Stephan was impressed with what he saw.

Following the Rangers’ last game, Manager Chris Woodward made a few comments to the media. He thanked the players and staff for their hard work.

For the time being, there are only 179 more days until the Rangers’ 2022 Opening Day, when they will host the New York Yankees and welcome Joey Gallo back to Globe Life Field.

Ozzie Garza has been writing about the Rangers for more than 20 years and is a frequent contributor to the Fort Worth Weekly.