Walk into any tiki cocktail lounge in the United States, and the drinks and decor will likely whisk you away to the shores of some far-flung island. To where exactly is another question. Hawaii? Key West? Polynesia? After several chats with Autumn Brackeen, I’ve learned that the experience of escapism is more important than any symbolic arrival.

And you could say that Tarantula Tiki Lounge has been on one helluva journey. Co-owned by Brackeen, the only bar of its kind in town opened right before the pandemic locked everything down. That the Near Southside bar not only survived but will be celebrating its one-year anniversary with a rummy bash Saturday is a testament to old adage that hard work pays off.

And being kickass. There’s no other watering hole in the fort inspired by a ’60s sitcom. The tarantula theme specifically comes from The Brady Bunch. In Season 4’s “Hawaii Bound,” Peter and Bobby stumble upon an ancient Tiki idol that sends them evil omens, including a tarantula. While that episode was set near Hawaii, Tarantula Tiki Lounge pulls influences from the Pacific Ocean and the Caribbean Sea, the ancestral home of rum.

Several members of the Tarantula Tiki Lounge team recently met me on the bar’s new back patio to chat about this past year. Were it not for a once-in-a-century global pandemic, the cocktail lounge would have officially opened in spring 2020.

“We were originally going to open March 13,” he said. The pandemic “gave us more time to get the bar ready. It was a lot of work through June to get everything ready.”

Brackeen, Steward, Kolin Jardine, and Cole Austin alternately used words like “exciting” and “stressful” to explain the mix of emotions they felt that spring and summer. Brackeen said the landlord gave them a little break on rent, but the bar co-owner still had to generate enough money to keep the business afloat. In June, the Tarantula team held a fundraiser using donated items from the Near Southside community. The Tiki-Thon helped the business scrape along, Brackeen said.

Like other businesses that had the misfortune of opening in 2020, Tarantula Tiki Lounge was not eligible for federal Paycheck Protection Program loans. Brackeen also unsuccessfully applied for financial help from the City of Fort Worth. The cocktail lounge opened for 10 days in June before Gov. Greg Abbott shut down Texas’ bars, his preferred whipping boy throughout the pandemic.

“That’s when the state let us sell cocktails to-go,” Brackeen said. “That was the one good thing to come out of the pandemic.”

Selling cocktails to-go has become a small but important income source for the lounge. Jardine said patrons have learned the joys of grabbing a frozen cocktail while strolling down South Main Street. When Tarantula Tiki Lounge fully opened in September, it wasn’t the party atmosphere that they had envisioned.

“Policing masks was a nightmare,” Austin said. “No one wants to be told what to do. For the safety of everyone around, we were trying to be consistent. There was a lot of backlash against that.”

Brackeen said her team strictly enforced capacity limits and mask-wearing. Employees were tested for COVID-19 on a weekly basis during those uncertain times.

Halloween that year was surreal, the staffers said. Both the police and TABC stopped by for inspections on a night that had an extra 13th hour due to Daylight Saving Time. When one officer asked about a fire extinguisher, a confused Jordine, thinking the cop was in a costume, replied that he “didn’t know how to mix one of those.”

Steward joked that he did get to remind the police to stay 6 feet apart. One woman who was dressed as Queen Maeve from The Boys had transformed the conflicted hero into a full-on villain with her super-rude demeanor, Steward added.

“I had blocked out so much of that” night, Brackeen said with a laugh.

Many bars were able to reopen by selling food, which allowed them to operate as a restaurant. Brackeen said she collaborated with a lot of lesser-known chefs who have since gone on to open food trucks and restaurants.

“It was fun to be able to give chefs an opportunity to try their hand at a pop-up,” she said of the turbulent time.

By March, the situation had settled to the point where Brackeen felt comfortable lifting the facemask requirement for customers and increasing the indoor capacity.

“It was all of a sudden twice as lively in here,” Steward said. “I wouldn’t want to say that it felt stiff before, but we were finally able to operate how we always wanted. It was enjoyable and exciting.”

Austin said 2021 has afforded the Tarantula Tiki team more time to focus on honing their rum-based craft. Educating patrons on what qualifies as a tiki cocktail is an ongoing job, he said. Frozen drinks with cutesy umbrellas are technically island drinks or boat drinks. Traditional tiki drinks use fresh-squeezed juice, high-end rums that are often aged, and flavorings like allspice and nutmeg. The results are light-bodied and really boozy — partly the result of the bar’s preference for higher proof rums. Tiki drinks are intended to be sipped and savored.

When Americans do drink rum, it’s often with a splash of Coke or in a sugary piña colada or mojito. Tarantula Tiki Lounge’s cocktails are rum-forward. The Bombo, for example, is a rum version of an Old Fashioned. Tarantula Tiki Lounge team member Cody Raymond said the drink, which is made with Plantation rum, cinnamon syrup, and nutmeg, is a sippable cocktail that appeals to whiskey and bourbon fans.

The Tarantula Tiki crew’s excitement was palpable. Before I could finish asking how they felt about Saturday, Jordine, in true bartender fashion, cut me off.

“I’m excited,” he said. “I am so thrilled. People are getting the kids watched. Everyone works so hard in their own ways. Raymond brought this patio to life. I have friends visiting. It means so much. A lot of people still aren’t going out [because of COVID]. People are making an evening out of this.”

Steward said his team met the challenges of opening during a pandemic and found a way to thrive, thanks in large part to the support of regulars. Austin said the bar is finally what they had wanted to open in the first place.

The format for Saturday’s party will be unusual, Brackeen said. The evening will feature two ticketed events with early seating from 6 to 9 p.m. and late seating from 9 p.m. ’til midnight. The $20 ticket includes a specialty cocktail made with Plantation rum and Lakewood Brewing beer. Attendees will receive a custom pint glass, free appetizers, and entertainment from DJ Don Hoe. (Ha!) For tickets, visit Facebook @TarantulaTikiLounge or Instagram @Tarantula_tiki.

“We want to give everyone a really special tiki experience,” Brackeen said. 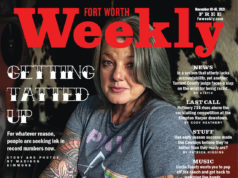