Home Film Film Reviews Fahrenheit 911
SHARE
Facebook
Twitter
Did you see Saturday Night Live’s opening sketch a few weeks ago? The one that had Al Gore winning the 2000 presidential election and leading America to universal health care, gasoline at 19 cents a gallon, an $11 trillion budget surplus, and baseball free of steroids thanks to Commissioner George W. Bush? Man, that was funny and painful in equal measure. While Dubya’s presidency becomes more of a national calamity with each passing week, the former vice president seems to have found his true calling as a private citizen and a high-powered environmental activist. 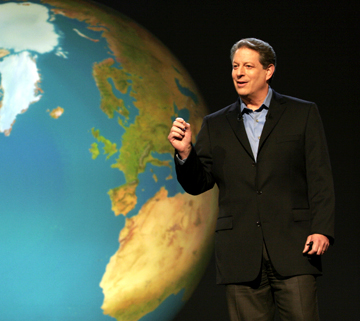 The slick and problematic documentary An Inconvenient Truth is based on the PowerPoint slide presentation that Gore has given in cities around the world and refined over the course of three decades. He lays out overwhelming evidence that global warming is a reality, if simply stepping outside isn’t proof enough for you. In this context, Gore displays all his strengths as a public speaker. Freed from the necessity of campaigning for votes, he comes across like a cool college professor — an incisive mind coupled with a way of making science understandable to the masses. He’s witty and even poetic sometimes. Noting the way the planet’s carbon dioxide levels rise and fall with the seasons, he says, “It’s as if each year, the Earth takes in a breath and lets it out.”

His relaxed, engaging manner bears disquieting news. The 10 hottest years on record all took place within the last 14 years, and evidence taken from ice core samples obtained at the poles indicates that this isn’t part of the planet’s cycle of warming and cooling. The polar ice caps are melting, which is bad because polar ice deflects the sun’s heat from the Earth. When the ice melts into ocean water, it absorbs the heat, speeding up the warming process. The film footage used to illustrate this is truly hair-raising, especially the time-lapse satellite photos of a huge section of Antarctica (known as Larsen Ice Shelf B) breaking off and melting into the ocean over three months of 2002. Gore convincingly links the rising temperatures not only to stronger hurricanes and tornadoes but also to all sorts of seemingly unrelated phenomena, from the rise of diseases such as bird flu to the genocide in Darfur, caused in part by a water shortage. His biggest ring of the alarm bell is the projection that if global warming continues unabated, sea levels worldwide will rise 20 feet within our lifetime, rendering cities from Calcutta to San Francisco uninhabitable and permanently submerging the site of the World Trade Center Memorial in Manhattan.

This last point is where he and his movie run into trouble. The National Academy of Sciences and its counterparts in Western nations are pretty much in agreement that the sea levels will be rising three feet at most in the near future (enough to cause significant problems for life on Earth, by the way). Why does Gore think those projections are too conservative? Another point that goes unmentioned: Gore was the No. 2 guy in the White House for eight years. What did he do during that time to alleviate global warming? He doesn’t say, even though he repeatedly frames his crusade in personal terms. “I took a ride in a nuclear submarine to the North Pole … I had a professor at Harvard who monitored carbon dioxide levels.” His posturing as the world’s savior reminds us that this is the same guy who once claimed to have invented the internet.

Worse, it occasionally turns the movie into an Al Gore campaign video, replete with banal reflections on his life. No doubt losing his beloved older sister to lung cancer was traumatic for him, but what does it have to do with global warming? These interludes not only disrupt the movie’s flow, they’re also icky — it feels as if Gore is mining his life’s tragedies to score points with us. Director Davis Guggenheim, whose background is mostly in network television, would have been better off sticking to the slide presentation.

Still, he does a nice job of putting the film together, and he makes it a useful starting point for debate. As dire as Gore’s assessments are, his presentation is never gloomy, and it plays to our sense that as Americans we can do whatever we set our minds to. He points out that we have tackled a global environmental crisis before, citing the hole in the ozone layer that has largely closed up because of the ban on CFCs, which was led by the United States. An Inconvenient Truth ends by setting out practical measures that ordinary citizens can use to help stop global warming. Here’s a tip: Ask the city of Fort Worth to adopt mass transit, especially light rail.

Whereas activist cinema is often too crude to spark viewers to action, Gore’s passion for his subject and, yes, his feel for working a crowd ends this real-life disaster movie on a rousing, flag-waving note. With the current administration doing what it does best (clap hands over ears, sing happy songs of denial), seeing a politician display leadership on this planetary problem is inspiring indeed.