Home News Metro Two Flat Tires
SHARE
Facebook
Twitter
In 1999, Fort Worth city staffers and the North Central Texas Council of Governments put together the Fort Worth Bicycle Blueprint, a 300-mile sprawl of bike routes intended to boost two-wheeled transportation to help improve Cowtown’s bad-and-getting-worse air quality. The plan was approved for about $160,000 in federal funding in 1999, for the first 45 miles of the routes. 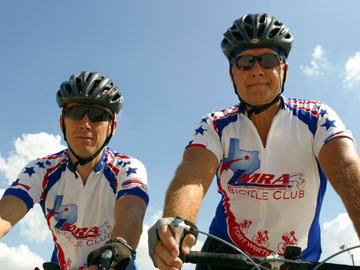 Six years later, no routes have been built and the federal money is still sitting in Texas Department of Transportation coffers, waiting for the city to do what’s needed to tap into it. For the first five years, the only forward progress was working with area cyclists to fill in details of the intended routes. And even though interest revived somewhat in 2005, local bikers say, the city still seems to be moving slowly in fulfilling the commitments it made in 1999 — including submitting incomplete plans to the state transportation agency.

Jim Wilson, president of the Lockheed Martin Recreation Association Bicycle Club, said the situation is “ridiculous” and leaves Fort Worth far behind many other cities in accommodating bike riders. “Like my grandfather used to say to me, there’s a difference between ignorance and stupidity,” he said.

When frustrated cyclists turned out to talk to the Fort Worth City Council about the problem last month, they found that council members were also largely in the dark about the six-year-old plan — even though it’s been part of the strategy the city has been officially touting to the EPA since 2003 to reduce the area’s severe air pollution problems.

Between 1999 and late 2005, city transportation manager Mark Rauscher said, “I don’t know what happened. I don’t know if it was a lack of local funds to match the federal dollars, if it got put behind other projects, or if it just got bounced from person to person.”

The “bicycle blueprint” was originally funded for 45 miles of bike routes to be designated and marked on Fort Worth streets. The routes are not the same thing as separate bike lanes, which are marked by striping at the edge of streets in some cities. Instead, the routes consist of frequent signs — four per mile — and logos spray-painted on the pavement, to let drivers know that cyclists will be sharing the space. (Although 45 miles were included originally, city staffers decided in 2004 that the money could be stretched to cover 60 miles. Now, however, they’re going back to 45 miles, Rauscher said.) The $160,000 in federal funding was to be matched by $40,000 in city money.

In 2003, the city made the bike routes a part of its air-quality improvement plan. The strategic goals document called for the bike routes to be completed by 2006. Still, the city did nothing for another two years to make that happen.

Wilson and Kyle Carr, vice president of the LMRA Bicycle Club, found out about the bike route proposal in late summer 2005, when a group of about 30 bikers were invited to a meeting of city staffers working on air-quality problems. The city official in charge of the project displayed a map of the routes and asked for opinions. However, that staffer quit in November.

To get the bike route money, the city had to submit an application to the Texas Department of Transportation, giving the details of the plan. The application was submitted in late 2005 — but, as senior city planner Rick Vasquez later told bike enthusiasts, city staff didn’t have high hopes that it would be approved.

In March of this year, bikers, fed up with the delays, started asking questions. The cyclists talked to Vasquez, who told them that the city staffer in charge of the plan had left and that he expected the state to turn down the application. TxDOT, indeed, returned the plan to the city unapproved later that month because the document lacked estimates of construction costs or timeframes.

“I don’t want to put it all on TxDOT,” Rauscher said. “If we made mistakes, then so be it, but we want to learn from it.”

Vasquez told the group that more engineering work needs to be done before the application can be resubmitted. But as of this week, that additional work hasn’t been started, he said.

By May, the cyclists were concerned enough that about 50 of them showed up at a city council meeting to jog council members’ memories about the city’s commitment. Wilson and others, including Dr. Byron de Sousa, former chair of the city planning committee, discovered that the council members knew little about the plan.

Several bikers said council members were surprised when the cyclists pushed the idea of using bikes to commute to work, rather than just for exercise and leisure.

“It seems in Texas that the bicycle is seen as a toy, and that needs to change,” Carr said.

The Bicycle Blueprint would serve those riding for recreation, commuting to work, and out to do errands. “Surely we want recreational lanes, but [bikes are] another form of transportation” that’s important, especially with gasoline at $3 a gallon, Wilson said.

Wilson and Carr said they are getting a lot of supportive response from the city council. At the meeting, council members encouraged city staffers to work with the cyclists in designing and implementing the bike routes.

At least one roadblock to the bike routes appears to have been removed. City staffers said last week that the intent was for the city engineering department to do the additional work needed before the plan could be resubmitted — but the work would have to get in a long line behind other projects. It could be months before city engineers started work on it. However, this week staffers said that they have decided to look for an outside engineering firm that can get the job done faster. The outside firm will design signs and pavement markings and decide exactly where to post and paint them along the routes.

Once the engineering work is finished and the city resubmits the plan, it could take another six months for TxDOT to approve the project. Rauscher said he expects the plans to be submitted and approved by late this year. He expects the signs and pavement markings to be in place by early 2007.

Right now cyclists have the Trinity Trail, 36 miles of leisure trails that follow the river, and a few bike racks sprinkled around close-in parts of the city. The racks — metal stars on top of short poles — were built in 1994. Because their intended use is not necessarily clear, the city recently added a logo that says “bike rack.”

As far as the remaining 255 miles of routes go, “If we finish the first 45 miles, then as far as I’m concerned, we’re done,” Vasquez said.