Home Music Music Feature Stars and Bars (and Product Endorsements)
SHARE
Facebook
Twitter
Ax-man extraordinaire “Dimebag” Darrell Abbott may be gone, but don’t think for a second that he hasn’t left behind a treasure trove of music. 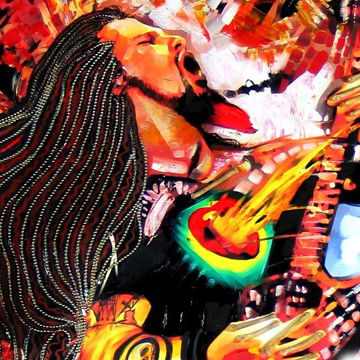 He has, and the fact has pleased more than just fans of Abbott and the two legendary metal bands he played in, Pantera and Damageplan. Abbott’s musical remains have also been a cruel salve to his brother, Pantera and Damageplan drummer Vinnie Paul Abbott. Since Darrell was fatally shot onstage in an Ohio nightclub two years ago, Vinnie has been coping not by playing full-time — yet — but by becoming actively involved in the industry as a businessman.

A few months ago, Vinnie started Big Vin Records. Distributed by giant Universal Records, the label’s inaugural full-length disc, Rebel Meets Rebel, is a hit-the-button-and-go recording that pits country rabble-rouser David Allan Coe against a bluesy and twangy but still loud and heavy version of Damageplan plus Pantera bassist Rex Brown. “Hillbilly metal” is what Vinnie calls it. Recorded months before Abbott died, the record, Vinnie said, is “the most fun I’ve ever had in the studio.

“It gave us all an opportunity to branch out and do more,” he continued. “With a metal band like Pantera or Damageplan, all the instruments act as a machine. But with RMR, we were able to create an old Rolling Stones approach and just cut loose.”

Built primarily on the groove of Pantera, the bite of Damageplan, and the eight-ball-in-the-side-pocket confidence of rebellious C&W, the record still allows for a couple of musical departures — Abbott busts out the acoustic and does some spellbinding stuff, Coe finally finds the volume switch on his microphone, and Vinnie occasionally eschews his “Hammer of the Gods” approach to tap out some nifty jazzy, bluesy interludes.

Vinnie is also responsible for the release of Dimevision: Vol. 1, That’s the Fun I Have, a collection of video recordings of life at home and on the road, all seen through the crazy but charming eyes of his brother. The DVD was recently certified gold. “There is so much stuff out there that we couldn’t get it all on one,” Vinnie said. “So let’s call this Vol.1 and see where it goes.”

Besides managing everything attached to Abbott’s name, Vinnie is doing his own thing. He’s still running The Clubhouse, an adult entertainment hang-out that also doubles as a pit stop for national metal acts coming through the Metroplex. He’s also still writing for the extreme music mag, Revolver. Readers write in with questions as various as “Dude, my girlfriend won’t put out — what should I do?” and “How’d you get into drumming?,” and Vinnie responds in his brand of no-nonsense Texas straight-talk.

While Vinnie might not be spending a lot of time behind the kit, he’s still as visible as ever. On Saturday, July 1, he’s hosting MTV’s long-running metal show, Headbangers’ Ball (check local listings for air times), and his goateed mug still appears on several drum product endorsements. On Tuesday, July 4, at The Soundstage in Fort Worth, Vinnie will be on hand for the unveiling of “Dimebag’s Raging Heart,” a painting by Southlake artist Lamberto Alvarez. The event will include performances by Highview, Shotglass, and Blackwater, with special guests This Last Antic and At the Park. Proceeds will benefit the Youth Musician Scholarship Fund.

All of which begs the question: Does Vinnie plan on performing full-time soon?

“It has to be the right situation,” he said. “But I do still have it in me. I have a passion for it, and I miss it. I love being in front of the fans and playing live.”

Vinnie has been playing, however. He’s worked with Disturbed, Anthrax, and Black Label Society, and not too long ago, he pounded out “Runnin’ With the Devil” with one-half of Van Halen, singer-guitarist Sammy Hagar and bassist Michael Anthony. “I was down in Cabo with them and played with them for a week,” he said. “It was awesome.”

Some full-time possibilities are on the table, but Vinnie is ethically proscribed from talking about them. “I have been working with different people, and I really can’t tell you who they are right because we’re in the middle of everything.”

As for his change in status from rockstar to rockstar businessman, Vinnie said, “The more and more I go along, the more I miss playing, but it’s all been part of the healing process, and time is truth. And if [the playing] I am [doing] right now becomes the real deal, then I will get back to it very soon.”

Vinnie said that Big Vin has already received more than 5,000 tapes and that he and his people have listened to them all. What the label is looking for, he said, is “originality above all.” Bands interested in submitting material are encouraged to visit www.bigvinrecords.com.