Home Eats Eats House of Common
SHARE
Facebook
Twitter
For reasons beyond the reaches of mere mortal comprehension, the Houston-based restaurant chain Hospitality USA Management Group thinks there’s some demand in our country for British food. If you’ve ever heard anyone say, “Hey, guys. I’m hungry. Let’s go get some British food!,” then you probably misunderstood or were stoned. 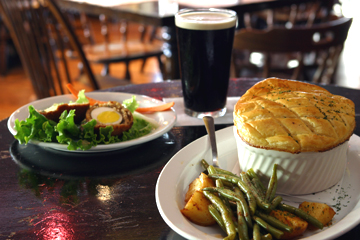 Yet since launching around the turn of the millennium, Hospitality USA now has about 20 British-themed restaurants across the country, including a new darling in the Villages of Camp Bowie.

Like its compatriots, 221B Baker Street Pub & Grill takes its moniker from the mythology of apparently closeted bon vivant Sherlock Holmes. (It’s his address. What he has to do with food or imbibing is, well, a mystery to the rest of the world.) However, the extent of the place’s Anglophilia essentially begins and ends with the legendary limey sleuth’s name — there’s only one British beer on tap (and Killian’s Irish Red doesn’t count, folks); the books on the shelves aren’t Dickens, Shakespeare, or Arthur Conan Doyle (the guy who wrote Sherlock Holmes) but children’s encyclopedias and legal volumes; and the ambient music on a couple of recent visits wasn’t even The Beatles, The Who, or Oasis but played-to-death Americanized crotch-rock crap. All that separates Baker Street from your nearest clean, comfortable non-themed bar/restaurant is a photo of young Queen Elizabeth on the wall.

Not taking Anglophilia seriously could have done wonders for the food. Too bad that even though the pub’s cooks scoff at authentic British cuisine, they manage to approximate its bland, boring spirit perfectly.

The fish and chips had undoubtedly been prepared under the false impression that this diner’s taste buds had been numbed by alcohol. Beer-battered and fried, the Icelandic cod’s exterior was soggy and flavorless. As for the “chips,” don’t expect the traditional fried potato wedges doused in vinegar and mayonnaise. Get ready for ho-hum shoestrings, Mickey-D’s-style. 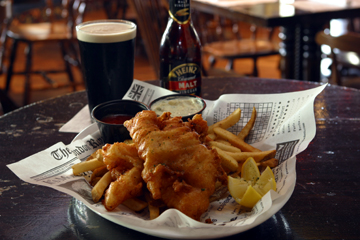 Similarly uninspired was the British sausage roll dinner. The meat (possibly mixed with breadcrumbs) had zero zing, and the puffy pastry was thin and dense. The pickle sauce and spicy mustard that accompany the appetizer version but not the entrée might have helped. Unfortunately, they weren’t offered.

On a positive note, both side dishes were excellent. The chunky mashed potatoes were fresh and buttery, and the baked beans had a succulent sweetness to them. The bleu cheese hamburger, though cooked incorrectly, was also a minor victory. Why the kitchen decided to slather the burger in mustard yet send the sausage roll out on its own was the font of several minutes of spirited conversation.

To the pub’s credit, the place was busy on every visit, and the service remained friendly, attentive, and, with one or two exceptions, accurate.

In summary, my dear reader: Even if Baker Street Pub & Grill considers food a mere respite between pints, there’s really no excuse for shirking on the Beatles tunes.