Home Arts Stage Turn of the Screw
SHARE
Facebook
Twitter
Playwright, screenwriter, and tv scribe Richard Dresser once told an interviewer, “I’ve had occasion to work at a series of jobs ranging from a plastics factory where I made G.I. Joe’s thighs … to Hollywood, where I wrote sitcoms. … These two jobs were remarkably similar. Welcome to the workplace.” 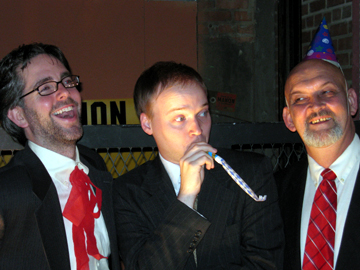 Given the recent popularity of the British and American television versions of The Office, now would seem an especially propitious time to revive Dresser’s pitch-black comedy from the early ’90’s, Below the Belt. In this work, given a sizzling and utterly on-target staging by the Fort Worth-New York troupe Amphibian Productions, the author isn’t just inconsolable about the dehumanizing consequences of corporate “teamwork” mantras that inevitably devolve into schemes and manipulation. He posits the demands of business conformity as evidence that human nature is innately despairing and lonely. And he makes a poignant and uncomfortably convincing case for this existential model.

Dresser borrowed from a lot of sources to write Below the Belt — Kafka, Pinter (the script shares some striking similarities to the recent Nobel Prize-winner’s The Hothouse), Mamet, and even Dostoyevsky’s Notes From Underground. As such, the play isn’t terribly original. Its strengths lie in its verbal dexterity, in its sheer understanding of fear as a motivating factor in professional negotiations, and in its almost confessional tone of the emotional vacuity that mars too many relationships between heterosexual men. Director David A. Miller locates all of these nuances and guides his terrific three-actor cast to pump them full of malicious comic energy. Amphibian’s show has enough laugh-out-loud moments to make you forget — at least until the performers take their bows — how damned depressing it really is.

The play is set in an unnamed rural factory compound that pumps glowing waste into the nearby river while manufacturing something that’s also never revealed. The audience focuses on one department in the factory — the “checkers,” or employees who approve or disapprove of what the company’s workers grind out. Manipulative boss Merkin (Michael Muller), hostile long-time employee Hanrahan (Evan Mueller), and earnest but too-vulnerable newcomer Dobbitt (Jonathan Fielding) will all work, sleep, and eat at the factory until an unspecified project is to be completed. The peculiar thing is, there are armed guards around the compound’s fences, leading Dobbitt to wonder out loud if the place isn’t really a prison. Hanrahan, who makes it a priority to verbally torture Dobbitt at every turn, asks him: If this place were a prison, how would it rate? Decent, he replies. And if it was a workplace? Horrible, Dobbitt declares. Then isn’t it better, Hanrahan wonders, if they all just accept it as a prison and appreciate the better conditions?

Below the Belt is packed to the gills with this kind of twisted logic, as well as a poignant need among the trio of married men, all of whom pine for their absent wives, to emotionally connect somehow — anyhow — while they go about their pointless business. Merkin the boss is particularly thin-skinned and jealous when he catches his underlings in a rare moment of laughter together. The laughing itself saddens him and leads him to wonder if Hanrahan and Dobbitt aren’t so close that they’re, well, y’know. “What?” Hanrahan demands. “Palsy-walsy,” Merkin says ominously.

Disconnection and deceit are the primary thematic engines in Below the Belt, which means it takes a particularly bright group of artists to refrain from collapsing the show into rancid misanthropy. Director Miller keeps the pace lively, and his performers all maintain a firm grasp on their characters’ personalities and machinations. Sweet-faced Jonathan Fielding as Dobbitt provides the ticketbuyers’ humane window into this potentially claustrophobic three-way cockfight, but even he proves ripe for compromise. Evan Mueller finds a way to relax Hanrahan’s choking bitterness into a last-minute hope for reconciliation with his wife. Michael Muller as the older, ultra-ambitious Merkin pretty much traded his humanity wholesale years ago at this company but manages to stir some echoes of regret for its loss.

The play’s title begs the question: Is there something about the plumbing equipment men carry “below the belt” that dooms them to cheap power plays that mask socially retarded efforts “just to feel needed by someone else,” as one character puts it? Given Dresser’s obviously jaundiced view of human motivation, it’s unlikely he’d be much more positive if this were an all-female cast. The masculine ego certainly goes in for a drubbing in Below the Belt, however — and Amphibian’s bleak-but-graceful production makes sure the experience is instructive rather than strident.