Home Music Music Feature Wrap It Up
SHARE
Facebook
Twitter
For the past nine years, we’ve been toasting the Fort Worth music scene by letting readers vote for their favorite local artists in a couple dozen categories, including Rock, Alt-Country, and Rap/R&B. To mark the occasion, not so cleverly called The Fort Worth Weekly Music Awards, we usually get some of the nominees to play a big show somewhere in town. A week or two later we invite all of the nominees, special guests, and past and present members of our Fort Worth Music Hall of Fame to a private party and announce the winners Grammys-style. 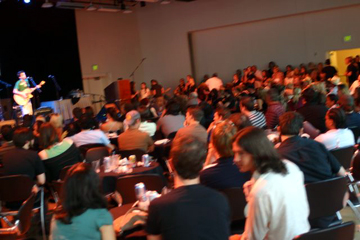 For this year’s big show, held late last month at four Sundance Square-area clubs — 8.0, Flying Saucer Draught Emporium, The Pour House, and Rick O’Sheas — we had 24 of the 100 nominated bands perform. A lot of people showed up. Last week, for the private party, nearly 200 folks crowded into Bass Performance Hall’s McDavid Studio to eat, drink, and cheer on one another. Interspersed among the individual awards presentations were performances by all seven nominees for best New Artist. I wore a suit and tie.

Around this time every year, when I sit down to chisel out my wrap-up, I tell myself I’m not going to rave. My job is simply to report the facts, I say, and I definitely don’t want to come off like either a cheerleader or Pollyanna. Yet every year I end up singing the same ol’ encouraging tune. Fort Worth is so awesome! The music here rocks! A lot of you don’t know what you’re missing! I’m not saying I want to focus on the negative, just that a more sober approach is required. If you’re reading this paper, you’re probably already aware of the non-national musical talent here and do not need me to continue haranguing you.

The party was fun. A lot of the winners seemed truly happy. The most moving acceptance speech was by hip-hopper Smooth Vega, who said that his trophy for best Rap/R&B was proof that people who forever told him he’d amount to nothing were wrong. A lot of the winners also waved the Fort Worth flag, even Taz Bentley, who earned his invitation by being a member of the Dallas-based Burden Brothers, one of several Hall of Famers on hand (class of 2004). Between handing out hardware for Rock Album of the Year and Artist of the Year, Bentley talked about all the old Fort Worth hang-outs that he and his former band, Reverend Horton Heat, used to play, especially The Hop. In a similar vein, Blues category winner James Hinkle dedicated his award to all of the local bluesmen and -women, notably late-greats Lady Pearl and Robert Ealey, who helped shape contemporary Cowtown, musically and socially.

Big D, unfortunately, did come up. During their acceptance speeches on behalf of Green River Ordinance — who won for Rock Song of the Year, Rock Album of the Year, and Artist of the Year — two mothers of guys in the band repeatedly said the boys couldn’t make the scene. Why? “They have a show in Dallas!” I’m sure I’m totally off-base, but the impression I got was that our eastern neighbor, for some folks, is still the North Texas scene’s Elysian Fields while we remain a humble, backwater village along the way.

If success for a local music event is measured by turn-out plus alcohol consumed multiplied by the number of smiling faces minus fisticuffs and/or fatalities, then both of our recent local music events were successful. However, all of the tipsy, happy, peaceful attendees threw into sharp relief the quixotic nature of the quest shared by our newspaper and the scene in general: to celebrate the “local” appellation while trying to transcend it. Basically, we want the rest of the world to hear the wonderful music in our backyard, but we don’t want the rest of the world to, y’know, steal the wonderful people making the music here. We’ve seen what happened to cities like Seattle, Murfreesboro, and, more recently, Austin. One band breaks out, scores of labels descend upon the band’s hometown to mine similar talent, the town is picked clean, everybody realizes that, well, maybe the break-out band was the only one worth a damn, and the town is left in tatters. (I can’t name one significant band or performer since Nirvana/Soundgarden/Alice in Chains to go national from the Emerald City.)

I say, let all the major record label executives, music magazine editors, and program directors continue thinking that Fort Worth is a housing project in The Bronx. What we can do here is take a page from the hippies and think globally, act locally. Since most of us agree that Cowtown is home to about three dozen should-be-on-the-radio-every-hour bands, we should do more than just buy c.d.’s or go to shows. Maybe instead of purchasing just one Calhoun album next time, buy a handful and send them to your out-of-town friends as Christmas presents. Next time you’re at the work site, commandeer the boom-box, tell the foreman to take his classic rock and shove it, and spin The Underground Railroad’s The Origin of Consciousness. Tell the owner of your local watering hole that he needs to de-crapify his jukebox a little (and you know there’s a lot of crap there) and make room for Collin Herring, Green River Ordinance, Nuwamba, Stephen Pointer, The Theater Fire, Chatterton, Bosque Brown, Goodwin, Modico, Titan Moon, The Color of May, The Burning Hotels, The High School Assembly, John Price, Sean Russell, and several other fantastic local artists whose names escape me at the moment. If he doesn’t, tell him you’re gonna take your soggy bottom, awesome jokes, and Black Am/Ex card elsewhere. (He’s a small business owner. He’ll bend.)

See. Stuff like that. Help yourself by helping your neighbor. Come to think of it: I’m not sure why any forthright Fort Worthian would pay good money for music from L.A., Music City, or New York but not for equally accomplished music written, performed, and recorded right down the street. And as a professional cultural journalist for the past 12 years, I’ve written about the local music scenes from Manhattan to Philly to Houston, and I swear on my dear mother’s eyes that I’ve never seen (or heard) a more intense concentration of talent than we have here. You can bet that when I have folks over for a cook-out, I don’t put classic rock on the hi-fi. I play local music, not out of some perverse sense of civic responsibility but from pure pleasure.

And The Winners Are …

I have to say that of all the Music Awards-related goings-on these past couple of weeks, The Blonde Girls’ drive-by performance in a downtown parking lot was the tops. Across the street from 8.0’s outdoor stage during the Awards showcase, the four Girls (they’re all guys) had parked their mini-van in a way that allowed their trunk to face the club. The drummer’s kit was set up in the back of the vehicle, and he played through the open hatchback from the front passenger seat, and the lead singer writhed all over the sidewalk in front and sang sans microphone. Out of respect for their fellow nominees — and probably the law — the Girls played only a couple of tunes and in between two of the seven 8.0 bands. I try not to be biased, but I’m glad readers voted The Blonde Girls the best band in this year’s Avant-Garde/Experimental category. A stunt like their impromptu parking lot gig is exactly the kind of subversive stuff our town needs.

I was actually pleasantly surprised by a lot of winners this year. I mean, who would have thought that Brad Hines would have beat out multiple nominees Stephen Pointer and Maren Morris in the Texas Music category? Same for John Price in Male Vocalist: I’m sure everybody thought Calhoun’s Tim Locke would have taken home the coveted panther-head trophy in a walk-off. Good thing Locke, whose band was nominated in a few categories, won songwriter of the year. Otherwise, I think I would have rioted. In fact, I’m sure I would have.

In the remaining categories, it was business as usual: Best Alt-Country went to Collin Herring, Hard Rock to The Me-Thinks, Live Band to Darth Vato, Jazz to Confusatron, Blues to James Hinkle, Cover Band to Me and My Monkey, and Rock to Black Tie Dynasty.

All I got say is that you nominees are officially on notice: The Blonde Girls are coming for you. — Anthony Mariani