Home Eats Eats Classy Comfort
SHARE
Facebook
Twitter
Remember the old days, when walking into a fancy restaurant was like wrapping an angry boa constrictor around your neck? I mean, even in the best mood and the best clothes, the most unflappable non-rich guy was bound to feel a little, y’know, hot under the collar. Some people pine for yesteryear, when the line between being rich and looking rich was miles wide. Not me, Jack: I like living in an age in which all I have to do to be treated like royalty in a nice joint is show up. (Thanks, California internet zillionaires, for making jeans, t-shirts, and flip-flops acceptable formal attire.) 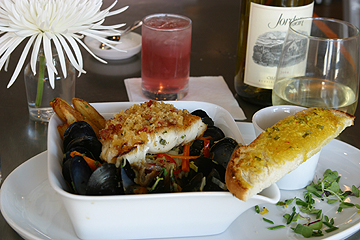 Located in the Village at Camp Bowie, the newly opened Duce is definitely fancy, but the staff, ambiance, and prices temper the vibe. Owned by celebrity chef Tim Love (Lonesome Dove), Duce strains to be welcoming. Divided almost evenly into a patio and enclosed dining area, the restaurant seems simultaneously small yet roomy, which probably has something to do with this large meteorological object called the sun. Its rays flood both the enclosed area — through giant, slightly frosted windows — and, to a larger degree, naturally, the roofless, breezy patio, maximizing each room’s size by giving shadows no place to gather. Inside, the high ceilings also bolster the illusion of space.

With a lot of blonde wood trimmed in soft, silver metal, the interior is also non-threatening. No bad art. No garish neon. No maps of the old country. Just a stylish, hanging garden of herbs and, on each table, a sprawling mum in a tiny bottle.

Duce is a good old-fashioned tapas bar. (How quaint — tapas as “old-fashioned!”) A third of the menu is devoted to half-orders and the remainder to full-size entrées.

One stand-out main course is the Uruguayan beef tenderloin. Processed without any yummy preservatives, the meat is tender and juicy but doesn’t have that bold flavor we Westerners often risk heart failure for. To compensate, Duce sends the cut out beneath a generous helping of tarragon hollandaise sauce and next to a chive potato pancake. The softly purple dressing was light, smooth, and a little fruity, and the pancake resembled a mashed twice-baked sans the skin but better, creamier, richer.

Another solid entrée, the T-bone lamb chops, came out smoky and tangy, though a little chewy. The chops were escorted by sweet potato hash, a brownish medley of sugar-cube-sized portions of spud, plus garlic, assorted herbs, and — according to the chef on the afternoon of a recent visit — “a lot of love.” Har, har.

Onward to the tapas. The halibut sausage — that’s right, halibut sausage — appeared in the form of two small, zesty, and sweet balls. Another offering, an otherwise delightful giant shrimp stuffed with smoked crawfish salad and serrano hollandaise sauce, was marred by a few crunchy splinters of shell.

Incidentally, the best tapas offering is also the house specialty. The chile piquillo gnudi (pronounced “newdy”) in sage brown butter sauce is a serving of six squishy little mouth-watering orbs of cheese and dough. The average person could eat approximately 900 of them in one sitting and not feel the least bit guilty. He’ll feel full and at peace with the world. But not guilty.

Guilt, the heavy, heartbreaking kind you get when you accidentally run over your best friend’s dog or bilk an orphanage out of 20 large, has a name, and its name is Duce’s chocolate torte. Topped with cayenne, infused with saffron, and presented on a plate a-swirl with Pollock-esque splashes of pot du crème, this agent of Satan looks tough, standing there all big and bad and squat like a melting hockey puck. Then you cleave a chunk off and scoop it into your mouth … .

You might as well start saying Hail Marys and Our Fathers before you finish.

Duce, unfortunately, doesn’t offer much for our tree-hugging, pinko commie bastard vegetarian friends — just about every entry in the menu’s “Green” section contains some form of dead animal. Still, Tim Love is a business owner, and as such, he more than likely cringes at the thought of an unhappy customer — even the vegetarian who was my guest there recently. When we explained our predicament to Forest, our appropriately named waiter, he calmly cruised into the kitchen, apparently talked to the chef, and — bada-bing, bada-boom — returned minutes later with a massive, tasty improvisation: tomatoes, asparagus, carrots, endives, brussel sprouts, and fried Swiss chard in a white wine sauce.

This may sound like a cliché, but you get the feeling that Duce staffers aren’t nice to you because they have to be. They’re nice ’cause they wanna be, no matter how unkempt and slovenly you may appear. Now, that’s fancy.