Home Music The Show The Show
SHARE
Facebook
Twitter
During their acceptance speech two weeks ago for winning best jazz artist in the Fort Worth Weekly Music Awards, the guys from Confusatron acted a little, um, confused. Of the category over which they’ve reigned these past two years (the boys won best jazz last year, too), they essentially said that, yes, their music does contain elements of jazz, especially post-bop (a.k.a. funk with horns) and fusion. But the Confusatron sound, the guys implied, also incorporates different stuff, like drum-n-bass, jam-band rock, and plain ol’ rock. 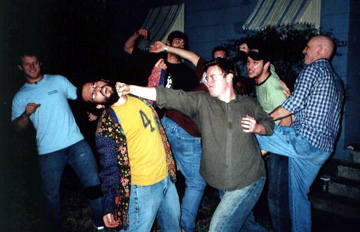 They’re right, naturally, and no one can blame them for expressing their indignation toward such a limiting label. But for the record, the Music Awards categories are by no means binding. They’re just guidelines. Nothing more, nothing less. As much as we here at the paper would like to put out an open ballot every year, we can’t — unless y’all want rock bands winning everything, and we don’t think you do.

Anyway. Best jazz artist Confusatron may not be the only band churning out the fusion-esque, instrumental rock in town, but since Bertha Coolidge, unfortunately, plays no more than about once a year, Confusatron is hands-down the best. (How ’bout this for a bad-ass bill: Confusatron, Sleeplab, and Nuwamba? BTW, if you caught R&B singer-songwriter Nuwamba’s Music Awards gig late last June, you witnessed probably the tightest, toughest funk band in the Metroplex. Sure, his backing musicians are all much older than any of the guys in Confusatron and Sleeplab, but, like all musicians, jazz and R&B players get better with age.)

Anyway. Confusatron’s holding a c.d. release party this Friday at the uniformly eclectic Wreck Room, by far the best venue around at which to bear witness to the band’s jazz/fusion/post-bop/drum-n-bass/jam-band rock/rock.