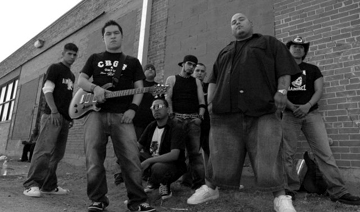 Bandleader Ramon Maldonado, who cites Linkin Park, Nine Inch Nails, and Celso Piña as influences, has been quoted in these hallowed pages as saying his group sounds like “a bunch of crazy-ass Mexicans who just robbed Guitar Center and Hot Topic for all they had.”

But there’s nothing crazy about the music here. J.C. Rios (lead guitar), Jorge Arista (rhythms), Mario Rendon (bass), and the various guests onboard are tasteful, hyper-professional craftsmen. Among the six songs, highlights include the upbeat, tongue-twisting “Candela” (candle); “Cumbia de los Muertos” (Dance of the Dead, a concept that in many Latin cultures is not macabre), and “Cumbia from Da South.” Lyrics are delivered in both English and Spanish.

Cumbia, which began as a courtship dance, has a percussion base. As the style evolved, it took on guitars, accordion, bass, and other instruments. Vallenato relies more heavily on stringed instruments, especially the guitar. Like most popular music, both were considered vulgar by modern society. (Anybody old enough to remember the early days of rock ’n’ roll?) Both cumbia and vallenato have arrived, though. Both have recently been added as official categories in the Latin Grammy Awards. Amistad mixes tradition and evolution well, respecting the past while also incorporating a bit of contemporary, sane, in-your-face humor.