Home News Metro Torture of the Powerless
SHARE
Facebook
Twitter
“People on death row have better medical treatment than these women. After all, they [the authorities] want to keep the death row inmates alive and well so that they don’t die before society has a chance to kill them. There is no such incentive for the sick women who have committed lesser crimes and are dying from neglect and indifference here at Carswell. I am here to witness for these women. I was once one of them.” 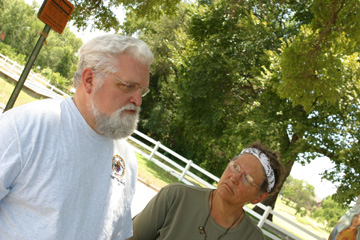 Kathleen Rumpf of Syracuse, N.Y., was explaining why she had set up camp in 100-plus-degree weather under the only shade tree on a cracked-asphalt parking lot just outside the main gate of the Naval Air Station Joint Reserve Base west of Fort Worth. It was July 27, the last day of Rumpf’s week-long fast and prayer vigil on behalf of the women of the Federal Medical Center Carswell, the only full-service hospital in the country for chronically ill or dying women who have been convicted of federal crimes.

“I have been praying for some spiritual intervention … and a thorough investigation of this place by Congress,” Rumpf said.

About a half-mile from the base entrance, the sprawling five-story Bureau of Prisons medical center towers above the joint reserve’s mostly single-story buildings like a feudal castle, its “moat” a 10-foot chain-link fence topped by razor wire.

Rumpf, 55, a Catholic and long-time peace activist and social reformer, spent nine months there in 1998 and 1999 for spray-painting “School of Shame” across the sign at the entrance to the U. S. Army’s School of the Americas at Fort Benning, Ga., the counter-insurgency training camp that turned out some of the most notorious of Central American military assassins — killers of peasants, priests, and nuns during the 1970s and ’80s uprisings in Guatemala and El Salvador.

It was Rumpf who first tipped Fort Worth Weekly to the medical abuses at Carswell, triggering the paper’s years of investigation. Her initial allegations, unfortunately, turned out to be the tip of a very dirty iceberg. Since Rumpf was there, the Weekly has substantiated hundreds of charges from prisoners, their families, lawyers, and a former Carswell doctor that a “culture of abuse” so permeates the prison that unnecessary suffering and death, rape, suicide, a possible murder, worker abuse, and official cover-ups are only a partial list of wrongdoings.

At the protest site last week, Roger Guthrie, the former Carswell doctor who was fired last year for blowing the whistle on the abuses he documented there as a staff physician, (“Taking the Cuffs Off at Carswell,” May 3, 2006), told Rumpf nothing had changed in the seven years she’s been gone.

Guthrie recounted the case of Cynthia Lyda, an inmate whom he said suffered a two-hour seizure last year that was ignored by the doctor on call because he believed she was “faking.” By the time a second doctor decided otherwise and called an ambulance, Guthrie told the Weekly in May, Lyda had suffered irreversible brain damage.

Guthrie called for an investigation by the Office of Special Counsel, the federal agency that investigates whistleblower charges of wrongdoing by other government agencies. Early last week, Guthrie said, he got a “whitewash response” from the agency. While the investigators found that Lyda had indeed suffered from a lengthy seizure, they could not substantiate deliberate neglect on the part of the Carswell doctor involved. Case closed.

Lyda’s husband, Guthrie said, has strong grounds for a lawsuit against the BOP. Lyda suffered so much brain damage from the long, unremitting seizure that she will have to be institutionalized for the rest of her life, the doctor said. “She will never be able to care for herself.” 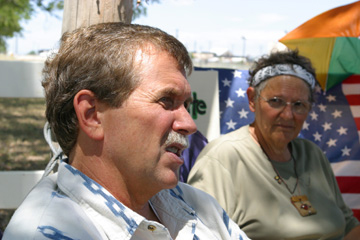 Burnam, Foley, Campion, and McCloud helped organize the Carswell Women’s Project in 1999 that attempted — unsuccessfully — to raise money for a class action suit against the BOP on behalf of the neglected women. Burnam aimed his harshest criticism at U.S. Rep. Kay Granger.

“Kay is the representative for this prison; she lobbied hard to get it located here [in 1994] when she was mayor [of Fort Worth], and now she’s AWOL in her oversight of Carswell. She has totally abdicated her responsibility to the women here. Kay has set herself up as a great advocate for women’s rights — except for the women who are dying here at Carswell,” Burnam said.

Granger’s office did not return calls asking for comment.

If such abuse were happening in any other institution — a school or a publicly supported hospital — there would be a groundswell of demand for an investigation, McCloud said. “These are our mothers, our sisters, our daughters. All we have now as evidence of their neglect are the funerals.” The religious communities here have also been derelict, he said, for “ignoring the suffering at Carswell.”

Rumpf, whose social justice work began in the slums of New York when she was in her 20s, worked for a decade in a Catholic Worker Movement shelter run by Dorothy Day. She later joined Jesuit priests Philip and Daniel Berrigan’s anti-war, anti-nuclear Plowshares group in numerous civil disobedience actions. She had been arrested and convicted many times, but until 1998, she had never spent time in a federal prison hospital.

Convicted of destruction of government property and sentenced to a year in prison in July of that year, Rumpf was transferred to Carswell three months later because of arthritic knees that impaired her walking and because she needed to be fitted for orthopedic shoes. She never got the shoes, but her foot problems paled in comparison to what was happening to the other more critically ill women there. “I was not prepared for what I found there,” she said last week. “I had experienced and witnessed abuses at regular prisons, but this was a hospital, after all. I thought I would find a caring environment for sick women, but what I found was almost medieval in its cruelty.”

A blind woman’s cane was taken away because the staff believed she was “faking her blindness.” Old women in wheelchairs were submitted to humiliating strip searches after visits from their families. Diagnoses of cancer and serious heart conditions were ignored, tests were delayed for months, and then life-saving treatments were denied. Women stood in line for hours at sick call, only to be turned away as malingerers, she said. “So many of my friends died within months of going home because their symptoms were never diagnosed or treated,” she said, “and so many were young.”

A 30-year-old “robust, vivacious” mother from Jamaica didn’t make it home. She became sick at another prison with undiagnosed problems and was sent to Carswell for tests, yet no tests were ever done. For weeks, Rumpf said, the woman complained of extreme stomach pain and begged for help but was turned away by the medical staff for faking symptoms. She lost weight, became ghost-like in her appearance, and one morning was found dead in her bed. At her memorial service, Rumpf said, one woman’s chilling shout still haunts: “Are you faking it now, Shirley?”

For another young woman, death came in the shower. “This was a military woman who had gotten an injection while still in the Army that had killed portions of her heart muscle. She needed certain meds and procedures, but the prison refused to give them, claiming they weren’t medically necessary even though they were ordered by her outside physician. I remember the screams of those who found her dead in the shower. They weren’t just the screams of women terrified at seeing their friend die, they were the screams of fear that they would be next.”

In 1986, Rumpf established a jail ministry in Syracuse, where she uncovered a horrific torture called the “Jesus Christ,” used by guards for years to punish difficult inmates: They shackled naked prisoners to the bars in the crucifixion position and left them hanging for hours, feet not touching the floor. Rumpf’s determination to stop the torture paid off when 60 Minutes investigated and exposed the illegal practice, triggering a successful lawsuit that resulted in major reforms at the Syracuse jail.

Rumpf, who counts among her friends the FBI agent who once arrested her, is a cheerful, self-deprecating woman who laughs often and plays down the many humanitarian honors she has received over the years. “There is a saying that the higher a monkey climbs, the more you see of his ass,” she joked. “And my rump has been out there a long time.”

Even though she was experienced at surviving bad prison conditions, she left Carswell with psychological scars. “I had to have therapy. I couldn’t stop crying,” she said. She carried an overwhelming guilt because of the women left behind. “I have walked the walk, and I’ve been arrested more than 100 times,” she said, but after Carswell, “I’m afraid, for the first time, afraid of being arrested again. … I know the reality now.

“Institutionalized torture of the powerless doesn’t happen in isolation,” she said. “It evolves. Abu Ghraib came right out of our culture.”