Home Eats Eats Come, Hungary
SHARE
Facebook
Twitter
he Blue Danube first entered the popular consciousness as a river that runs from Germany through Eastern Europe. Then it became a Strauss waltz that shot off into space to accompany the doomed astronauts in Stanley Kubrick’s 2001: A Space Odyssey. Now it’s come back to earth and landed in — of all places — Pantego. 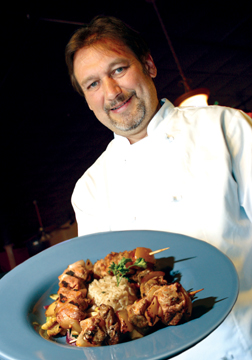 Opened about six months ago by a Slovakian immigrant chef, The Blue Danube European Restaurant and Café is a white-tablecloth affair with elegant glasses, a large bar with neon Eastern European beer signs, and a stage for live music on weekends. “Eastern European” is also a somewhat vague but apt label for the dishes and their ingredients. In addition to Slovakian offerings, the menu is loaded with Austrian, Hungarian, and Czech influences. A full-service bakery and catering company operate out of the same kitchen. Last Saturday, owner Miroslav Badonsky, who’s called Arlington home for 20 years now, was preparing to make 40 pounds of sausage for a festival at a nearby Eastern Orthodox church.

When you sit down for a meal, though, be prepared: Not all of the listed dishes are available at any given time. The chicken stock wasn’t ready yet, so no Slovak-style chicken and dumplings (made, intriguingly, with livers). Nary a fried potato dumpling on hand, either. But the sadness didn’t last long. What was served proved both hearty and subtle.

The meal started off with a plate of cevapcici (pronounced kev-ahp-chee-chee), which are hand-rolled, nugget-sized meatballs of ground pork and beef sausage. At first glance, they looked disconcertingly like that outlandishly priced nutritional dry dog food you buy in pet boutiques, but once bitten into, they were delicious — just greasy enough to savor, with a hint of sage spicing the meat flavor. They tasted just fine, in fact, even without the sweet hot mustard that accompanied them.

It sounds like a joke: How does a Slovakian make Texas-style crab cakes? (“Wearing his 10-gallon” might be the punch line.) Actually, this particular wild and-a crazy guy does crab cakes very well. His were small-ish, pastry-like patties with chunks of real, steaming hot crab flesh not lost in the breading. (We forgot to ask what, exactly, made them Texas-style, since they too had a light but prickly mixture of spices that tasted more like the Middle East than Cowtown.)

The jaeger schnitzel plate was ordered grilled, though the lean pork cutlet can also be fried. It came with spaetzle, the soft white German rice-like pasta dish that’s an easy addiction for carb lovers, and grilled carrots, zucchini, and squash. The cutlet was a pale, non-fatty porker that was a little on the tough side, but the heavenly brown mushroom gravy came to the rescue.

Sarma is a compact lump of finely ground beef with rice, wrapped in almost translucent, silky steamed cabbage leaves and covered by a thick sweetish tomato sauce. The beef had the consistency of a very dense pâté and could’ve been eaten with a spoon. It nicely symbolized the whole home-cooked, Slavic-Teutonic comfort-food approach that Blue Danube delivers as gracefully as a roomful of Rhinelanders swaying to Strauss.