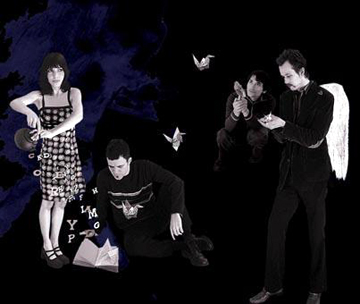 Yes, the songwriting is brilliant, and the melodies are catchy as hell, as if Duncan could do anything less. For the unwashed, that should be enough. For the skeptics and those already familiar with The Chem Set’s work, notice the stellar production quality. From the first track, “New Hope, PA,” to the last, this blue-toned gem of a disc is finely wrought.

Early in the opener, Duncan’s and Knoll’s vocals, along with Helm’s bass, sound as if they were recorded in 1978. You can practically hear the needle’s stylus grooving atop the vinyl. Then, just as the song’s tone seems destined to be yet another exercise in mining the past, the drum’s decisively over-mic’d downbeat ushers in the present, all in glorious digital clarity. The greatness of this segue isn’t its existence — we’ve heard it all before — but its subtle presentation.

Unlike so many other well-produced albums nowadays, there’s no pig requiring a heavy coat of lipstick here. The songs work, and very well, whether as guitar-and-keyboard performances, carnival-cabaret-circus-graveyard-cathedral-outer-space orchestrations, or straight-ahead rockers.

Needless to say, Duncan not only has an ear for swanky production values but a gift for marrying the sweetest of bittersweet melodies to the gloomiest of rainy-day Sunday lyrics. Imagine if Elliott Smith had collaborated with The Beatles around The White Album era.

However, in contrast to Smith’s vocals, which always seemed to succumb to the impending weight of the world, Duncan’s voice is sure and comforting, giving the effect of leading the parade instead of getting lost in it. His instrument is one of the few constants in the album.

The Chem Set borrows from a variety of 20th-century music movements. They may lean heavily on a cabaret-styled riff one minute, then swipe an entirely different color off the universal sonic palette the next. A close second to Duncan’s vox in the dependability department are the backdrops of faded, ’60s-era psychedelics, seemingly drawn from the resin of acts like The Zombies, The Byrds, The Beatles, and even a little Henry Mancini and early Tom Petty. But the imagery and arrangements are totally of the now. Dude.

Something old, something new, something borrowed, something blue — it’s all inside Duncan and The Chemistry Set’s huge bag o’ musical alchemy.