Home Film Film Reviews Sacrificing Stars
SHARE
Facebook
Twitter
The road to the remake of the 1973 pagan drama The Wicker Man was paved with good intentions, not to mention some formidable talent. Leading man Nicolas Cage also acts as an executive producer on playwright-filmmaker Neil LaBute’s rethinking of a plot that turned a standard police procedural — the search for a missing child among an island of uncooperative pre-Christian commune dwellers — into a mousetrap with a particularly nasty final spring. 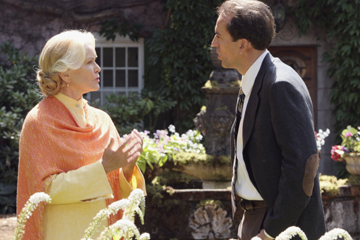 Cage and LaBute clearly had great confidence in the new movie’s major conceit, that a royal, honey-harvesting, Mother Goddess-worshiping cult of serenely dominant women would provide sufficient menace to a PG-13-targeted audience of young male viewers and spook up some big box office receipts.

And, in the appropriate hands, it should have. But the 2006 version of The Wicker Man looks and feels like precisely what it is, an overly chatty, sluggishly paced suspense flick helmed by a guy who’s accustomed to working out his vision of gender politics on either the New York stage or the more patient indie-movie screen. Neil LaBute, a devout Mormon, has drawn accusations of misogyny in his movies, such as In the Company of Men and The Shape of Things, and his recent play, Fat Pig. In fairness, while LaBute may be clueless about the workings of the female mind, he’s not so much contemptuous toward women as he is enthralled with them in a literary, awe-filled way. The recently dormant feminist critic Camille Paglia, who’s long argued for a view of femininity as innately powerful despite male social restrictions, would surely approve of the ideas behind this movie.

But like the rest of us, she might also be bored witless by the way LaBute labors through his potentially engrossing scenario. Cage plays a state highway patrolman who, during his recovery from a horrific roadside accident, is contacted by an ex-lover (Kate Beahan) desperate to find her little daughter; the girl has disappeared on a privately owned Puget Sound island called Summersisle. This is an idyll where, to paraphrase Garrison Keillor, the men are subservient and silent and the women are strong and suspicious — especially of outside interference from strange men with badges. Cage’s character is treated with great amusement by the island matriarch (Ellen Burstyn), and so the allegedly shocking plot twists are telegraphed quite early. This troubled cop is merely spinning the hamster wheels built for him by his female antagonists.

Speaking of Burstyn and the state of women artists in a Hollywood system that bows down to the (not always attractive) whims of youthful male ticketbuyers, it is simultaneously heartening and depressing to see one of the greatest actresses of the 1970s get to chew a little bit of scenery. As always, she has a totally distinctive combination of regality and earthiness (though even this doesn’t quite explain her supporting-actress Emmy nomination for a 12-second appearance that caused such a brouhaha recently).

The depressing part comes because the role also requires her to paint her face blue like a football fanatic and flutter around in diaphanous gowns among people wearing goat masks. Bravo to people like LaBute and Darren Aronofsky (who gave her a stunning showcase role in 2001’s Requiem for a Dream) for remembering our underused women greats. It’s easy to see why this role looked juicy on paper, and all actors have their share of missteps, but seventysomething actresses like Burstyn get only so many chances to see their names second- or third-billed. Maybe if we ritually sacrificed a large enough portion of the moviegoers who made David Spade and Rob Schneider millionaires, these women would see more employment.

Sadly, The Wicker Man doesn’t serve as the unnerving tonic to our current fundamentalist Christian patriarchy that it desperately wants to be. Neither is it very satisfying as camp, although when Cage shows up inexplicably in a black bear suit at the film’s climax, the audience couldn’t help but snicker. Writer-director LaBute extends some scenes too long and abruptly ends others. Several utterly illogical “shock” moments are inserted, seemingly by studio decree. LaBute appears to have been overstimulated by the potential of his provocative theme, that women rule the earth with a merciless hand despite their stereotype as nurturers. In the end, The Wicker Man offers just a straw man to the debate about the gender sources of spirituality.