Home Film Film Reviews Kutcher Coo
SHARE
Facebook
Twitter
Have we underestimated Ashton Kutcher? You can hardly blame us if we have. There are so many good reasons to hate him. His starring role in a bunch of lame movies such as Dude, Where’s My Car? and others that were almost as bad. His relationship with Demi Moore. His tv show, where his goofy shtick overpowered the much more talented Topher Grace and inspired an unconscionably long run for a rampagingly mediocre sitcom. His other tv show, where his practical jokes on fellow celebrities underscored the aura of smug self-satisfaction that always seems to emanate from him. (Impersonating Kutcher on Saturday Night Live, Justin Timberlake punctured this expertly, randomly shrieking “I’m awesome!”) 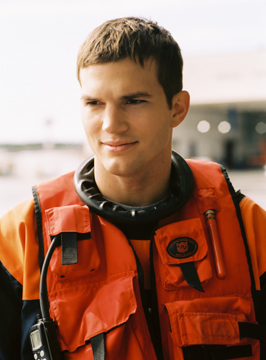 Most of all, though, we love to hate him because of his looks. Actors like Kutcher become famous because they’re pretty, as opposed to handsome. Nonthreatening, feminine-looking guys like him are just the sort of movie stars that early-adolescent girls get their first crushes on. Best-case scenario, these pretty boys have enough acting chops to maintain their leading-man status for the long run (DiCaprio). In the worst case, they become national jokes once they hit their 30s (Corey Haim). Until recently, I would have figured Kutcher for one of the latter. However, this week’s release of two movies starring him has given me the occasion to revise my opinion. Not drastically — he’s not a great actor or even a terribly interesting one. Then again, neither was Rob Lowe, and he successfully managed to fade to the middle of the pretty-boy pack by becoming aware of his limitations and picking his projects accordingly. It wouldn’t surprise me if Kutcher wound up doing something similar.

Open Season is a pretty good example of the sort of movie that makes us hate him. You’d think that he’d be easier to take when reduced to a voice in an animated film, since the format would spare us his relentless mugging. Not so. He gives voice to Elliot, an undersized mule deer who loses an antler after being hit by a truck. He meets Boog (voiced by Martin Lawrence), a bear raised by a well-meaning park ranger (voiced by Debra Messing). When the fully grown Boog is released into the wild, he needs a guide to help him survive, and Elliot volunteers for the job.

The template has been set down in too many animated movies to count — a big lovable oaf as the main character and a smaller sidekick who makes up for his lack of brawn by running his mouth nonstop. The sidekick is supposed to be annoying, but Kutcher does the job far too well, reading his lines in his familiar manic, grating comic tone. (Contrast this with Lawrence, whose voice oddly fits the laid-back bear.) The script gives him no help, devolving into a lazy finale with the forest creatures teaming up to thwart the hunters at the start of open season. Remorselessly cuddly, Open Season will only give you an overwhelming urge to see Werner Herzog’s Grizzly Man again.

Kutcher comes off much better in The Guardian, as Jake Fischer, a high-school swimming champion who has joined the U.S. Coast Guard to become a rescue swimmer and save people’s lives. Standing in his way is Ben Randall (Kevin Costner), a legendary rescue swimmer turned hard-ass instructor at “A” school. He comes down harder on Jake than on anyone else because — if you can’t guess — Jake has so much potential.

The script here is every bit as trite and boilerplate as Open Season’s, and the movie surely didn’t have to run two hours and 20 minutes. None of the dramatic developments here is the least bit surprising. Jake gets into schoolboy trouble before dealing with his massive survivor-guilt issues and learning the meaning of his job’s awesome responsibility.

So why is the movie so watchable? A lot of credit goes to director Andrew Davis, who’s experiencing a bit of a resurgence between this and the excellent kids’ movie he made a couple of years ago, Holes. Davis directs with the sharpness and intelligence that first distinguished his action movies from the late ’80s and early ’90s, such as The Fugitive. The movie’s biggest advantage is, it’s about the Coast Guard, which doesn’t receive nearly the same publicity as the other branches of the service. (As Ben eyeballs a couple of Navy guys who are coming toward him and Jake to start a bar fight, he tells the recruit, “They think they’re better than us because they’re combat-oriented. Nobody appreciates us until they really need us.”) It’s enlightening, then, to see how the Coast Guard trains and how they do what they do. And Kutcher pulls his weight, checking his comic shtick at the door and exercising the right degree of restraint. He even tears up prettily when facing the prospect of failure. In this movie, he looks something like a grown-up. It’s a start.