Home Film Film Reviews Politically Incorrect
SHARE
Facebook
Twitter
There are many things wrong with Man of the Year, but the basic premise isn’t one of them. 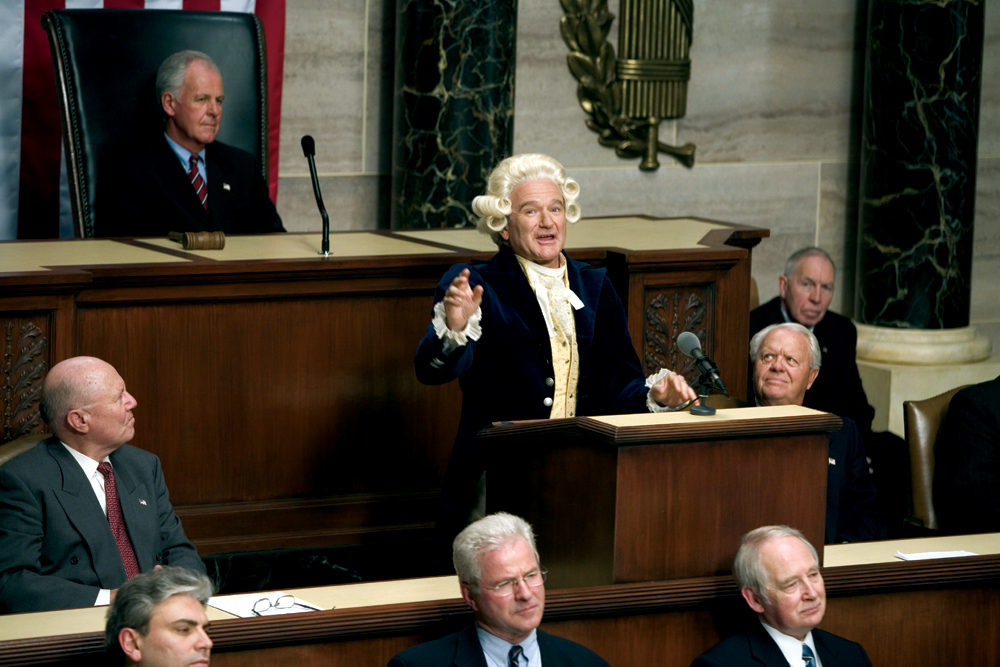 The film stars Robin Williams as Tom Dobbs, a comedian who hosts a national tv program devoted to political humor. Tom decides to run for president of the United States on a whim and winds up actually winning the race. This is just plausible enough to work as a satirical plot — look at the politically inexperienced guys who were elected governors in California and Minnesota.

When it comes to public affairs, the position of trust once held by Walter Cronkite is now held by Jon Stewart. With the world’s current crop of leaders displaying the intelligence and vision of banana slugs, would a man who can crack a witty joke about those leaders do that much worse in their shoes? Alas, the movie not only fails to answer questions like this but often skirts them entirely in favor of, well, I’m not really sure what. I am sure of this much: With political satire so plentiful in every medium, this film doesn’t cut it.

Williams isn’t the movie’s biggest problem, only its most visible one. His political gibes were fairly acute about 15 or 20 years ago, but they’ve long gone stale. The movie needed a comedian with a better handle on today’s burning issues, preferably someone from the Daily Show’s gleaming ranks — Steve Carell, Stephen Colbert, one of the Corddrys perhaps.

Still, it’s not clear that any of them could have breathed life into such an uninventive script. No doubt writer-director Barry Levinson thought he’d put the story together and let Williams fill in the laughs. The star comic delivers occasionally, but not nearly enough to compensate for the endless conversations where Tom sits around with his producer (Christopher Walken) and head gag writer-turned-speechwriter (Lewis Black) and talk politics in the tone of old guys, and not even crotchety old guys (which might have been entertaining) but more like, “Gosh, real Washingtonians listen to comedians like Bill Maher these days. Isn’t that weird?” No interesting or illuminating insights about either politics or comedy emerge from their discussions. It seems only fitting that the climactic sequence plays out at a performance of Saturday Night Live, a show whose once-sharp political humor has degenerated into tired canards.

Yet even this isn’t the movie’s biggest flaw. That would be the turn the plot takes after Dobbs wins the presidency, about 45 minutes into the film. That’s when Eleanor Green (Laura Linney), a worker at the company that produced the computerized voting machines used in the national election, discovers a glitch that caused Dobbs to be wrongly declared the winner. She tries to inform the president-elect of this, while her employers try to discredit her so they can preserve their corporation’s credibility.

This takes up the rest of the movie, no kidding. What the hell was Levinson thinking? The premise has little or no comic potential, aside from a sequence when Eleanor is poisoned with mood-altering drugs and wigs out in the company cafeteria. Sequence after sequence unfurls agonizingly as Eleanor tries to convey the information to Tom, and Tom wonders whether she can be believed. If Levinson was trying to point out our electoral process’ vulnerability to fraud or error, surely he could have done it more imaginatively, and without taking up a whole hour of screen time. The story doesn’t even play out believably on its own terms. The miscalculation behind this half of the film is so appalling, you’ll sit in genuine wonderment as the writer-director takes the movie further and further in a patently wrong direction.

Since I’m out of things to say about Man of the Year, now’s as good a time as any to write the epitaph on Barry Levinson’s career. This filmmaker loomed large over Hollywood in the late ’80s and early ’90s, but from our current perspective, his reputation is vastly overinflated compared to his actual output. Except for his unimpeachable debut film, Diner, his resumé is a long list of clunkers brightened by a few high-profile hits that owe their success not to their director but to their stars: Dustin Hoffman in Rain Man, Williams at his side-splitting prime in Good Morning, Vietnam, the ace comedy team of Hoffman and Robert De Niro in Wag the Dog. It’s true that recognizing stars’ talents and using them correctly is part of a director’s job, but just as often Levinson has stranded his stars in weepy nostalgia (Avalon), curdled fantasy (Toys), hacky thrillers (Disclosure and Sphere), faux-gritty realism (Sleepers), or increasingly tin-eared comedy (An Everlasting Piece). Even his Oscar-nominated Bugsy is a sodden, overly serious epic whose lasting legacy appears to be Warren Beatty and Annette Bening’s marriage. Man of the Year does represent a step up for Levinson from his previous film, the soul-destroyingly bad Envy. Still, it’s a sad if not unsurprising look at what a filmmaker has come to who was once the toast of Tinseltown.