Home Music The Show Norma Jean
SHARE
Facebook
Twitter
It’s not All Hallow’s Eve just yet, but Norma Jean still might frighten the bejesus outta you. First, there’s the name, that of the dead movie starlet commonly known as Marilyn Monroe, who’s arguably more famous in death than she was in life. Then, there are the musicians themselves, their eyes ringed with black mascara, their faces fixed into glowering stares, and their instruments cranked to 11 and bullied into producing crisp, semi-melodic, hardcore metal. 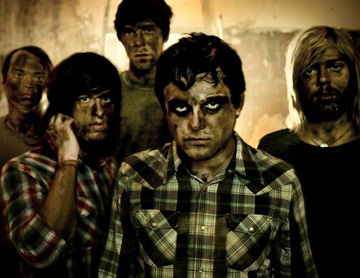 Out promoting their new album, The Redeemer, the five dudes of Norma Jean, like My Chemical Romance and Aiden, look like zombies in Gap clothing but deliver way less gloss and way more bash. What also sets Norma Jean apart from other metal-core rockers, other than not having a name associated with burial (Bury The Dead, Between the Buried and Me, Can’t Not Stop Breathing, etc.), is a predilection for progressive musicianship, with shifty time signatures, syncopated rhythms, and throaty yet understandable vocals. Tracks such as “A Temperamental Widower” and “Cemetery Like a Stage” may seem cobbled together from spare parts, à la Dr. Frankenstein’s monster, but somehow they end up flowing cohesively.

As a live band, Norma Jean ranks as a humble second-stage Ozzfest act, mainly because they put music above gimmicks and encourage moshing — legal liabilities, current fads, and death be damned.