Furniture movers were supposed to show up on a recent morning and haul off Lynda Farr Arnold’s remaining possessions, but the guys never arrived. Arnold, better known as Texas Lil, called the auction house to find out what happened. 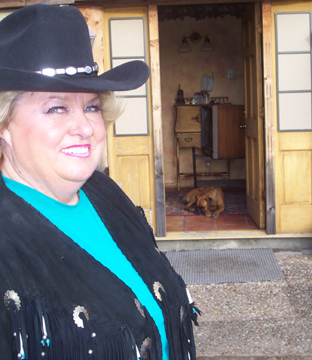 It’s a good thing she laughs at life’s setbacks, otherwise she might be in a mental ward. Or worse. At 68, an age when most people start taking it easy, Arnold is starting over. She’s bankrupt, jobless, and about to sell everything she owns — Western furniture, art, antiques, and oddball items she’s collected for decades.

“I just have to keep telling myself, ‘It’s just stuff,’” she said.

Saying is one thing. Believing is another. Moments later, the façade melted. “It breaks my heart,” she said.

Five years ago, she owned a dude ranch valued at about $8 million, hired acts like Willie Nelson and David Allan Coe, hitched up “Texas Lil’s World’s Largest Transportable Smoker” to her pickup and hauled it to promotional events around the country, and was planning her own authentic Western town. Now, she’s living in an efficiency apartment and wondering, “What next?”

Starting over won’t be easy, considering she carries the stigma of a suspected arsonist. Television news programs showed her in 2004 being led to a police car in handcuffs after Texas Lil’s Dude Ranch near Justin went up in flames so high that the glow was seen 20 miles away in Fort Worth. Her bail, on the charge of evidence tampering, was set at $100,000. The court of public opinion convicted her even though police failed to find evidence and a grand jury refused to indict her.

Arnold insisted all along she had nothing to do with the fire and nothing to gain from it. She had already lost the ranch to foreclosure, and the new owners held the insurance policy. They had offered her a job as a pitch person, a living, breathing version of Big Tex, and she was going to continue living in her house on the ranch.

Still, federal prosecutors stepped in and tried to get ranch foreman Bill Howard to roll over on Arnold and say she put him up to the arson. He refused and insisted that neither was involved. The frustrated feds couldn’t build an arson case, so they sent Howard to jail for six years on a technicality. (The night of the fire, he had grabbed Arnold’s shotgun to protect the ranch, even though a 1976 felony conviction for a youthful burglary meant Howard could no longer possess firearms.) Nobody was convicted in connection with the blaze that caused more than $2 million in damage to the dude ranch’s huge dance hall, restaurant, and office and effectively killed the business.

Arnold moved to her family ranch house in Meridian to lick her wounds and regroup, and ended up staying for two years, lying low and caring for her horses on the 300-acre spread. Then she lost that property to the bank as well.

Fort Worth Weekly has written about Arnold and the arson case several times since 2004 and always found her to be upbeat and determined. So it was surprising on Aug. 29 to receive an e-mail from her that dripped with despair. “After I lost Meridian, the hopelessness has been hard to beat off,” she wrote. “My kids paid for me an apartment in Benbrook because when I drove out the gate at Meridian I didn’t know if … I would be sleeping under a bridge or not. I need to decide what I am going to do [with] the rest of my life.”

On the phone a couple of days later, she seemed optimistic again. She was at the gym and continued her workout routine as she talked. “I got myself on a mission to shape up,” she said. “If I can’t do anything else, I’m going to get in shape.” 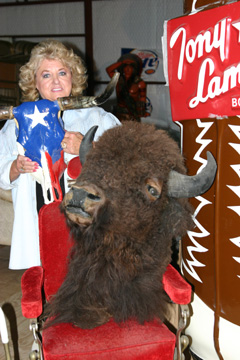 She had decided to sell off her belongings, get as much money as she could to tide her over, and start looking for promotional work and motivational speaking gigs. She had also begun writing her memoirs, touching on her childhood in Texarkana, a rocky marriage, her brother Stan Farr’s murder at the T. Cullen Davis mansion at the hands of the mysterious man in black, the ambition that allowed her to turn a small party services business into a sprawling dude ranch, and the twists of fate that left her with nothing in her golden years.

Most of her belongings and beloved memorabilia collection burned up in the ranch fire. “There was about $350,000 worth of movie posters and stuff,” she said. “I had a wall in one of those rooms that was full of John Wayne stuff that you could never replace. I had a Wall of Fame of all the people who had been out there and played out there, autographs and posters. Every room in the building had tons of stuff that had taken me years to gather up.”

After the fire, witnesses told police they had seen Arnold several days earlier moving furniture around and loading belongings into a tractor-trailer. People speculated she must have known the fire would be set. Arnold, though, said she had cleaned out a room of antiques that belonged to her mother and moved them to her son’s house nearby. That’s the stuff she is selling, along with items from the Meridian and Justin ranches.

“The house in Meridian was five bedrooms with 5,000 square feet, so I had a lot of stuff gathered up,” she said.

She once dreamed of creating a Western town, complete with a hotel, barbershop, grocery store, shops, and restaurants. To that end, she had been buying things for years and storing them wherever she could — her son’s barn, the Meridian ranch, the dude ranch. She has antique barber chairs, a pump organ, an assortment of stuffed heads and antler mounts, a wooden Indian, and numerous promotional items such as a plastic Tony Lama boot that stands about 6 feet tall. After she lost the Meridian ranch she put the items in storage, filling five mini-warehouses.

“Now I’m out of storage space and I’ve got no place to put them and I can’t keep paying for mini-warehouses,” she said.

“Everybody in Tarrant County and Dallas County knows her,” he said. “Any time you’re famous, your stuff goes for more money. I did [former Speaker of the House] Jim Wright’s estate a few years ago. It was a standing-room-only crowd.”

Arnold has been reclusive since the fire and wasn’t sure how she would be received in public. But she recently put on her “face” — wide cowboy hat, high boots, fringed jacket, bright makeup, big hair — and attended a travel conference at a swanky downtown hotel. The greeting she received from old friends and acquaintances moved her.

“Nobody had seen me for two years, and I didn’t know what response I would get,” she said. “I saw a lot of wonderful old friends who said they knew I couldn’t have done something like that [set the fire]. It felt really good to have such a great reception.”

Arnold was reminded of a Texas character who once found himself in a similar position, when Willie Nelson’s tax problems prompted the feds to auction off his belongings. The singer’s friends and fans rallied at the auction, bought his stuff, and then gave it back to him. Arnold isn’t counting on a replay of that scene.

“I don’t think I have that many people who love me,” she said.