Home Film Film Reviews Terrorist in Training
SHARE
Facebook
Twitter
Is Phillip Noyce one of the world’s most important filmmakers? Five years ago we all would have laughed at the suggestion, yet now here I am giving it serious thought. After launching his career in 1989 with the effective thriller Dead Calm, the Australian director moved to Hollywood and spent the following decade repeating the same tricks, sometimes to good effect (his two Tom Clancy adaptations, Patriot Games and Clear and Present Danger), sometimes not (Sliver, The Saint). His taste for slick visuals and muscular suspense narratives hasn’t changed, but recently he decided to grow a social conscience, and thus began an astonishing artistic rebirth, marked by a pair of films in late 2002, Rabbit-Proof Fence and The Quiet American. The latter warned about the hazards of American intervention in foreign affairs and proved exceptionally timely — it was released just as George and Dick launched their not-so-excellent adventure in Iraq. 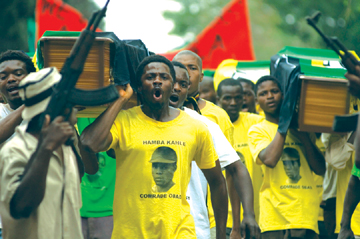 His latest movie, Catch a Fire is no less timely, even though it’s set in 1980. It’s based on the real-life story of Patrick Chamusso, a black foreman at a South African coal refinery. Resolutely apolitical, he never challenged the white minority government, preferring to channel his energy into coaching a youth soccer team and taking care of his wife and two children (as well as a third child by another woman, a secret that would later come back to haunt him). Had he been left alone, he never would have made trouble. Fate had other things in store; after African National Congress guerrillas bombed his workplace, his non-confrontational nature was of little help when police threw him in jail and tortured him on the flimsy suspicion of aiding the terrorists. The experience radicalized him, turning him into a terrorist for real. After his release, he trained with the ANC in neighboring Mozambique and hatched a plan to do even more damage to the refinery as a saboteur.

Hmmm, what lessons could we possibly take away from this? The movie’s point isn’t subtle, but since a lot of people these days have gone dense on the subject of torture, maybe subtlety isn’t the best thing. The terrorists are fighting apartheid, so we have to root for them. Yet how are they really different from the Iraqi insurgents? Or the religious fanatics of different stripes who are plotting the next 9/11? They’re all driven by the same sense of grievance, rightly or wrongly, and governments face the same problems dealing with them. As the old joke goes, “What’s the difference between a terrorist and a freedom fighter? Which side you’re on.”

The film doesn’t take the tack that torture is cruel and inhumane — its depiction of Patrick’s ordeal is tame compared with what you’ll likely see in Saw III. (Which ain’t right, but a subject for another time.) Instead, it makes a convincing case that the practice is counterproductive. Excessive force always winds up being used on innocent people, and it stirs up righteous anger that augments the misplaced anger that fueled the terrorism in the first place. When the ANC warns him about possible reprisals against his family, Patrick (played here by Derek Luke) states, “My family was punished for nothing. Let it be for something.” Who can argue with that?

As for illustrating the moral depravity that comes with torturing, it’s done in a restrained fashion by Tim Robbins’ performance as Nic Vos, a composite character standing in for the real-life policemen who tortured Chamusso. Rather than indulge in mustache-twirling, the actor insists on the character’s ordinariness. Vos uses ropes and pulleys to inflict pain not because he enjoys it or because he bears any affection for the white government, but because it’s his job. Watching him strum a guitar while picnicking with his wife and daughters, you can see this is a monster who has fully convinced himself that he’s not one. There’s the banality of evil for you.

I suspect the years won’t be as kind to this film as to Noyce’s previous two. The script by Shawn Slovo (whose father was a hero of the anti-apartheid movement — he shows up briefly as a character here) holds no surprising revelations, and Noyce’s direction is professional rather than scintillating. Still, this film strikes the right balance of consciousness-raising and entertainment, something that too few Hollywood movies manage or even attempt. In an environment where the U.S. government and increasing numbers of its citizens are more willing to countenance torture, this movie is a valuable corrective and should be required viewing for all fans of 24. The fact that we need Catch a Fire is depressing, but the fact that we have it is encouraging.