Home Music Music Feature Magic
SHARE
Facebook
Twitter
A “dove hunter,” or “Southern Unknown,” is a mythical, winged scorpion. Dove Hunter is a relatively new North Texas band. What the two have in common is a sense of the startlingly novel tempered by familiarity. 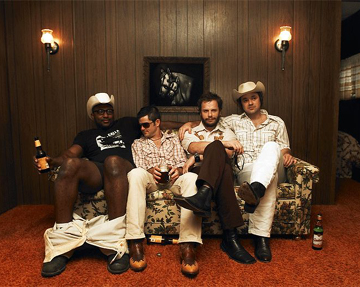 Former Doosu bassist Chad DeAtley describes Dove Hunter’s sound as “semi-dub-folk,” a mix of reggae, funk, and folk-rock. About a year ago, when he and frontman Jayson Wortham (formerly of Denton’s Mandarin) began to discuss working together, DeAtley said, “We were envisioning sounds like Led Zeppelin III and [Rolling Stones’] Sticky Fingers. But we also wanted to add a reggae vibe.”

With guitarist Josh Daugherty they started to rehearse. Wortham, a co-worker of DeAtley’s at a Dallas photography studio, offered a few sparse songs. “He told us to do what we wanted,” DeAtley said. “And we just destroyed it.”

The band soon recorded a demo, produced by Chad Wells (Mandarin, Lo-Fi Chorus) at Dallas’ Four Prong E Studios. Even though Dove Hunter has played only a handful of gigs, some of the Metroplex’s biggest, oldest bands are offering DeAtley and company slots on multi-band bills. Dove Hunter recently opened for The Burden Brothers at their c.d. release party in Dallas and will open for Baboon this weekend at The Wreck Room. Guitarist Daugherty likens Dove Hunter to “a one-night stand that never went home.”

Daugherty, a veteran of Dallas’ Pinkston, also plays with DeAtley in a prog-math-rock outfit called Future Owl. With Dove Hunter, Daugherty, an air traffic controller by day, allows the songs to dictate the instruments he chooses to play. Wortham talked him into learning the pedal steel to play in Dove Hunter — Daugherty also plays a little banjo in some parts. His approach is kind of throw-everything-against-the-wall-and-see-what-sticks. “The guys create the core of the song,” he said. “I do the extra melodies, add chaos. We’re super-melodic, which is different from what I’ve done.”

Wortham writes all of the lyrics but evades any attempt to pinpoint specific meanings in his words. “Songs happen so many ways,” he said. “Something will come to me lyrically, and I’ll write it down and have it forever. A lot of it is just ideas. I like for the interpretation to be left open.”

In addition to providing a sturdy bottom, DeAtley also throws in some keyboard washes and riffs. He’d noticed that some of his favorite songs have Rhodes organ or pedal steel in them, so he “brought in the keys for a smoother sound.” He sees his additions as complements to Wortham’s soft style. DeAtley said that “knowing theory comes into play really well when you’re trying to add stuff to a song.”

The band, DeAtley said, is focused on immediate, realistic goals, but all of the band members are shooting for more. “What we’ve done so far is an embryonic vision of what we’re going to do,” he said. “Each individual member is so different. When we hear a song, we’re all thinking something different. We are distinct people musically, but it comes together really well.”

The band plans on enlisting the help of several veteran musicians and friends in the studio. With fiddles and horns in the mix, Dove Hunter’s unique sound may keep evolving, maybe into something unrecognizable compared to today. The band also plans on adding a fifth member to enhance live performances.

“We have to choose our battles,” said Wortham, who like Holloway and DeAtley, has a family. “We don’t have time to waste.”

Daugherty said, “It has to be all about the music. … back to being 18, when you think you have the coolest song in the world.”

Adult life, DeAtley said, is “not a limitation. Having kids eliminates the stupid stuff out of my life.” As Holloway said: “There’s not a single musician I would trade places with. I love being able to make good music where I am.”

The Guitar Makes the Man