Home Film Film Reviews Windsor Knot
SHARE
Facebook
Twitter
Honestly, I can’t imagine what British people must feel watching The Queen. The movie evokes the flood tide of emotions that washed over the U.K. in 1997: the surge of hope that accompanied Tony Blair’s election, the crushing grief a few months later when Princess Diana died in a car accident, and the outrage immediately afterward as the monarchy reacted the wrong way. The English filmmakers here presumably lived through all that, and perhaps they needed a decade to come to grips with it. Regardless, they’ve taken this story and fashioned it into a neat, sparkling comedy of errors that packs a powerful sting. 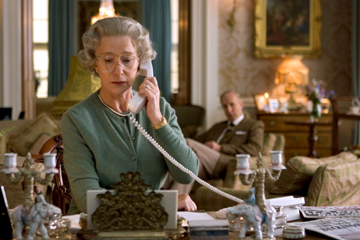 The film begins with a hilariously stilted depiction of the initial interview in May 1997 between Queen Elizabeth II (Helen Mirren) and the newly elected Blair (Michael Sheen). With the politician obviously nervous at the occasion, the queen makes him even more uncomfortable by pointing out that she once interviewed Churchill under the same circumstances and in the same chair, and wasn’t he a great man?

The bulk of the movie takes place in the seven days after Diana’s death. The royals receive the news while vacationing on their estate at Balmoral — the location is crucial, since it leaves them even more isolated than usual. The trouble starts when the queen insists there should be no public funeral. She believes in the famous British stiff upper lip and won’t give special acknowledgment to an ex-member of the royal family. Blair knows right away that this is a bad idea, but his advice continually falls on deaf ears. The royals maintain their official silence, which the public and press interpret as callous and uncaring.

It’s so fascinating to be at the epicenter of a real-life public-relations disaster. When a celebrity gets into trouble or a megacorporation implodes, you often wonder, “What were they thinking?” Movies like these try to answer that question. In this case, one flap in this crisis proves instructive, when the public’s anger coalesces around the absence of a flag flying at half-mast above Buckingham Palace. While Prince Philip (James Cromwell) and the Queen Mother (Sylvia Sims) stand on protocol and tradition, Prince Charles (Alex Jennings) understands the controversy but is too ineffectual and afraid to stand up to his mummy to make himself heard.

Director Stephen Frears lays out the story in a concise, unobtrusive, self-effacing style that nevertheless crackles with energy. He presents the missteps and machinations in a manner that’s absorbing even to people like me who have little interest in the British royal family. The film gives us this juicy tidbit: So he’ll take less of a p.r. hit than his mother, Charles has his flunkies cozy up to Blair’s government. Frears tends to be at the mercy of his material, but Peter Morgan’s deft screenplay serves him well. Every conversation holds subtexts and layers, like an uneasy one between the queen and Philip on their son’s rocky marriage. While the tv in the background plays footage of Diana discussing Charles’ infidelity, Philip says, “I thought he would have gotten rid of the other one,” typically refusing to use Camilla Parker Bowles’ name. “Or at least kept his wife in line. That’s how these things are done.” The queen then fires “Is it?” at her husband, but he misses the disapproval in her voice because he’s an insensitive wanker. At another juncture, when memories of Diana inspire Charles to maudlin self-pity (“Why do they hate us so much?”), the queen signals her impatience by turning to her black Labs and chirping, “Walkies!” Even the tiniest details ring true, like Blair relaxing at home in a replica Newcastle United soccer jersey with his own name stitched on the back. The shirt’s probably a gift from the team, but still … dorky.

Mirren’s performance is catching major Oscar buzz, and her understated work fits the character perfectly. The queen’s quiet reserve stands for the stoicism of the generation that came up during a world war, emphasizing sacrifice and duty over displays of emotion. The actress’ embodiment of this attitude is exquisitely beautiful, even as the film shows that attitude to be out of step with the times. Increasingly bewildered by her misjudgment of the national mood, the queen eventually gives in to her political instincts and does what the people want. Mirren and the movie make us feel the unattractiveness of this moment, when the public (both Britain’s and the world’s) demanded that the monarchy validate their grief rather than let them grieve in their own way.

The film ends with another interview between Blair and the queen, this time with the prime minister riding high. However, the monarch warns him that one day the public will turn on him, too, and we in 2006 know when it’ll happen. Blair’s due to learn the lesson of so many politicians, celebrities, and glitterati: When you put yourself up for public consumption, the public usually eats you. What’s different about the queen is that she never asked for her ornamental existence. That’s what makes her situation so sad, and it’s what gives this terrifically entertaining film its staying power.