Home Film Film Reviews Out of the Past
SHARE
Facebook
Twitter
Unlike painting or sculpture, movies exist in time, a fact that we’re reminded of whenever we hurry to grab a seat before the 7:20 showing starts. The medium is also uniquely equipped to play with story time and screen time to tell its tales. This week, two completely different films in genre, scope, and interests do just this. 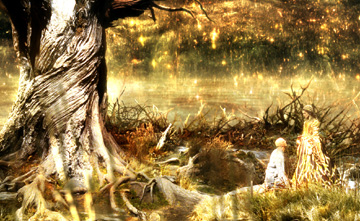 The Fountain is the first film in six years for Darren Aronofsky, who drew raves from both critics and Hollywood with his assaultive, masterful 2000 addiction drama Requiem for a Dream. This science-fiction epic was planned as his big-budget follow-up, starring Brad Pitt and Cate Blanchett. Instead, after a multitude of complications and a pullout by Pitt, it comes to us as a medium-budget film starring Hugh Jackman and Rachel Weisz, and the latter happens to be Aronofsky’s real-life fiancée. After all the trouble the filmmaker went to, it’d be great to report he came up with a masterpiece. He didn’t, but the movie is good enough to display his considerable talent.

Jackman and Weisz star in three stories set in separate places and eras. In Spain in 1500, the queen hides in exile from the Inquisition and sends a loyal conquistador to the New World to find a tree whose sap gives its drinker eternal youth. In the present day, a cancer researcher works feverishly to discover a cure for his dying wife. In the year 2500, an astronaut travels into deep space alone with the tree (encased in a large bubble), hoping to bring his wife back or to discover some other purpose for his existence.

Are we supposed to take all these characters as the same people? The script doesn’t quite finish the job of working that out, and indeed the movie as a whole does not make an overabundance of sense. The leads aren’t that impressive, either, and are upstaged without too much effort by Ellen Burstyn (a star of Requiem for a Dream) as a doctor running the cancer research project. As far as the movie’s meditation on mortality goes, Stranger Than Fiction did this much better.

Yet this film is intensely beautiful, whether it’s taking in the torchlit alcove where the queen meets her conquistador or the nebula that the bubble passes through. The story references Mayan mythology to good effect, and the director ingeniously deploys rhyming shots — the doctor whispering in his wife’s ear is referenced when the astronaut whispers to the tree, whose bark and hairlike tendrils resemble the wife’s skin and hair in close-up. The virtuosity of Aronofsky and cinematographer Matthew Libatique render this a movie you don’t make sense of so much as drink in.

While The Fountain follows its hero across centuries, Déjà Vu only follows its man for a few days. Denzel Washington plays Bureau of Alcohol, Tobacco and Firearms Agent Doug Carlin, who’s called on along with many other law enforcement agents after a terrorist bombing of a New Orleans ferry that kills hundreds of U.S. Navy servicemen and their families. He focuses on a young woman named Claire (Paula Patton), whose burned body was found near the scene a few minutes before the explosion. He comes to believe that solving her murder is the key to the whole case, and then an FBI colleague (Val Kilmer) alerts him to video and audio surveillance of her house from a few days before. Carlin realizes something’s off when he shines a laser pointer at the video image of Claire, and she turns her head to look at the light.

That’s the movie’s one genuine “Whoa” moment, and it leads to the revelation that the surveillance images Carlin’s watching are in fact a window in time that physicists have stumbled on. The physicists and video techs working on the project manage to send a handwritten note back in time, then later send Agent Carlin himself. Once you buy the absurd premise, the rest of the story holds up pretty well, which is what a great deal of good science fiction is all about.

There are potent turns from Patton (who was incandescent as the nightclub chanteuse in Idlewild earlier this year) and from Jim Caviezel as the anti-government right-wing terrorist (it’s not giving away too much to identify him), who’s scarily logical as he reveals his character’s reasoning for mass murder. Director Tony Scott makes excellent use of post-Katrina New Orleans as a location and paces his thriller well enough to erase memories of his botched Domino from last year. The time-travel element freshens up what would otherwise be a stale cop thriller. At one point, Carlin goes on a freeway chase while looking through a helmet camera showing him a car’s journey in the past. Literally keeping one eye on the past and one on the present, Denzel Washington laughs as he says, “This is trippy,” seeming to take in the sublime silliness of the whole setup. It’s easy to laugh with him.