Home News Metro The Butts Stop Here
SHARE
Facebook
Twitter
In the latest public policy battle going on in Fort Worth, it’s butts, so to speak, that are on the line. A much stricter smoking ban being considered by city leaders has riled the passions of smokers, non-smokers, and bar and restaurant owners, and it promises to leave a lot of people unhappy however it is resolved. 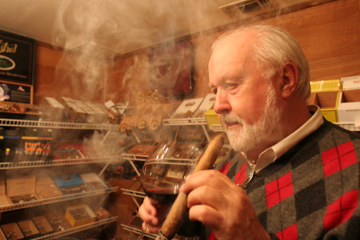 In the last several years, Texas cities from Houston to El Paso to Arlington have toughened their laws limiting smoking in public places. Earlier this month, State Sen. Rodney Ellis of Houston proposed a statewide ban on public smoking, to be considered when the legislature convenes in January. Last May, Fort Worth got on the bandwagon when the city council appointed an ad hoc committee to discuss ways to strengthen the city’s smoking law, which has been in place since 1997.

Councilman Chuck Silcox asked that the issue be revisited after receiving complaints from a number of his constituents. “Two or three dozen people asked me about stiffening up the law. I asked us to look at it to see what we could do about it,” said the long-tenured councilman. “It would be good if we could ban it, period.”

Under Fort Worth’s existing law, bars, office buildings, billiard halls, bingo parlors, and bowling centers are exempt from regulation, provided that they install the proper filtration and ventilation equipment. Restaurants can allow smoking if they have fewer than 50 seats or provide a designated smoking area with the proper ventilation system.

In October, the committee recommended that all public enclosed places be 100 percent smoke-free and proposed an additional ban on smoking within 20 feet of an entrance or operable window of any non-smoking facility. Some of the exceptions provided by the proposal include outdoor patios not within 20 feet of a main entrance, private clubs, and hotel/motel rooms.

The committee is still reviewing the ordinance, because the council asked the panel to collect more data on other cities’ ordinances and the law currently in place, according to several committee members. The council will not vote on the ordinance before January at the earliest.

The proposal was adopted by the committee on a 13-1 vote — but not before alienating a segment of the population who feel that they are being used by ladder-climbing politicians and interest groups. Some of the most outspoken critics of the ban are bar and restaurant owners who feel the government is overstepping its authority.

Some bar owners say the proposal will drive a lot of bar business completely out of Fort Worth and may force some bars here to shut their doors. But there’s not even unanimity among bar owners. Those who also sell substantial amounts of food — and some who don’t — are in favor of it.

Even though passage of some form of tightened regulation looks inevitable, council reaction also makes it seem likely that the eventual policy won’t be as tough as the committee proposed. Councilman Carter Burdette has been openly critical of the ban. Silcox acknowledges that the council is likely to compromise on the law. But he and others hope that a statewide ban will eliminate the need for the local ordinance.

Critics of the proposal, such as O.C. Drumm, owner of Smokes, Etc., a retail chain that allows smoking in its stores, believe that a ban would adversely affect the city’s restaurants and bars. “It would drive business away from Fort Worth,” said Drumm.

Nick Gregory, owner of Ye Olde Bull & Bush pub, agreed that the ban would drive consumers to other cities. “Initially I think the effect will be negative,” he said. “If we go non-smoking in Fort Worth, people will go further afield where they can sit in comfort.”

Perry Tong, owner of Pop’s Safari Cigars, Fine Wines and Bistro on the edge of the Cultural District, said, “We’ve been approached by a suburb that would like to see us move there. I would go private [if the ordinance passed], but others would move.”

MGT of America, an independent research group based in Austin, did a study on the impact of smoking ordinances in Houston and Dallas and concluded that the laws did not adversely affect sales in the restaurant sector. In fact, researchers found that restaurant sales in Dallas increased slightly after the ordinance went into effect. Those who are opposed to the ban are quick to point out that Fort Worth’s proposed ordinance is stricter than those in Houston and Dallas.

For some critics, the smoking ban has broader implications than just the loss of business. “In this age of diminishing freedom, it’s one more cog taken out of your civil rights,” said Tong. “It’s taking a legal product and criminalizing it. If you don’t want to be around smoke, don’t go to places where smoking is allowed.”

Kay Kamm, government relations director for the American Cancer Society’s Dallas chapter and a member of the Fort Worth council’s ad hoc committee, contends that smokers deny non-smokers their right to choose. “Smoking is a personal choice,” said Kamm. “There’s a significant part of the population that does not use tobacco. When a location allows smoking, it takes away the choice of the majority. The 20 or 25 percent of the people who do use tobacco are driving [other] people away.”

Kamm and others also point to the health risks associated with secondhand smoke. A study released in May by the Associated Press found that approximately 15,000 people who have never smoked a cigarette die from lung cancer each year in this country — about 9 percent of the 164,400 annual U.S. lung cancer deaths. The ban, according to Kamm, would protect both patrons and employees from such smoke.

One of the more vocal opponents of the proposed ordinance — even though he’s a member of the committee that developed it — is Jeff McKinney, general manager and vice president of City Vending Company, which leases property to 40 or so bars in Fort Worth that would be affected by the ban, especially since the company makes part of its money off the cigarette machines in those bars. He said the proposed law would not only drive customers to other cities, but would also be crippling to bars near residential areas because people going outside to smoke could cause a disturbance and create enforcement issues. “It could be devastating. We don’t know what the financial impact could possibly be,” he said. “We [City Vending] are landlords for a number of buildings that have bars. If the bar is unable to reopen because the location is protested by the homeowners’ association, I’m going to have vacant buildings all over the place, not to mention [companies] going out of business because customers are going elsewhere.”

McKinney and other opponents of the proposal also charge that the committee is disproportionately weighted in favor of those who wish to ban smoking. Each member of the city council nominated a person without input from the mayor. The public health department nominated the rest of the committee, in an effort to provide a variety of perspectives. Of the 16 committee members, only three, including McKinney, are in the bar/restaurant business, whereas four members represent organizations such as the American Cancer Society and the Fort Worth Tobacco Free Coalition. Two others from the bar/restaurant business were invited to join but were unable to participate.

Critics also point out that in 1997, Mayor Moncrief, then a member of the Texas Senate, authored a bill that banned smoking in state buildings — including legislators’ offices and the governor’s mansion. Although the mayor had nothing to do with appointing the committee, those who oppose the ban fear that Moncrief’s earlier actions mean the scale is weighted even more against them. Smokers, they figure, are the newest mistreated minority.

The other two members of the ad hoc committee who are in the restaurant/bar industry both favor the ban. Eric Tschetter, owner of the Pour House, which serves substantial amounts of food, believes that the same rules should apply to bars and restaurants. “If the city council is going to make these changes, they have to base it on public health,” said Tschetter. “It has to be across the board.”

David Rotman, owner of Café Aspen and PappaRotti’s wine bar, one of Fort Worth’s few bars that is already non-smoking except for a patio, echoes Tschetter’s assertion that the playing field should be level between bars that don’t serve food and those that do. “I know that there is some apprehension [about taking] smoking out of bars because smoking and alcohol go well together,” said Rotman. “We have an area of the restaurant that is a bar, and I wouldn’t want to lose that.”

Restaurant owners are also upset that they had to spend tens of thousands of dollars on ventilation systems to comply with the 1997 law. Both Tschetter and Rotman say that it is disappointing that they will no longer use the systems, but they chalk it up to progress.

Some owners of bars that serve little or no food figure Rotman and Tschetter are just two more strikes against them. They figure that owners of food-service bars want all bars to be subjected to the same level of regulation that they have to endure.

Not every bar owner is opposed to the ban. Matt McEntire, owner of the Shamrock Pub, believes that the proposed ban would protect people’s health. “Smoking can definitely damage your health,” said McEntire. “I think they’re looking out for the people.” He also said that if the ban were to go into effect, he is prepared to add a patio to his business.

Silcox said a statewide ban on public smoking could help mitigate the effects of a tougher policy in Fort Worth, by keeping other towns from providing a refuge for smokers. “If it’s a statewide ban, where are you going to go?” he said. “My feeling is that the council will leave bars alone. If you serve food, you won’t be able to smoke. If you go into a restaurant with kids, why should they have to suffer?”

The lunch crowd at The Montgomery Street Café in the Cultural District, a small diner that allows smoking, had a mixed reaction to the prospect of the ban. Eddie Dent, a smoker who has been coming to the café for 20 years, said that he will stop eating there if the ban goes through. “I think the government should stay out of people’s business,” he said. “People come to this place so that they can smoke.”

Steve Vanderman, a non-smoker, fully supports the ban. “I like it,” he said. “I don’t want to breathe other people’s smoke. If I wanted to breathe smoke, I’d smoke myself.”

James White shares the sentiment of a fairly good cross-section of people at the café. While he doesn’t smoke, he doesn’t mind if other people smoke around him.

“Smoking in here doesn’t bother me,” he said. But, he added, “It’s healthier without it, I know that.”

The anti-smoking movement, in addition to raising awareness concerning the health risks of smoking, has taken on big tobacco at every turn, costing them billions of dollars in lawsuit settlements and advertising dollars. Not even Joe Camel was cool enough to survive the growing anti-smoking sentiment felt nationwide. Countless cities, states, and entire countries have enacted smoking bans and restrictions. Even the black-lunged French have snubbed out their clichéd cigarettes, under the banner of public health.