Home Music The Show The Evangelicals
SHARE
Facebook
Twitter
Any band that opens an album with a minute-long instrumental prelude of squiggling, squealing synth guitar lines — and calls it “Mouthful of Skeletons” to boot — is either A) dangerously smitten with Radiohead, or B) too young to know any better. As it happens, the Norman, Okla., trio known as The Evangelicals is both. 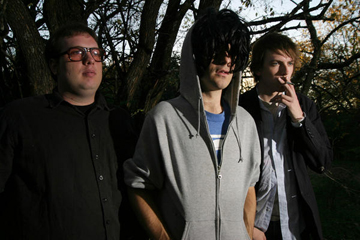 On their debut album, So Gone, twentysomethings Josh Jones, Kyle Davis, and Austin Stephens apparently don’t know that they’re supposed to be wild and wacky with their musical ambitions, not so blatantly obvious. Oingo Boingo, Danny Elfman’s springboard to film score success, pervades all 10 tracks, which isn’t necessarily a bad thing.

While still asserting a dizzying romantic streak, The Evangelicals definitely rock harder. “Another Day (and You’re Still Knocked Out)” changes time signatures at least three times but never loses its intoxicating sweetness. On “My Headache,” billowing, layered vocals float like clouds through the ballad, and Jones’ mopey falsetto inspires visions of broken-hearted grade school boys, denied their first attempt at a kiss, crying in the playground.

So Gone includes seemingly every aural effect that can be coaxed out of a four-track machine. After the 10th spin, the record will betray some quiet auditory flourishes that went unnoticed in the first nine listens. For the band’s SXSW appearance last year, they enlisted the help of several backing musicians, to help replicate the studio wizardry and also, based on the show, to introduce a zany vibe that is missing from the studio production. The album moves in so many stylistic directions that it’s impossible to predict what the band’s sophomore effort will sound like. Either way, here’s hoping they never lose their odd yet beautiful shamelessness.