Home Eats Eats Caribbean Dreamin’
SHARE
Facebook
Twitter
Bubba Bahamas is the reincarnation of Shrimpers Seafood Grille, a casual crab shack that gave nearby seafood institution J&J Oyster Bar a run for its money and sometimes, especially in the oyster and specialty salad departments, blew past it. 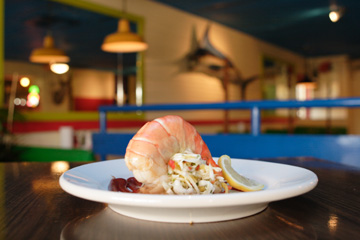 Shrimpers’, um, experienced servers were also some of the friendliest around. But the eatery never quite caught on, as either a lazy-day Saturday afternoon hang-out for twentysomethings or a happy hour stop for the blue-collar workers in the neighborhood, near the intersection of University Drive and White Settlement Road. Now under new ownership and known as Bubba Bahamas, the comfortable space still has a Caribbean theme but doesn’t serve up the hits as often.

Maybe that’s because the focus has shifted, from interesting, spicy seafood to everyday American fare. The menu reads, “A funky mixture of the South, Cowtown, and the Caribbean,” but the food’s more like “burgers and fries.”

Though it could have been bigger, cheaper, and had more cheese, the burger did its job, with fresh, moist ground chuck on a toasty bun. However, if gripped by a craving to sink your teeth into red meat on bread, you have a half-dozen better options in the area, including Fred’s Texas Café, Jack’s Off the Wall, Tommy’s Hamburger Grill, Café Modern (at the Modern Art Museum of Fort Worth), and, hell, considering the price, Jack in the Box. As for Bubba Bahamas’ fries, they came the way they should in all casual restaurants, as huge wedges, slightly crispy on the outside, and not too mushy on the inside.

The menu is also a little misleading about something else: It says the Captain’s Crab Cakes are “so fresh, they slept in the bay last night.” Well, a cute description that might be believable in Galveston makes for high expectations here, ones that, unfortunately, weren’t met. Bubba Bahamas’ puck-sized delicacies were soft and warm, and had a tasty little zing to ’em, but they definitely could have used more, well, crab. You might also be left unfulfilled after sampling the Cow Pattie Pie, a portabella mushroom stuffed with spinach and covered in melted white cheese. Think of the appetizer as a sop thrown to calorie-counters and vegetarians rather than a substitute for nachos or cheese fries or any other decadent diet-busting starter. The best chef in town couldn’t make spinach and mushrooms taste like anything but health food (so-so to the tongue, so satisfying to the soul). The good folks at Bubba Bahamas couldn’t either.

The fried catfish was a little bland, probably because the real star of the entrée was the accompanying jalapeño tartar sauce. Had the catfish been spiced, the pairing would have been way overboard. With the exception of the desert-dry grilled corn, the rest of the supporting cast held its own, most memorably the sliced purple and white, perfectly salted TCU Tater Chips, and the dense green bean casserole, with bits of mushroom and onions.

Similar to its predecessor, Bubba Bahamas is purely a white man’s version of the Caribbean. You’re more likely to hear Jimmy Buffet piping through the stereo than, say, Bob Marley. In short, Bubba Bahamas may indeed meet its ostensible mission of transporting us to warmer climes (remember them?), but shouldn’t the food taste different once we’re there?