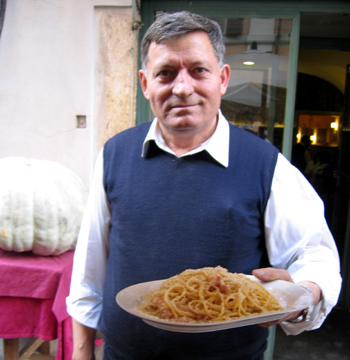 Luckily, Chow, Baby carbonara-complained to a better-informed foodie friend — and was saved from making a fool of itself in print. (Because that never happens.) In fact, Nonna’s carbonara ingredients — spaghetti, pancetta, grated pecorino Romano, egg yolk, and a sprinkling of black pepper and nothing else — are the classic Italian ones. This is according to the dusty cookbooks in Chow, Baby’s kitchen library, but there’s quite a bit of debate out in webland about what constitutes a proper carbonara. (The contributors to Wikipedia’s entry on the subject, for instance, come to virtual blows just over onions.) It’s a fairly new dish, apparently unknown before World War II, yet even the source of the name is disputed. “Carbonara” comes from the Italian word for coal, but whether the dish got its name because it was popular among charcoal workers, or because the freshly ground pepper looks like coal dust, or because the meat was originally cooked over a charcoal grill … Chow, Baby, bored already, will leave that discussion to the folk etymologists. No, Chow, Baby’s concern is with what it thought was supposed to be the main ingredient: Why did it think carbonara had to have cream? Why didn’t it know any better? It had been a while since Chow, Baby had a quest, and this was a nice fattening one.

In the six months since its first Nonna Tata sampling, Chow, Baby ramped up on Italian-restaurant visits. Curiously, not many other places around here even have carbonara on their menus, and those that do follow recipes with only one constant: a cream sauce. The meat is usually bacon, sometimes prosciutto; rarely did Chow, Baby see the supposedly traditional pancetta. Palermo’s, Sardine’s, and Margie’s Original Italian Kitchen all add mushrooms; Sardine’s also puts in onions. After Nonna Tata, Aventino’s carbonara is perhaps most “authentic”: no cream, and they finish the dish with an egg yolk, but they also add onions and parsley. As far as Chow, Baby’s research shows, nobody except Nonna Tata uses the “right” kind of grated cheese.

More confused than ever, Chow, Baby went to the horse’s mouth: Rome. No, really, it did, in November, and has the receipts to prove it to the IRS. (Nothing makes Chow, Baby happier than a tax-deductible international quest.) Over a week, Chow, Baby had carbonara at a dozen Roman restaurants near all the major tourist attractions: carbonara near the Coliseum, carbonara near the Forum, carbonara across from the Circus Maximus, carbonara outside the Vatican, and on and on. (Travel-commentary digression: The Vatican was pretty neat, even though Chow, Baby couldn’t find the fabled ATM that dispenses receipts in Latin. How geek-cool that would be: “Tuus reliquus est nullo euro,” or whatever. In St. Peter’s, Chow, Baby confessed to gluttony and not honoring its father/traveling companion, who was getting cranky about all the carbonara-sleuthing. The priest, in what must have been a bit of Vatican humor, gave Chow, Baby a penance of seven Our Fathers. Nothing for the gluttony.)

Trying to be nicer to Dad, Chow, Baby expanded its gluttony/waistline/menu to admit tiramisu and, once, pizza. This pie, from a little place on the broad Via del Corso, was a thin-crust, garlic-and-oil-sauced delight with prosciutto, arugula, and fresh mozzarella d’bufalo. (Save yourself a thousand bucks and a 12-hour flight: Gianni’s, in Watauga, makes pretty much the identical pizza.) Tiramisu, like carbonara, has a wildly debated history — this dessert of ladyfingers soaked in espresso, layered with mascarpone and custard or cream, and dusted with cocoa powder was invented either in Venice during the Renaissance, somewhere else in Italy during the first World War, or in 1971 in a restaurant in Treviso. Chow, Baby plumps for the less-glamorous theory that it’s just a way of using up leftover cake and the morning’s coffee. Supporting evidence is that each time Chow, Baby had it in Italy, it was wildly different: sometimes as dense as cheesecake, sometimes as light as whipped cream, sometimes with berries, sometimes almost nothing but custard. All good, of course.

Though the tiramisu varied by restaurant, every carbonara Chow, Baby had was pretty much the same: spaghetti, pancetta (or a similar cured-pork product that Chow, Baby couldn’t identify and its poor Italian didn’t allow it to investigate), grated pecorino or Parmigiano-Reggiano, egg yolk, and a sprinkling of black pepper. And that’s it. No cream, no onions, no nothing else. Exactly like Nonna Tata’s. (Which makes sense, as owner/chef Donatella Trotti was born, raised, and taught to cook in Italy.)

Naturally, Chow, Baby now has a new problem: This trip created a monster appetite for authentic, real, Italian spaghetti carbonara — but only one restaurant in Tarrant County makes it that way (please, please correct Chow, Baby if it’s wrong on this), and that one changes its menu each week and so doesn’t even offer it all the time. Chow, Baby has had to, yes, resort to its own kitchen (see recipe).

So the quest is completed, and like any true adventurer, Chow, Baby learned even more than lessons than it sought: Spaghetti carbonara does not properly have cream. Tiramisu can be made any which way. The pizza at Gianni’s is as Roman as Tarrant County gets. And by the way, there’s nothing in Rome resembling Burger King’s “Italian Sandwich” — grazie a Dio.