Home Film Film Reviews Happily Never After
SHARE
Facebook
Twitter
Chalk up yet another great year for Mexican filmmakers. The closely knit trio of Alfonso Cuarón, Guillermo del Toro, and Alejandro González Iñárritu all delivered acclaimed movies in 2006, though strangely enough it’s the weakest of the three (González Iñárritu’s Babel) that seems to be generating the most Oscar buzz. Del Toro’s Pan’s Labyrinth is the last of their films to reach local theaters, it’s the only one performed wholly in Spanish, and it’s probably the best. 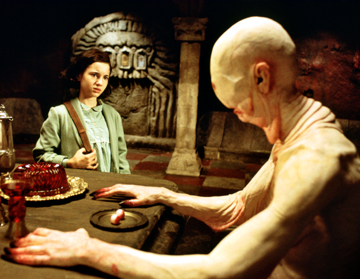 It’s certainly del Toro’s finest work. The native of Guadalajara has successfully brought a distinctive spin to Hollywood projects that would have been crap in other hands (Mimic, Blade II, Hellboy), while also putting out some odder, scruffier films in his native language (Cronos, The Devil’s Backbone). However, Pan’s Labyrinth (the title is a mistranslation — a more accurate one would be The Faun’s Labyrinth) outstrips anything he’s ever done, combining sumptuous beauty with a tragic power that makes this film an authentic crusher.

The story’s set in Spain in 1944, when Franco’s fascists have won the civil war but pockets of pro-democracy rebels are still hiding out in the countryside. That’s where 11-year-old Ofelia (Ivana Baquero) arrives with her heavily pregnant mother (Ariadna Gil) to live with her new stepfather (Sergi López), a captain in the army who’s been posted to stamp out the last of the resistance. Ofelia immediately sees that her stepdad is a monster, even though she doesn’t see him savagely beat and then execute an old farmer and his son for firing off guns in the woods. When their story that they were hunting rabbits turns out to be true, the captain simply hands the dead rabbits to his housekeeper and instructs her to cook them for dinner.

The plot sets up a domestic tragedy against a historical backdrop, but that isn’t half of what this movie is. You see, Ofelia is a voracious reader of fairy tales, and one night she’s visited by a fairy, disguised as a huge insect. (This wouldn’t be a del Toro movie if there weren’t a big-ass insect.) The fairy leads her into the topiary labyrinth outside the military compound, where she meets a gigantic faun (Doug Jones, who specializes in playing nonhuman characters, including his turn in Hellboy) who tells her in a deep, booming voice that she is a fairy princess and assigns her three tasks to complete before the full moon. Only then can she assume the throne of the fairies’ underground kingdom.

When I first saw the faun, I thought, “Chronicles of Narnia, you just got your ass handed to you.” The faun seems carved out of the same wood and stone that’s in the nearby forest, and it’s a compelling presence — ancient, courtly, oracular, menacing, and alien. Even its grammar is weird, as it addresses Ofelia in the plural form (“vosotros”). The imagination that goes into this character informs the special effects in the rest of this lush, fantastical film. The result is a visual banquet equal to any of 2006’s movies, with images that cry out to be seen on the big screen, yielding up numinous beauty as well as pure horror, such as a slimy gigantic toad that meets a truly disgusting end, and a deathly white creature with its eyeballs in its palms.

None of this, though, is as scary as López’ captain. A Spaniard who does much of his acting in French films, López has also taken a few roles in English — he was the guy illegally harvesting human organs in Dirty Pretty Things. In any language, he is one of the world’s creepiest actors, and he brings unsettling human dimension to his icily murderous character. We feel his self-loathing, his obsessions with honor and death with dignity, and his concern for his unborn son above everything else, including the lives of Ofelia and her mother. The captain’s work in suppressing the rebellion — which includes some members of his own staff — takes up as much time here as the fairy tale, and one of this movie’s great achievements is that it feels so much of a piece. The two halves could have so easily jarred with each other, and if del Toro had struck a single false note, the entire movie might well have collapsed. Incredibly, he doesn’t.

Instead, he stokes this movie into a fever pitch, Ofelia’s imaginings growing wilder as her reality grows bleaker. The uncompromising del Toro never deceives us into thinking that the girl’s belief in fairy tales will make everything OK. Yet it’s the untamable and disquieting beauty of her fantasies — not to mention Baquero’s delicate, courageous performance — that makes her fate so heartbreaking. For those who find the overwhelming darkness of the movie’s ending too much to bear, the fairy tale kicks in and offers a grand final vision of the world made pure and whole and good again. Then the vision fades, and we’re left with Ofelia and her country facing a cold, black abyss. Pan’s Labyrinth is one of the saddest movies I’ve ever seen. It’s magnificent.