Home News Metro A Move at the Mercado
SHARE
Facebook
Twitter
The beautiful but long-dormant Fort Worth Mercado finally got its first tenant — more than four years after speakers at the groundbreaking ceremony gushed over its potential for sparking Northside redevelopment. 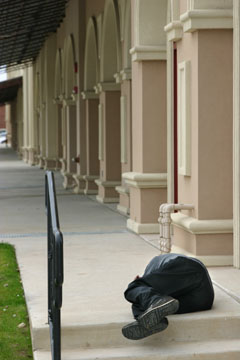 Nobody said urban renewal was easy. “Hopefully it will create a domino effect,” Fort Worth Hispanic Chamber of Commerce president Rosa Navejar said of H&R Block’s decision to lease permanent space in the controversial building. A recent visit revealed that old habits are hard to break. A wino was sound asleep on the sidewalk even though the tax preparer’s office was open for business. The Mercado was built on a large and seldom-used city-owned parking lot in the 1500 block of North Main Street. The neighborhood for years had been home to blue-collar businesses, bars, restaurants, and transients, and in the late 1990s and early 2000s the city tried to spur renewal by offering low-interest loans and a building site to anyone willing to take a risk. Few were. After a host of problems and wasted taxpayer money, the city ended up owning the albatross for a year before finally selling it at a big loss in 2006.

H&R Block has settled in at the north end of the ground floor of the three-story building just in time for tax season. Acquiring a first tenant is cause for celebration, but the tax company’s 1,200-square-foot office space barely makes a dent in the 58,000-square-foot building and does little to remove the stigma that the Mercado has been, at least so far, a towering disappointment. Don’t tell that to the new owner, Jose Legaspi, who has high hopes that the building will attract its first “professional user” in the coming months — apparently a health provider of some sort, although he declined to provide details until negotiations are complete. “We do have a couple of different restaurants — actually three restaurants — that are looking at the site and to take over the space that is designed for a restaurant,” he said. “Some are doing studies, some have given us an offer, and we are looking at what kind of possibilities we can create there.”

Enticing Northside business owners to the Mercado has been a chore. The city’s original intent was to provide local merchants with attractive space, fill some gaps in the neglected portion of North Main, and provide a stronger tie between downtown and the Stockyards. However, business owners stayed away in droves from the low-interest loans being offered. That led the city to make a questionable deal with Deyla Guadiana, who owned other nearby properties. She secured almost $4 million in loans from HUD and the Fort Worth Economic Development Corp. and spent it all before the building was close to being finished. Unable to come up with her own financing to complete the project, she walked away from a deal that allowed her an easy exit.

The city took back the property and spent more money to finish the work. Finding a buyer turned into a drawn-out process, and by the time Legaspi came courting, he was able to negotiate a cherry deal — a $5 million-plus building bought for half the price. Taxpayers got hosed, although city officials vow that the Mercado’s property and sales taxes will eventually offset the loss. Legaspi spent part of 2006 talking to community groups and stakeholders to attract Northside businesses. Entrepreneurs showed interest, but the expenses and risk involved in moving into a new, unfinished, and unproven building scared some of them away. A couple of banks considered leasing space until it became clear that the site’s layout wouldn’t accommodate a drive-through window. Legaspi aligned himself with organizations such as the Fort Worth Hispanic Chamber of Commerce to get the word out to merchants about leases and loans, but had trouble sealing deals. “Part of our effort is to bring a first-class asset into an urban setting,” he said. “We’re having to go through an educational process.”

H&R Block district manager Linda Murphy said she was delighted to open an office there and to make inroads into the thriving Hispanic market. Another H&R Block office farther north on Main Street has been booming, and “we wanted to win over the Latino community in this area,” she said. She loves the building’s large windows and natural light and the storefront location that looks out on Main. And, like city officials, she predicts the Mercado will prompt renewal and create a destination point between downtown and the Stockyards. “This could be really advantageous for the city,” she said. “I wish more retail people would look at this.” The third-floor meeting room has been attracting groups almost every weekend for quinceañeras, weddings, and other functions. Otherwise, the Mercado has been a ghost town. Part of the problem is that the building, while attractive on the outside, still needs interior finish work. Finding tenants means finding someone willing to take on renovations.

Legaspi said he paid cash for the building and is not under financial stress due to a lack of renters, but the time has come to attract tenants, regardless of whether they have Northside ties. “As we … were seeing a delay in decisions by the local community merchants, we began to look for other local prospects, and that’s how H&R Block came up,” he said. In the meantime, areas around the Mercado have made slow but definite progress. The 1400 block of Main, which includes the Rose Marine Theater, Los Alamos Café, and an assortment of small businesses, is looking better than it has in decades. A law firm recently constructed a new building, the city has made improvements to streets and sidewalks, a quarter-million-dollar vaquero statue is slated for the area, and a group of business owners have begun discussing other possible improvements. The Mercado surely had something to do with the renewed interest, even while it has struggled to find its own tenants. “I hope that [the Mercado] will be filled up completely in the next year and a half to two years, max,” Navejar said. “That’s not always feasible to have 100 percent, but to at least have it at 85 to 90 percent capacity. Once people see that there are tenants in there, they will start coming out to look at the opportunities that are available in this market.”

This isn’t the first large-scale project attempted by Legaspi in Fort Worth. He invested millions and did wonders with the old Town Center shopping mall, now called La Gran Plaza. Legaspi and his investment group are patient and confident that the Mercado will thrive despite its rocky beginning. “We’ve been doing this for 30 years,” he said. “We expect a cycle like this, especially with an unproven asset. Like any asset, it goes through a life cycle, and [it hasn’t had] an opportunity to start yet. It takes time. We’re happy with it. There is always a time limit, but we are not yet there by far.”