Question: What does a 1,200-foot-wide superhighway have to do with putting radio chips in pigs’ ears?

Answer: In the minds of the Texas farmers and ranchers who are gearing up to oppose them in Austin this week, they both spell Big Brother, comin’ down on the farm.

In the bizarro world of post-millennial America, where both the Texas governor and the country’s president seem apt to make up their own laws and powers as they go along, using constitutions only as a rough guide, maybe it’s not surprising that the federal government is pushing to register every farm and farm animal in the country and make the livestock traceable by radio frequency. (The proposed foreign-leased, superhighway/toll road complex known as the Trans-Texas Corridor, on the other hand, is older news, hailed by Gov. Rick Perry and hated by farmers and ranchers for, among other things, its taking of roughly a million acres of agricultural land.)

The two proposals together have inspired a group called the Farm and Ranch Freedom Alliance to plan what they say will be a major protest in Austin on Friday, March 2. Organizers are hoping for a major turnout of a quarter-million people or more (plus animals).

Alliance attorney Judith McGeary of Austin said the group and its allies are planning a “Don’t Tag Texas” rally that will feature a menagerie of farm animals parading down Congress Avenue to the capitol, shoulder to hindquarter with human protesters flanked by tractors. (Pitchforks, however, are verboten.) Not a Million Hoof March, maybe, but at least a thousand moo/cluck/neigh/baa brigade. “The profits of private corporations are being placed above true public issues,” McGeary said. “This is a reminder that rural Texas is out there, and it’s important.”

Perhaps Texas farmers are confused, thinking of another Bush administration initiative aimed at registering humankind? The Real ID Act, passed by Congress with little debate a couple of years ago, is supposed to create a national ID card system in this country for the first time. If the legislation goes into effect, the federal card will be required for anyone who, say, wants to board a plane or open a bank account. That law has drawn even more opposition, from the American Civil Liberties Union on through the legislative bodies in 20 or more states.

No, the one at issue here, dubbed the National Animal Identification System (NAIS), is for the furred and feathered only, and not all farmers are against it. It is intended to help track food animals in case of problems like mad cow disease or bird flu, and many believe that it — like the Trans-Texas Corridor — is just another necessary part of globalization.

Under the U.S. Department of Agriculture’s NAIS plan, farmers are urged to register their premises with the national government and provide detailed information on their animals. The livestock are identified with a 15-digit number and physically tagged with a Radio Frequency Identification Device (RFID).

The national program is still voluntary, but several states have adopted parts of the system as mandatory. Texas has already passed the necessary legislation and reserves the right to make the program mandatory at any time, but has delayed enforcement thus far, cowing to mounting opposition. The USDA is also helping fund the states’ mandatory programs — and has said it wants all farms in the country registered by 2009.

Critics see the program and the surveillance it makes possible as the stuff of Orwell novels. “We’re dealing with a program that is putting government into people’s lives in a way that we’ve never seen before,” McGeary said. “The program is very expensive, very burdensome in terms of time, and there are no significant health benefits. A massive tracking system is not where you put your resources if you’re worried about animal health.” She also pointed out that there are effective tracking mechanisms already in place, as listed on her group’s web site.

East Texas farmer Hank Gilbert, who ran on the Democratic ticket for agriculture commissioner last year, said the tag program, like the TTC, will help foreign investors while hurting farm communities. “The microchip [system], in a roundabout way, is about extending the global market for U.S. beef,” he said. He and other opponents are upset that even those farmers who do not produce for export may be forced to implement the chip, further raising their costs.

Robert Hutchins of Rehoboth Ranch, northeast of Dallas, plans to be at the protest. He believes that the tags are unnecessary and too costly. “It really won’t accomplish what they’re promising it will accomplish, so any cost associated with it is needless,” he said. “We have thousands of animals, and it’s inconceivable that the government could think that they can keep track of such a database with any degree of accuracy.”

USDA Undersecretary Bruce Knight said that the purpose of tagging is to provide a more modern method of responding to outbreaks of contagious diseases in farm animals. “What they [farmers] don’t have is something to bring the location of the farm and the animal together quickly,” he said. “The more quickly we can do that, the quicker we can contain diseases and limit the economic loss and loss of animal life.”

The idea of making cows and chickens into radio-controlled devices traceable by, say, Homeland Security, may seem like a bad Hee-Haw skit, but livestock owners aren’t laughing. Some of them say the cost of the tags ($1 to $1.50 per animal, plus “activation” charges) and the accompanying bureaucracy will drive up the price of food and destroy farmers’ privacy (since their homes are supposed to be registered as well as their animals). The annual price tag of the program is $30 million to $35 million.

But others see the program as inevitable, because of the problems with disease outbreaks and the realities of selling meat and animal products in a worldwide market.

Gene Hall of the Texas Farm Bureau, which has long represented farmers and ranchers’ interests, said it’s really the market that is herding the industry toward a tracking system. “It’s important to start addressing what the market requires with a voluntary program,” he said.

Hall said that Wisconsin, Indiana, and Michigan, have made parts of the program mandatory, as have many European countries. He believes Texas farmers actually want such a system — but only if it is privately controlled. “We want the data in private hands, not the hand of the government,” he said.

Missy Bonds, a third-generation rancher at the Bonds Ranch in the Saginaw area, said she thinks that a livestock ID system is a good idea, as long as it’s voluntary. Her family ranch already uses an electronic tracking system for its cattle. But the federal government right now isn’t prepared to deal with data on every livestock animal in the country, she said. “I think it’s a good idea. They just have a lot of kinks to work out.”

Jack Chastain, CEO of the Texas Hereford Association, said he’s “kind of on the fence about it. There’s too many questions unanswered yet, as to who’s going to regulate it, who’s going to keep up the data. I work with a lot of breeders who do not want the government knowing how many cows they own. But with mad cow and Asian flu outbreaks, why not figure out where these things are coming from?”

In Austin on Friday, U.S. Sen. John Cornyn will hold a public policy forum on the issues before the rally. Hutchins hopes that the rally will remind the powers-that-be of the far-reaching implications of this issue. “I understand that as one small farmer, my voice doesn’t carry a lot of weight,” he said. “But when you put together the voices of all of our customers, then I think we have a sizable slice of the population that doesn’t want this to take place.” He and other protesters plan to keep the conversation going until the cows come home. 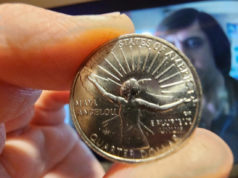