Home Film Film Reviews Since My Baby Left Me
SHARE
Facebook
Twitter
If Black Snake Moan is disappointing, that’s largely because it starts out with one of the greatest premises of any movie in recent years. 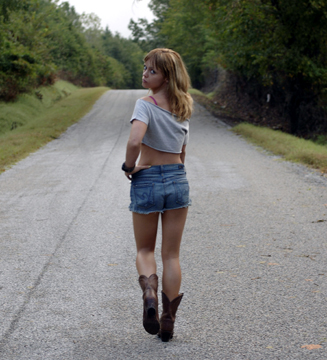 It’s about Rae (Christina Ricci), a young woman in the Deep South who’s screwed up way beyond her years, thanks to a childhood full of sexual molestation by her father. When her boyfriend Ronnie (Justin Timberlake) is shipped off to Iraq with his National Guard unit, Rae spirals out of control. Unable to handle what she sees as abandonment, she ingests all manner of alcohol and drugs and has sex with every guy in her path. A grizzled blues musician named Lazarus (Samuel L. Jackson) discovers Rae after a particularly disastrous night of partying, left on the roadside near his house unconscious, beaten, physically sick, and wearing only a cut-off t-shirt and a thong. After experiencing firsthand her sexual advances and her fits of fever-induced delirium, Lazarus — who has a few abandonment issues of his own — decides to cure her of her “wickedness” by chaining her to his radiator.

OK, if you don’t love this setup or at least aren’t somewhat intrigued, you probably should give up on movies altogether, along with most other forms of mass entertainment, and spend the rest of your life in a cork-sealed room listening to Bach. This story and the film’s grainy stock (which mimics the look of a low-budget 1970s exploitation flick) promises explosive drama that sadly never quite comes about.

Taking its title from a 1927 blues song by Blind Lemon Jefferson, the movie is written and directed by Craig Brewer, who caught our attention two years ago with his feature debut Hustle & Flow. What’s become clear upon seeing his second film is that underneath all his movies’ grimy surfaces and rural Southern Gothic trappings, Brewer is a deeply conventional filmmaker at heart. Having come up with a premise that’s brimming with sadomasochistic racial and sexual overtones, he pretty much ignores them in favor of a soft-hearted tale of redemption. Jackson is actor enough to show Lazarus being tempted by this mostly undressed and extremely available girl, but Brewer never pursues that angle and instead saddles the character with a watery romance plot opposite a kind, ladylike pharmacist (S. Epatha Merkerson). The battle of wills between Lazarus and the imprisoned Rae never ignites into high drama, and Rae’s spiritual cure doesn’t even work on its own terms — Lazarus’ treatment of her amounts to little more than singing blues songs and reading a few Bible verses at her. Her conversations with Lazarus and his preacher friend (John Cothran Jr.) never come near what’s ailing her. Instead, the plot is resolved via a forced, arbitrary climax when Ronnie returns from Iraq in disgrace.

This is all too bad, because the film does boast some solid achievements. For one thing, there’s the quite attractive Ricci looking here like she’s about to die. With her sunken cheeks, translucent skin, and deep bags around her eyes, she gives off the appearance of a wrung-out dishrag. Brewer films Ricci in ways that emphasize how small she is, which is a nice way of pressing home Rae’s fragility. Even so, the actress throws herself unreservedly into a role that requires more uninhibited emotion than subtlety and shading. Lately a boatload of actresses have given terrific performances as girls who’ve been defiled by their daddies (Maggie Gyllenhaal in Sherrybaby, Penélope Cruz in Volver, Sienna Miller in Factory Girl, Brittany Murphy in The Dead Girl — you can catch that last one in Dallas this week). It’s to Ricci’s credit that her work is as memorable as any of these.

Some viewers might feel inclined to dismiss Brewer’s deep-fried Southern atmosphere as mere window-dressing, but that’d be a mistake. His films feel starkly different and more authentic than most Hollywood depictions of the region — compare Bridge to Terabithia and you’ll see how this movie evokes hardscrabble Southern life in much more convincing terms. Helping create the atmosphere is a heavy dose of old-school blues songs on the soundtrack, many of them sung by Jackson. Though he may not be an authentic bluesman, he does a hell of an impression of one, wailing to good effect over his solo guitar or a full band. The movie also contains some understated funny moments that acknowledge the absurd humor in the situation, especially when the preacher discovers the chained nude white girl in the middle of Lazarus’ living room.

These things make Black Snake Moan good fun to watch. Still, this story could have busted some taboos and explored our culture’s anxieties about sexuality, child abuse, and the relationship between a young white woman and a much older black man. It’s sad to watch it devolve into a hazy, feel-good tv movie. All the hot naked actresses in the world can’t quite take the sting out of that.